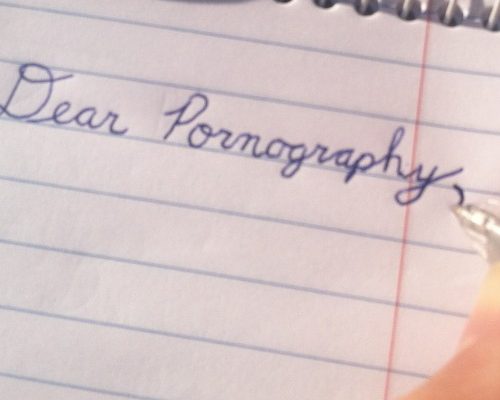 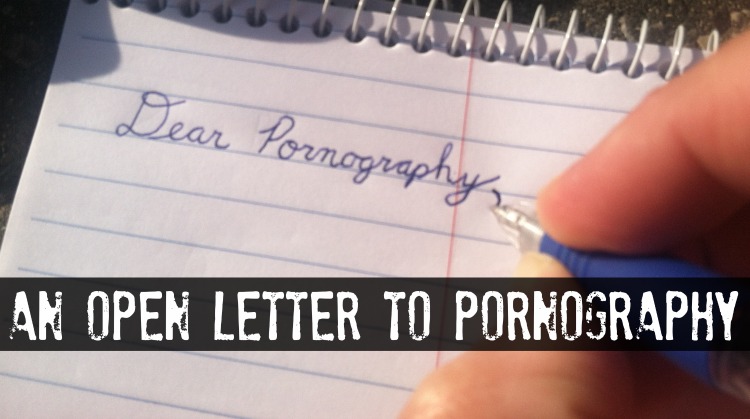 I met you at a young age. As memory serves, I was around the age of seven the first time I was shown a pornographic magazine. Little did I know that it would be the beginnings of the longest relationship I have ever known, outside of that with my mom and my brother. From the moment I met you, I was hooked. You had me.

In elementary school, I dabbled in you; steeling glances of my step-father’s magazine when no one was around. In Junior High we began a torrid affair. I began sneaking those magazines back to my bedroom where I got to know you intimately. It was from you I learned what sex was like. Even then, there were consequences that came from my relationship with you—like the time my step-father found one of his magazines under my mattress and grounded me from a party (which cost my girlfriend at the time). I paid dearly, but it wasn’t enough to keep me from coming back to you.

High school, it seems, you left me alone. I had girlfriends that occupied my time, and I was busy devoting myself to school and to church. I am sure we had encounters, but for what ever reason, that time isn’t as prevalent to me as others. But you were there waiting for me.

College came, and we didn’t spend much time together, probably because there was always a roommate there to dissuade me from doing anything that would put me in a compromising situation. We dabbled a bit—you, me and my fiancé at the time—but I didn’t need you. You were always there though, waiting for the day I would come back to you.

After college, we renewed our relationship. I discovered the Internet, and countless sources of pornography to entertain me and keep me company.

When I met my wife, you were there. I knew she didn’t approve, but I tried to keep our relationship secret.

When I got married, I hoped you would go away, but you didn’t. You were always there. Calling to me, enticing me. I gave in often. I swore it would never happen again. It did. Over and over again. I caused my wife so much pain, so much heartache. My wife begged me to stop, prayed for me, supported me while I went to counseling, but ultimately it became too much. Knowing what the consequences would be, I chose you. I always chose you.

What you delivered was just the opposite. Guilt. Isolation. Shame. Regret. Remorse. A life alone. You lied to me.

Because I chose you, my life and the lives of those around me look very different.

Because I chose you, I am now separated from the four people I only now realize I love the most: my wife of 18 years and my three children.

Because I chose you, my daughters have come to the realization that I was never there for them, partially because I was always consumed by you and consumed by the guilt that came from you.

Because I chose you, I have spent most of my life feeling incapable and ill equipped to lead my family spiritually as I have been called to do.

Because I chose you, I have lost track of the number of lies I have told to family and friends to hide my guilt.

Because I chose you, my wife spent our 18 year anniversary with our children instead of me.

Because I chose you, my children spent Father’s Day with their mother instead of me.

Because I chose you, my wife wants to end our marriage so she can be free of me. She never wants to go back into a relationship of lies, deceit, and isolation. I don’t blame her.

Because I chose you, my daughters have asked me to divorce their mother so they can all start over again. I don’t blame them either.

Because I chose you my friends have deserted me, tired of being deceived yet again when they find out I have run back to you despite telling them I left you for good.

Because I chose you, sleep doesn’t come until very late most nights, as I lay in bed, pondering my actions, and the hurt they have caused those I love most.

Because I chose you, my wife has spent the majority of our 18 years in marriage on her knees before God, asking Him to help her fall in love with me because she couldn’t do it on her own.

Because I chose you, I have spent my adult life mired in guilt and shame, feeling defective and unlovable by God or anyone else. My relationships have been distant and fragmented so no one would have to get to know the real me.

Because I chose you, my beloved wife, who you gave to me to look after and take care of, has been cheated out of years of intimate bedtime conversations where we shared our hopes, our dreams, our fears, all out of my selfish fear that I would have to open up and share true feelings and struggles.

Because I chose you, I have had to surrender leadership positions in my church, doing what I love to do most, which is singing and leading people in worship.

Because I chose you, I attend church on Sundays alone, trying to ignore the glances from the people that know us, and trying not to wonder what they are thinking about me right now.

Because I chose you, my wife forbids my son to come to the place I am staying right now because she doesn’t trust that I can provide an environment free from pornography from my son. She’s right: I haven’t earned back that kind of trust yet.

Because I chose you, my daughters don’t want a relationship with me, fearing the pain of being betrayed yet again. I don’t blame them.

Because I chose you, I have spent thousands of dollars of our hard earned money on counseling sessions that never worked.

Because I chose you, I have made poor financial decision, hoping that I could buy my guilt away.

Because I chose you I am unwelcome and unwanted in my own house. I have to leave my house every night after spending time with my son; a reminder daily of the consequence of my actions.

Because I chose you, I wear the title or badge of “Hello my name is Sex Addict who destroyed his family, and is reaping what he sowed for 18 years.”

Because I chose you, I have had to seriously ponder my salvation, and wonder if am truly saved by God.

Because of you I identify with Matthew, the tax collector and one of Jesus’ chosen 12. Matthew was originally named Levi, so he was quite possible part of the tribe that was supposed to lead the Jews spiritually. Instead, he became a tax collector, one of the most reviled occupations of the time. No doubt, Matthew disappointed his family greatly, who probably had much higher hopes for him than to be a tax collector. Like Matthew, I had never stepped into the role God had laid out for me. I was to be a father, a spiritual leader for my wife and my children. Because I didn’t, someone else had to. In addition to being mom and wife, my wife had to become spiritual leader, disciplinarian, and so many other roles she was never called to be. Jesus called Matthew despite his sins. He chose him to make a difference. Like Matthew, he wants to use me to make a difference.

I want to make it clear to you, pornography. I choose you no longer. Just like my family doesn’t believe my promises because I have shattered their trust, I refuse to believe your promises because you have shattered mine. Contrary to what you promise, You only offer a life of regret, remorse, emptiness, shame, isolation, hurt, financial ruin, spiritual bankruptcy. I choose light. I choose life. I choose relationship with God and with my family. I choose to make sure that my family knows every day that they are loved and treasured. I choose every day to choose God and life over pornography and death.

You may think you have won for now, but this battle is not over. I will never come back to you. You have caused too much pain, too much destruction. I will never stop trying to reconcile with my wife and children, and I will not stop bringing your lies to light. There are thousands, probably millions of women and children experiencing what my family has experienced for the last 4+ months because men all over the world are choosing you. I will make sure they know my story. I will make sure they know that you are nothing but a liar who promises so much, and gives so little. I will help them win.

You will not win. As a matter of fact, you have already been defeated. You see, I have a God who loves me, and not only loved me so much to send his Son for me, but he left me something as well. He left me his Holy Spirit that lives in me. If this Holy Spirit had enough power to raise Jesus from the dead, this same Holy Spirit will surely give me the strength to resist you. He gives me a way out every time you try to entice me. I will choose this way out. Even if I never get my wife back, even if my children never want to have the kind of relationship we should have had from the beginning, I will not come back to you. We are through.

God wins. Every time he wins. He is undefeated. Mark my words. You are finished. We are finished. Perfect love wins. There is hope in the name of Jesus. There is power in the name of Jesus. He wants me more than you do, and I know you want me dearly. It must anger you to know I am leaving you, and I expect you to come at me harder than you have ever come. Bring it on. My family means too much to me. I just wish I had realized it a long time ago.

Comments on “An Open Letter to Pornography”