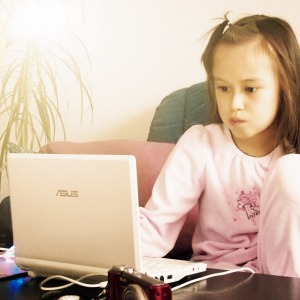 For many parents, the amount of time a child spends online is not their primary concern about technology. Parents are often most concerned about the content their child consumes online—is the information false or reliable, harmful, or helpful?

But making clear guidelines about the times of day your child is online can radically change the way they use the Internet.

Since 2007, there has been a sharp drop-off in the amount of face-to-face time families spend together in Internet-connected households. In a recent study by Orange, 32% of parents said that technology separates members of their family. Another study among a large sample of adolescents indicated that, in general, the Internet does not improve teens’ relationships with their parents, and the Internet consumes time they might have spent with their families.

Additionally, the Orange study also found that 49% of tweens and teens say their parents complain about technology because it interferes with homework getting done.

In trying to prevent these conflicts, parents can limit the specific times of day online when family time or non-Internet-related homework is planned. Do you like to have a game night with your kids once a week? Prevent them from getting distracted online at those times. Do you want your kids to focus on getting homework done right after school? Block the Internet on their computer so Facebook and Twitter don’t become a distraction.

2. Allowing the Internet only at certain times encourages disciplined Internet use.

Teens today spend an average of 30 hours a week in front of a screen. Much of this is time spent online: 63% of teens get online every day, and many do this multiple times a day.

The compulsion to be always online has been a growing problem among teens and adults alike. Some speak of “Internet addiction,” the need for “digital detox,” or the need for families to “unplug.” The Orange study found that 56% of tweens and teens have personally made a deliberate choice to disconnect from technology so they could have a break from it. Parents also have noticed the trend in their homes: 58% of parents say they have been trying to teach their children how to use technology without getting addicted to it.

By having set times when Internet use is allowed, parents can train their children and teens to spend their online hours wisely. If kids know they have a two hour window in the evening to be online, they will limit the amount of time they spend doing frivolous or unproductive activities.

People often say, do, and see things online they wouldn’t in “the real world.” People often feel freer to explore places they wouldn’t explore when they believe nobody is watching them. Dr. John Suller says this issue is so pervasive it actually has a name: the online disinhibition effect.

These online temptations come in many forms, but they fall under two general categories: content and conversation.

It is wise for parents to block the Internet during times of day when these activities would be the most tempting (after bedtime, times when parents are gone from the house, etc.).

In many homes, parents lay down rules about Internet use. But in numerous surveys, when both parents and teens are asked about those rules, major discrepancies exist. One large-scale study of families found that while parents were able to articulate the rules, children either forgot them or claimed the rules were negotiable. In families where teens are the technical experts in the home, studies have shown that these adolescents tend to monopolize the computer and restrict its use by other family members.

Clear and consistent guidelines about when the Internet should and should not be used offers parents a perfect opportunity to exert their authority in a beneficial way. Some studies have shown that when parents are more authoritative when it comes to the Internet, teens spend less time online, are less likely to visit inappropriate websites, and are less likely to disclose inappropriate information online.

1. Use Technology to Help

Use software to make blocking specific times of day easy. Covenant Eyes software not only filters and monitors all the websites your children visit, filtering also allows you to block different times of day.

You can customize the settings for each Internet user in your home. So if you want to give different kids different time restrictions, each user can have their own settings that you control.

Time-of-day blocking is available for both Mac and Windows computers. Sign up now to try it out!

Authoritative parents are the most likely to help kids develop strong character. When setting time restrictions on Internet use, it is important to set time times that are reasonable and allow your child to enjoy the Internet and all its benefits.

After publishing The Family and Technology Study, the think-tank at Orange stated, “While it is certainly healthy to think through standards and limits, we have to make sure that there aren’t double standards. Ultimately, we should decide what type of relationship we want our kids to have with technology, and then we should do it.”

This is good advice. If you set time restrictions for your children, consider doing it for yourself as well. They don’t have to be the same restrictions, but it is important to communicate to your child that they aren’t being targeted because they are young.

Blocking times when your kids can get online without creating an alternative only creates a void. Do you want to have more family time? Plan it. Do you want your kids to get outside more or take up a hobby? Plan times to take them outside or give them the resources to develop their skills and interests.

Don’t just cut them off from the Internet. Teach them about the importance of face-to-face relationships and encourage them to make connections.