6 Marks of Biblical Modesty: How God Brings Sexy Back 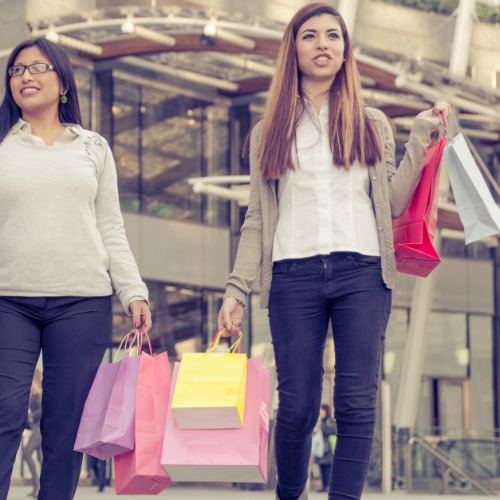 Modesty is a controversial topic, especially when you throw God into the mix. Some simply cannot fathom, amidst all the great injustices in the world, that God actually cares if a girl wears skin-tight pants with the word “Juicy” written on them.

But in the end, it is the Word of God that should drive our discussions about modesty. What has God revealed about it?

First and foremost, a biblical definition of modesty must focus on the heart. Biblical modesty is primarily about our motivations. In addition, modest dress is also about discernment, having an awareness of others and our environment. 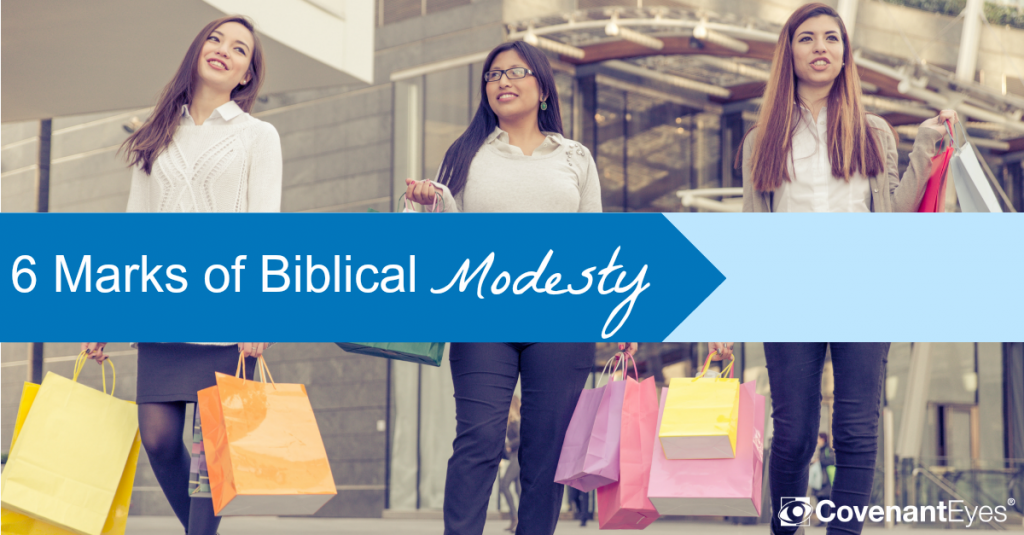 In a recent conversation, a woman I spoke with seemed deeply offended when I suggested a woman’s manner of dress could tempt a man to lust. She wasn’t denying the claim that men lust after women, but she was emphatic that women are not to blame for a man’s lustful thoughts and actions.

She’s right, of course. A person is never guilty of another person’s sin.

This woman’s protest is, in part, motivated by a desire to fight various rape myths in our culture. When a girl dresses scantily, goes to a college party, gets drunk, makes out with a dozen guys, and then is raped, for some there is a tendency to say, “Well, she was just asking for it.” This kind of victim-blaming, sadly, leads some to temper any compassion for such women when they are abused.

Let’s be clear: victims of rape are not guilty of their rape. The girl who walks across campus at 2 a.m. and gets assaulted is not to blame for the crime committed against her. Similarly, victims of another’s lust do not thereby mean a woman is guilty of lust. She should never be made to account for another person’s sin.

So how then do we define biblical modesty? Where does modesty fit into the Christian ethic?

“I desire…that women should adorn themselves in respectable apparel, with modesty and self-control, not with braided hair and gold or pearls or costly attire, but with what is proper for women who profess godliness—with good works.”

Christian women should concern themselves with modesty because the Bible does. This text is a primary example.

1. Modesty is not anti-fashion.

At the outset, we should take note that Paul is not anti-adornment. The force of his statement is positive: “women should adorn themselves.” These are not the words of an anti-fashion prude. The same word “adorn” is used to speak of a bride beautifying herself for her husband (Revelation 21:2). It is a term that expresses being ornamented, well-kempt, and put in order.

The question for Paul isn’t about whether a woman should ornament her body, but how.

2. Modesty is about who you worship.

In the context, Paul is talking about how women should prepare themselves for gathering at church. Women are commanded to adorn themselves in a way that is fitting for worship. If they “profess godliness”—that is, they desire to show God honor and reverence—how should they dress?

Paul puts his finger on the trigger of the problem. In Ephesus, the original destination of this letter, the cultural elite were known for their gaudy and extravagant wardrobes, their elaborate hair styles, and their expensive clothing that communicated extraordinary wealth. Paul paints a picture of this for the Ephesians Christians and says, “Don’t mimic that. When you come to church, come dressed in a way that shows you desire for the attention to be on God, not yourself.”

A person’s manner of dress, or even their preoccupation with clothing itself (Matthew 6:28-30), is often indicative of a heart that loves self more than God.

3. Modesty is about behavior and attitude, not just clothing.

When Paul says that women should wear “respectable apparel,” the term “apparel” is probably translated too narrowly: it is a term that encompasses not just clothing, but one’s whole demeanor, attitude, and actions.

From the clothing she wears to the way she carries herself, a Christian woman ought to be seemly and well-ordered (as the text here says, “respectable”). Ultimately, what should adorn a woman is not just clothing but “good works.” As Christians, we are being remade by God for good works (Ephesians 2:10). Christ died so that we might be zealous for good works (Titus 2:14). Women should seek to dress their lives in works that do good to others, marked with godly love.

This means biblical modesty is not simply about what we wear, but how we act, how we communicate, and how relate to others.

In this text Paul says a woman’s apparel should be worn with “modesty.” Other translation opt for the word “decency.” The King James Version translates this “shamefacedness,” which gets more to the heart of the word.

It is talking about a demeanor of reverence–showing respect to oneself and a regard for others. It even carries the connotation of “bashful.” Connected to the term “shame,” the word implies the idea of grief over sin that is in the world—that a woman would be so sensitive to sin, knowing that sin is offensive to God, that she would never come close to trying to provoke it in others.

No, a woman is not guilty of a man’s lust if she dresses with the intention to allure him. Let him account for his sins. But she is guilty of a lack of shamefacedness, for treating sin lightly. A heart of modesty is motivated by a love for one’s fellow man.

Paul didn’t just paint broad strokes when talking about modesty; he gave specifics. He said braided hair and gold or pearls or costly attire were out of place for a truly modest woman.

Some knowledge of Roman culture is helpful for understanding what Paul is saying. In Paul’s day, Greek hairstyles for women were fairly simple: hair was parted in the middle and pinned in the back. But a culture change was sweeping the region. Women in the imperial household were wearing their hair with elaborate curls and braids, covered in expensive ornaments. The elite throughout the empire copied this style.

For Paul, the appearance of braids and ornaments was more about what the fashion communicated. They carried connotations of imperial luxury and conjured up images of notoriously immoral Empresses like Valeria Messalina and Poppeaea Sabina, ancient equivalents of Cosmopolitan cover girls.

The poet Juvenal, a contemporary of Paul, gives a vivid description of this cultural trend:

“There is nothing that a woman will not permit herself to do. Nothing that she deems shameful. And when she encircles her neck with green emeralds and fastens huge pearls to her elongated ears, so important is the business of beautification. So numerous are the tiers and stories piled one another on her head that she pays no attention to her own husband.”

Similarly, the philosopher Philo gives a description of a prostitute in his writing called “The Sacrifices of Cain and Abel”:

“A prostitute is often described as having hair dressed in elaborate braids, her eyes with pencil lines, her eyebrows smothered in paint and her expensive clothes embroidered lavishly with flowers and bracelets and necklaces of gold and jewels hanging all over her.”

Paul’s description of immodest dress conjured a picture of someone preoccupied with appearance, fashion, luxury, and sexual prowess. Similarly, modern modesty standards are not about arbitrary rules of how much skin is shown or how low-cut something is, but about the messages and values our clothing communicates.

6. Modesty is about true freedom, not repression.

More often than not, modesty standards are seen as repressive, arbitrary rules that restrict a woman’s creativity and freedom. But when modesty is motivated from the heart, the exact opposite is true.

Habitual immodesty is often, though not always, fruit of a kind of slavery. A woman may be enslaved by her desire to attract a man. She might define her worth by her fashion sense, her sex appeal, her image, her bust size, her weight, or the brand names she wears. This kind of slavery is widespread because sin impacts us all, and in today’s sexually charged, media-saturated culture, many women fall prey to this kind of slavery.

But as Christians we are free from the slavery of sin because we are united to Christ. Paul exhorts us to live out this freedom: “Let not sin therefore reign in your mortal body, to make you obey its passions” (Romans 6:12). When it comes to modest dress, we can follow Paul’s next statement quite literally: Do not present the members of your body to sin as instruments for unrighteousness, but present your members to God as instruments for righteousness (v.13). Paul wants Christian woman to have self-mastery in their wardrobe choices, to be totally free from worldly ways of defining worth, beauty, and sexiness.

Ironically, it is not just those who are scantily dressed that are enslaved, but even those who pride themselves on their modesty. “Modest is hottest,” they say, unaware that in their own hearts, they are still enslaved to a preoccupation with their physical image, still defining their worth by their outward adornment.

Taken together, these aspects of biblical modesty help to give us a working definition.

Modesty is a respectable manner of adorning one’s body and carrying oneself, born out of a freedom from a worldly definition of beauty and worth, and motivated by a hatred of sin and a desire to draw attention to God.

When it comes to the subject of modest clothing, the first question we should ask ourselves is: What am I trying to accomplish by what I wear?

123 comments on “6 Marks of Biblical Modesty: How God Brings Sexy Back”