TV or no TV? Internet or no Internet? Facebook or no Facebook? As we navigate the waters of life, these questions and other moral dilemmas seem to await us at every turn. So many of life’s challenges are not specifically mentioned in Scripture, therefore we often find ourselves unsure of the best way to guard our lives and families from the dangers of technological advances without rejecting them altogether. Stories about the prevalence and destructiveness of pornography, the role of Facebook in divorce, and the increasing vulgarity of modern-day television seem to abound.

Several approaches can be taken towards technology. One approach is the complete isolation approach, which involves isolating oneself and one’s family from all technology and media. Those who take this approach have the attitude that all media is evil and corrupt, and therefore to be avoided at all costs. This might include getting rid of the television, canceling the Internet, and banning any other forms of media. The benefit of this approach is the avoidance of all temptations that may come via these forms of media. The problem with this approach is that it is nearly impossible to completely avoid using technology and media. The idea of creating a temptation-free environment is not really possible, because, according to Jesus, the real thing that defiles us is not what is outside but what is inside our hearts. “For out of the heart proceed evil thoughts, murders, adulteries, fornications, thefts, false witness, blasphemies; These are the things which defile a man” (Matthew 15:19-20).

Another approach towards modern methods of communication and media is the total inclusion approach, which completely embraces everything that our world has to offer via media, technology, and communication. The obvious danger with this is that God’s Word tells us to “Love not the world, neither the things that are in the world…For all that is in the world…is not of the Father, but is of the world” (1 John 2:15-16). If permitted an unmonitored existence in our lives and homes, the things of this world can be conduits of great evil and tremendous temptation.

A third approach is the wise integration approach which strives to use the world without abusing the world (1 Corinthians 7:31). Many things in this world, such as the television, the Internet, Facebook, and magazines are not intrinsically evil. They can be used for good or evil. Without a doubt, much evil is broadcast every day on the television; however, the same television can be a vehicle for the gospel of Jesus Christ. According to a recent article in The Telegraph , Facebook is being cited more and more as a cause of divorce. The article says that one family lawyer expert said, “she had dealt with 30 [divorce] cases in the last nine months and Facebook had been implicated in them all.” Does that mean that all married people who use Facebook are going to get a divorce? Of course not. In the same article, “a spokesman for Facebook said it was ‘tosh’ that Facebook could ruin a relationship. ‘It is like blaming your mobile phone or your emails,’ he said. ‘Does being on Facebook force you to do something—absolutely not I would say.’”

Despite the fact that media and technology can be used for good or evil, we would be very foolish to completely ignore the dangers associated with many of them. Much discretion and wisdom are necessary as we enter the world of social networking, social media, Internet, and technology. We need to remember many Biblical teachings and principles as we seek to integrate the good potential of modern media into a desire to glorify God.

Job 31:1 gives us such a principle: “I made a covenant with mine eyes; why then should I think upon a maid?” One of the things that Job did to live righteously was guard what he allowed his eyes to see. He made a covenant with his eyes. A covenant is an agreement. He made a commitment to not look lustfully upon a woman. Because he did this, he was able to control his thinking. He says, “why then should I think upon a maid?”

One software program that many people have found effective in making this covenant with their eyes is Covenant Eyes. Their accountability software is not a filter but does help you be open and honest about what you view on the Internet in your life and home. The Covenant Eyes website says, “By age 18, 90% of boys and 60% of girls are exposed to Internet pornography.” Having a program such as this will help you as a person and as a parent to keep your mind and heart pure and the minds and hearts of your children from unnecessary corruption. Foolishness is already bound in the hearts of our children; we don’t need to provide them with unlimited access to sin on the Internet.

Another important principle is that of transparency and honesty. We should make sure that we are transparent with a spouse, a parent, or another mature Christian about the struggles we face. No one should be allowed to have a private Facebook account that their husband or wife cannot view. No young person should be allowed to have private social media accounts that their parents cannot access. Ecclesiastes 2:9-10 says, “Two are better than one; because they have a good reward for their labour. For if they fall, the one will lift up his fellow: but woe to him that is alone when he falleth; for he hath not another to help him up.”

Many other warnings and principles can be found in the Bible. God gave us His Word to be a lamp unto our feet and a light unto our path (Psalm 119:105). We need to study the Scriptures daily, and by doing so we will be able to cleanse our way (Psalm 119:9). We need to pray for wisdom to “walk circumspectly (cautiously), not as fools, but as wise” (Ephesians 5:15) and to know how to integrate modern media into our lives and leverage it to maximize our witness in the world. 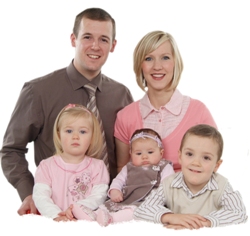 Travis Snode is the pastor of Northwest Baptist Church in Derry/Londonderry, Northern Ireland. He is also the director of Our Generation Training Centre, training missionaries, pastors, and church-planters. Travis has been married to Teri since July 2002.