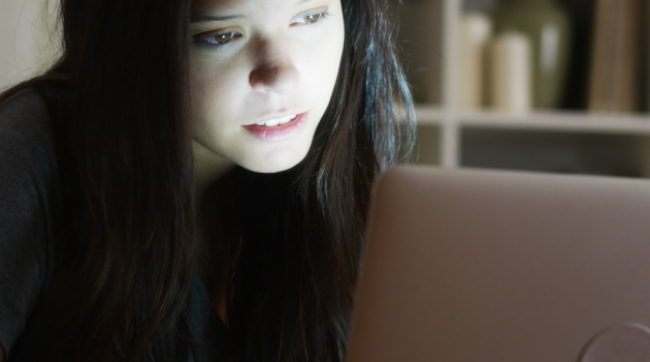 “I stumbled across a porn site by typing in a business address wrong. I went back out of curiosity. Within a matter of days I was doing it on a daily basis; within a matter of weeks, that is all I did. It literally took control and consumed my life. I went from joining all the free stuff, to anything I could to feed my addiction. I began to lie to my husband about working overtime just so I could continue to feed it. I didn’t want to go home. I lost my mind in such a short time that I could not function at work or at home. The pictures I placed before me would haunt me day and night. I became very withdrawn and depressed. Cybersex will take a person down a road they never dreamed they would go. It sucks them into it and there is hell to pay to get out.”

– Testimony from a 35 year-old married woman

My main motivation for writing for men is . . . well, because I am one. But I have decided to begin the journey of writing for women who face similar temptations. I hope I can do the topic justice.

For women the draw of pornography can be as complicated as childhood sexual abuse or as simple as unresolved loneliness. Current statistics show that about 17%, or as much as 20%, of women struggle with some form of cyber-sexual addiction. As many as 1 of 3 visitors to all adult websites are women.

Although a similar proportion of men and women engage in real-time online sex (called cybersex) with another person, significantly more women than men admit that their online sexual activities have led to real-life sexual encounters.

The subject of pornography addiction among women really needs to be discussed in the larger context of “sex addiction” in general. There are few clinical studies that have been done in the area of sex addiction, but those have proven to be a very helpful starting place.

Sex addiction manifests itself in many ways. The four basic manifestations are (1) stereotypical sex addiction, (2) relationship addiction, (3) sexual anorexia, and (4) pornography and cybersex. I’ll briefly look at these one at a time.

According to literature from Sierra Tucson psychiatric hospital, “Although anonymous sex is common for women sex addicts, they don’t usually call it that, nor do they often identify with the term on a questionnaire. Women tend to identify more with the scenario of having sex with someone they just met at a party or a bar, rather than the label of ‘anonymous sex.’” Because traditional questionnaires have used male-oriented language, we don’t have many accurate statistics about the percentage of female stereotypical sex addicts.

(2) Ferree also reports, “Most females do fit the pattern of what is normally referred to as ‘relationship’ or ‘love’ addiction. Women are typically involved in a series of serial or simultaneous relationships, or either short-term or long-term affairs. For many women the relationship pull is stronger than the sexual one. In fact, often females report uninterest about the sexual activity itself, including orgasm.” Women in this category have probably begun to suffer losses in a variety of areas in their lives—career losses, family relationships—as a result of their compulsive need to always have a man in their life.

Sometimes this is called an addiction to romance. Sierra Tucson reports, “The ‘love’ to which these women say they are addicted is really an addiction to feeling overwhelmed by emotions such as yearning, or the ‘high’ of romance—it has little to do with love.”

(3) Sexual anorexia is a compulsive aversive attitude towards sex or a binge/purge cycle of sexual activity. This is at the opposite end of the addiction spectrum.

(4) Lastly, we have Internet-based addictions: pornography and cybersex. I will deal with these topics in detail.

Among those who treat Internet addictions, pornography and cybersex go hand-in-hand, but they involve distinct compulsions. Pornography is the depiction of sexual subject matter with the intention of sexually arousing the viewer, typically done through photography or film. Cybersex is a virtual sex encounter between two or more people connected remotely through the Internet. It is a form of sexual role playing: people sending and receiving sexually explicit messages, photos or videos to each other for the purpose of arousal.

Women and Pornography Use

Jennifer P. Schneider of the Arizona Community Physicians reports, “Significantly more men than women reported downloading pornography as a preferred activity,” but that even in her small sample study of sex addicts there were several women who were “visually-oriented consumers of pornography.” In a well-known study, “Cybersex Users, Abusers, and Compulsives,” by Cooper, Delmonico, and Burg, only 10% of the women surveyed used the Web to habitually access pornography.

In order to tap more of the female market, pornographers create porn that specifically appeals to women. According to Mark B. Kastleman, “Internet pornographers often use ‘average looking’ females as their subjects so that the female viewer can more easily relate by fantasizing or imagining herself playing the role. Likewise, they portray both the male and female pleasuring each other equally. . . . In essence, the Internet pornographers have taken the successful ‘soap opera/romance novel’ genre and wrapped it around pornography in order to seduce the female viewer” (The Drug of The New Millennium – The Science of How Internet Pornography Radically Alters the Human Brain and Body).

Cooper, Delmonico, and Burg’s article reports women tend to be more relational in their Internet use and are usually drawn to chat rooms rather than merely viewing pornography. Among their sample of 96 persons whom they termed “cybersex compulsive,” 70% of the 26 women, versus 43% of the 79 men, considered chat rooms their preferred online medium.

Jennifer Schneider reports a similar proportion of men (27%) and women (30%) engaged in real-time online sex with another person, but significantly more women than men (80% versus 33.3%) stated that their online sexual activities had led to real-life sexual encounters.

During her Pure Passion interview, Marnie Ferree, who is herself a former addict, says that she prefers not to call it “sex addiction” for either men or women.  She prefer the term “intimacy disorder,” because at its root, all sex addiction isn’t about sex, but a desire and a need for intimacy.  The core dynamic of this addiction for men and women is a desire for real intimacy: the desire to be known, accepted, have affection, and be approved.  Sex becomes an easy and quick substitute for a lack of intimacy.

. . . a young wife and mother from Georgia, who first saw pornography as a child in the home of a relative, and whose curiosity led her to explore it further as she grew older. She and her husband later rented X-rated videos after hearing it would help their faltering sex life. “That’s the ugliest lie out there,” Julie explains. “Instead of bringing you closer, it drives a wedge between you and your spouse!” . . . As the problems persisted, Julie’s husband withdrew from her and she turned to porn to ease her increasing loneliness. “I was using it as a tool to escape the problems in my marriage.”

She didn’t go looking for it in the beginning. “I was seeking companionship. In chatting with other lonely people struggling in their marriages, I learned of some Internet sites I could visit to make friends and have fun. At first, the sexual talk in these chatrooms seemed harmless and non threatening. My loneliness and craving to feel wanted drew me into relationships I really didn’t want.”

. . . 30 and single, wasn’t particularly lonely, but she was in search of her “soul mate.” She’d developed her ideas of romance and love from popular novels, and believed much of a woman’s worth is based on her sexuality—which led her to Internet pornography. . . .

“I thought no other women struggled with this addiction. By feeling all alone, I lost hope.”

Maggie had promised herself she would stop. But at the end of another long day filled with work and errands, church and choir practice, carting her daughter to school and helping her with homework, she was beat. After she’d finally gotten her daughter to bed, Maggie fixed herself a cup of peppermint tea and sat down to read her e-mail. She vowed that was all she’d do.

Disgusted, Maggie turned off her computer and went to bed. The high was gone and she felt lower than when she’d started. Tears flooded her pillow as she begged the God she’d known and loved for years to give her help, direction, and answers. She’d never felt so alone.

11 comments on “Not Just a Man’s Problem”