About Us: Greg and Lynn's Restoration Story - Covenant Eyes

I know it isn’t very fancy or creative, but I’ve titled this blog post “About Us,” because, without God’s unfathomable and patient grace and mercy, there wouldn’t be an “Us.”  Without Lynn’s grace to me and obedience to her Heavenly Father, there wouldn’t be an “Us.” Our story is a testimony to the work of God Almighty in the lives of two of His beloved children—one a lifelong sex addict and one His loving daughter.

The Day I Was Discovered

On August 28, 2015, Satan fought to destroy our marriage. The husband of the woman with whom I was currently committing adultery met Lynn in our driveway and presented her with copies of texts and emails proving that what he was telling her was true. The very thought was devastating and overwhelming for her, but like an iceberg, she was seeing only the smallest, visible part of my addiction to pornography, adult chat rooms, dating sites, Craig’s List, and adulteries.

I had been medicating my traumas, hurts, and fears since I was eight years old—a lifetime of addiction and perversion. Satan decided that was the perfect moment to try to destroy our marriage and family by bringing my addiction into the light. I wish I could say I had the courage to “man up” and confess my sexual addiction, but the truth wasn’t in me. It required a crisis to set me on the path of reality and redemption.

I do not have words deep enough or potent enough to express the depth of pain, anguish, and betrayal that rolled over Lynn that night. Like a raging wave in a storm, it threatened to drag her down and drown her. To say she was devastated would be the biggest understatement of all time. Like an onion, we peeled back layer after layer of pain and betrayal only to face a new type or depth of pain we didn’t see coming.

We spent the following days and weeks discussing how I could possibly have done this to her—for 33 years! How could I keep a Godly façade and commit adultery over and over again? Lynn was done with me. She had been the dutiful, dedicated, and Godly wife and mother, but she was done with me. I had had my chances over the years. We were getting a divorce.

When I look back at those first days and weeks, I see only grace in her demeanor.  Oh, was she was angry, heartbroken, and crushed at my betrayal. Our discussions were intense but she was never out of control. She never screamed at me, threw anything, or struck out at me. She never lost her Godly grace. She pulled no punches and spoke the whole truth. She didn’t sugar-coat anything and said exactly what was on her heart.

But she was always gracious. Her response became a significant lesson for me of God’s beautiful grace. We didn’t know what we were doing or where to turn or what to do next. But God did. He was always directing us as we navigated this unknown and unwanted path.

After I confessed to our children (they were all grown and out of the house) one of our daughters-in-law sent me a book recommended by one of her friends. It was called “Pure Desire.” I immediately poured through it as I was looking for any way to get my life out of the pit I’d lived in for so long. The book gave me hope—not for salvaging our marriage as I knew that was gone—but the hope of a real Father to heal the Father-hole in my heart.

Like most addicts, I had financial issues as well. Since neither of us could afford attorneys, I agreed to do all the paperwork for our divorce. If I held out any hope of saving our marriage, fighting over a divorce was certainly not the way.

The Concept of Us

In October 2015, Lynn went away for a long weekend. Up until then, she hadn’t had a real opportunity to process all that was happening, figure out how to move forward alone, and what her life was going to look like. I asked her to take the “Pure Desire” book with her. She took it because our daughter-in-law suggested it, but she made no promise to even open it.

During that weekend, Lynn looked up every Bible verse having to do with divorce and asked God to guide her in her decisions. She wrote me a letter that weekend. As you read the next statement, hear the pain and anguish in your own wife’s heart: in the course of a three-page, handwritten letter, she told me four times that she hated me.

I don’t tell this part to make Lynn look bad. It’s important. It is one of the pieces of our journey that has had an incredible impact on me and my recovery. I had to learn to feel what Lynn was feeling and this letter started me down that path. It broke my heart. It helped bring me to the “broken and contrite heart” that God could work with. Then, she read “Pure Desire.” For the first time since I was “found out,” she saw a glimmer of hope for us. It was only a hint but that’s the most fantastic thing about hope—it is or it isn’t. Even a hint or glimmer of hope is hope. She decided not to make any life-changing decisions until we completed the Pure Desire groups, Seven Pillars of Freedom and Betrayal and Beyond.

What Satan intended for evil on August 28, 2015, God intended to become a demonstration of His power, glory, and grace. The divorce papers turned into separation papers. They didn’t go away as our financial life was in shambles. If I wasn’t going to pass the “test of time” with my sexual purity, Lynn wisely refused to allow my financial situation to follow her.

I started counseling right away and found a Conquer Series group. In January 2016, we began our Pure Desire groups. It was a year of agonizing, intense personal evaluation, and growth for us both. Every Tuesday after my group we “debriefed” about my workbook. Every Thursday after her group we debriefed about her workbook. Even though we were working specifically on ourselves, the concept of us and healing our relationship was always forefront.

God Is Restoring Our Marriage

In October of 2016, we finished our groups and it was time to decide what we were going to do. We went for a drive in the country and ended up at a tiny restaurant in the middle of nowhere. We talked about our future. We still had (have) a lot of work to do. Was I willing to do it? Could I remain pure and live a life of sexual integrity? Did we want to stay together and fight for the marriage I tried so hard to destroy? The answers were all, “yes,” except for the last one. I know how harsh this sounds but it was necessary for us.

That is also the day Lynn extended forgiveness to me for all I’d done.

Today, God is working daily in our lives and marriage. Since the day I was found out I have not suffered a single relapse. We consider that a miracle of God. We are still married and happier than we’ve ever been. Lynn is truly my best friend. God gave Lynn her dream job so we moved to the Oregon Coast. She comes home almost every day and reports that her day was, “perfect,” in spite of the occasional sideways rain. God used COVID to remove all the barriers between me and doing what He sent us to the coast to do. I am now a Certified Professional Mentor and I work with men struggling with habitual sexual sin and sexual addiction. I have been set free from my addiction. Now I strive to help other men find that freedom. 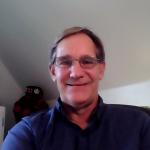 Greg Bruce is a recovered Sex Addict who spent 45+ years in the black pit of pornography, sex addiction, and adultery. In 2015, Our Heavenly Father set Greg free from his addiction and set him on a path of recovery, restoration, and redemption. God has led Greg to a ministry of mentoring men locked in the struggles of habitual sexual sin and helping guide them out. He is the founder and CEO of Created To Be Free Mentoring. Greg and his wife Lynn are blessed to now live on the Oregon Coast where they are thriving under God’s care while showing others that there is HOPE to escape the misery and the mess.

0 comments on “About Us: Greg and Lynn’s Restoration Story”