Jessica Harris is the founder of Beggar’s Daughter, a ministry dedicated to walking with women who have an addiction to pornography. Telling her own story of porn addiction and struggle with lust, Jessica seeks to help other women find hope, healing, and grace. Jessica enjoys traveling and speaking on the topic of female lust addiction and how churches can minister to women who struggle. She resides just outside of Washington DC where she works as a teacher and serves on the Biblical counseling team in her church. She is the author of Love Done Right: Devos—A Journey From Lust into the Love of God.

“You need to stop viewing your past with pornography as addiction and sin and start viewing it as trauma and abuse.”

I sat in a chair across from my counselor, weeks away from my wedding, struggling with guilt and anxiety over my years of pornography addiction. Though my struggle had ended in my early twenties, as I approached marriage at the age of 32, my past hung over me like a cloud. I felt guilty. I felt bad. I had ruined my marriage, I just knew it.

In the midst of my struggle, I told myself that this was an acceptable alternative to sex. I wasn’t like those other girls out there, sleeping with guys, risking unwanted pregnancies and STDs. Pornography seemed like a safe, sensible, even smart alternative to hooking up. Plus, it was the sex education I never had.

After years of watching hardcore pornography, you would think I would feel confident as I approached my wedding.

Instead, I felt broken.

A couple months before our wedding day, my husband-to-be suggested we read a book on sex. He had waited his entire life to be “allowed” to read a book on sex and was excited about the idea. As he suggested book after book, I became indignant. Some of these books had pictures! They had drawings! As I perused one during my lunch break at work, I had a panic attack.

There was this sudden realization that it was going to be me. I was going to be the woman sleeping with the man. Images from years past began to scream through my mind. Women being beaten, brutalized, and abused. That was sex, I thought. That’s what I was willingly walking into. The thought caused sheer panic. That’s when I knew I needed counseling.

For nearly ten years, I had stood on stages and shared my story of freedom from pornography. The difference between freedom and healing had never truly occurred to me until I intentionally pursued healing.

I can’t speak for what pornography does to the men who struggle with it. What expectations it creates, what violence it deems acceptable, what standards it sets.

But I can tell you what pornography did to me as a woman, and the effects ran deeper than I ever truly realized.

My view of sex was damaged.

My trust in my husband-to-be was shaken, through no fault of his own. I envisioned marriage as filled with abusive, demanding sex. Our friendship would be lost and I would become his play thing. I would rather stay engaged forever and leave sex out of it, which was a confusing thought for a woman who had spent years obsessed with it.

As I grappled with the anxiety and fear, I struggled with feeling like this was my punishment—that I deserved to struggle. I had done this to myself. Worse, I had done this to us. Our marriage was going to be hard because I had made bad choices.

That’s when my counselor shared the words that revolutionized my premarital journey and began to set me free. For years, I had framed my past as “addiction and sin” and, as my counselor reminded me, I had already dealt with that. That was already forgiven. What I needed to work through now was the damage pornography left behind.

Too often, as we address pornography in Christian circles, we emphasize the sin. We stress the damage it does to marriage or even how it connects with human trafficking. We cast the addicts and those who struggle as the problem, and if they would just stop watching pornography, the problem would be solved. But this is not the whole story.

We need to pursue freedom and healing.

If our efforts begin and end with “stop watching pornography,” we are missing part of the picture. We are missing the deeper damage pornography itself can cause. We’re missing the fractured relationships, the fear of intimacy, the destroyed body image, the rewired arousal templates, the trauma responses, and so many other areas that need healing.

I believe this is true for both genders, but perhaps more so for women. The shame surrounding a woman’s struggle with pornography can lead her to believe that she deserves to “pay for this” the rest of her life. And that simply isn’t true. 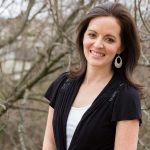