Chris McKenna is a guy with never-ending energy when it comes to fighting for the safety and protection of children. He is the founder of Protect Young Eyes, a leading digital safety organization. Chris practices his internet safety tips on his four amazing children and is regularly featured on news, radio, podcasts, and most recently on Capitol Hill for his research. His 2019 US Senate Judiciary Committee testimony was the catalyst for draft legislation that could radically change online child protection laws. With expertise in social media usage, parental controls, and pornography use in young people, Chris is highly sought after as a speaker at schools and churches. Since 2016, Chris has worked with Covenant Eyes creating educational resources to help individuals and families overcome porn. Other loves include running, spreadsheets, and candy.

Over my years of battle and now victory, there have been two revolutionary concepts that wholly changed my perspective on pornography. In my first post, I explained the concept of a “Complete and Effective Decision About Sin.” In this post, I’d like to share the second concept: “Don’t Stop Believing.” 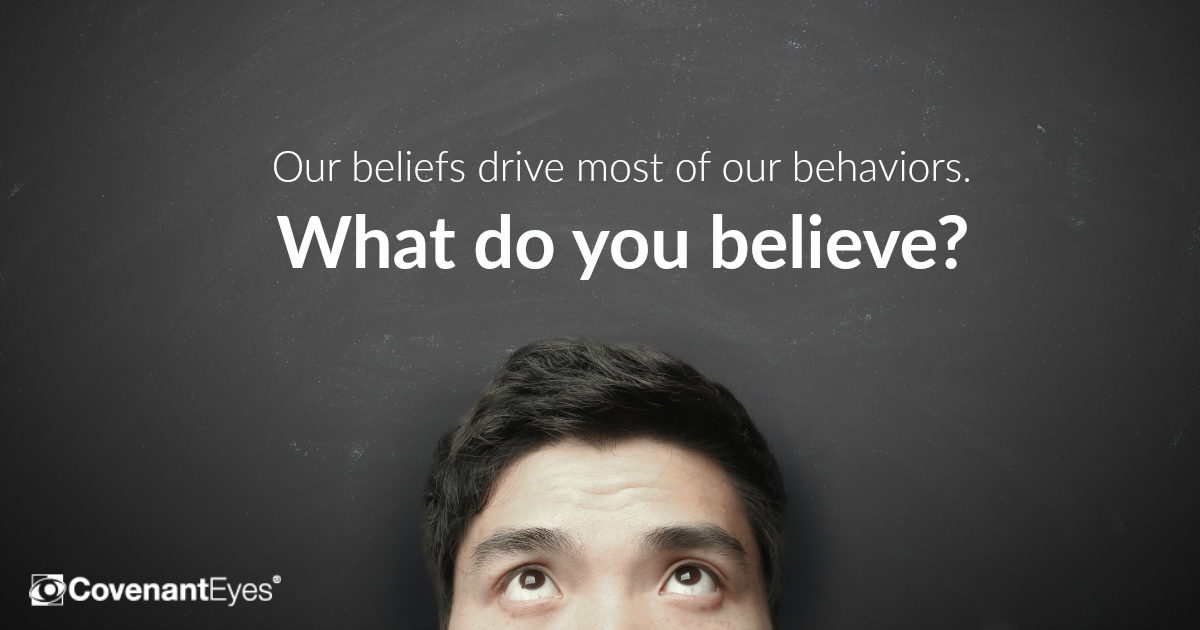 Do you want to confuse a room full of Christians? Ask them this: “What was the first sin committed by Adam and Eve?”

I was speaking to a church youth group about Internet safety, and I asked them this question. You should have seen the looks on their faces. It was a mix between dazed, confused, and the terror of “I’m a good Christian who is supposed to know this answer! But the way he asked it seems like it’s some kind of trick, and so now I’m doubting everything I thought I knew!”

But, I asked them this question because I had just learned something brand new from a very old story.

Not long ago, I listened to a podcast from a talk given at a men’s retreat. The speaker, named Tim, spoke passionately and forcefully about the interplay between behavior and belief. Tim’s thesis was that everything we do (our behavior) is tied to a core belief. In other words, what I really feel about the neighbor who annoys me will eventually show up in my actions through what I say or do.

I was riveted to every word in the podcast.

See, I constantly wrestle against the false doctrine of works-based righteousness. I’m a full-fledged member of the behavior modification club. Part of the problem is this: all of us exist in two realities. On one hand, we are all part of “the world,” where everything is based on a system of “I do it to get it.” But, in the spiritual, Christian realm, everything is based on a system of “He (Jesus) did it, and I already got it.”

What really nailed me was when Tim asked and answered the question about Adam and Eve that I posed to the youth group. Here is an excerpt from his talk where he answers this question (used with permission):

Our beliefs drive most of our behavior and actions. This scares me at first thought. I want to be a screw up because of things beyond my control. I want to justify my sin because I am a sinner and I just can’t help myself. I hate the thought that I sin because I want to and believe it’s ok.

Wow. Sin entered the world before the bite. In other words, the first sin was a lack of belief, not that they ate the fruit.

That was revolutionary to me. I mean, who doesn’t know the story of Adam and Eve? How could it be possible that there was even more depth and meaning to a story I had read 1,000 times?

That’s what God’s Word does. It continues to slice and dig its way into our hearts, relentless in its pruning.

For the word of God is living and active, sharper than any two-edged sword, piercing to the division of soul and of spirit, of joints and of marrow, and discerning the thoughts and intentions of the heart. (Heb. 4:12)

Jesus Calls Out the Fakers

Jesus constantly challenged the practices of the religious elite (Pharisees) who were bent on “try harder” ethics. They did all the right things, but their hearts were hard and stale. Jesus wasn’t afraid to call this out.

One day, the people asked Jesus why He and His disciples weren’t fasting, while the Pharisees were. Jesus answered their question with a few peculiar comparisons to wine and wineskins. You see, Jesus rarely, if ever, answered the surface question. Instead, He tended to raise the discussion to a Kingdom level, pointing towards loftier and deeper places.

And no one puts new wine into old wineskins. If he does, the wine will burst the skins—and the wine is destroyed, and so are the skins. But new wine is for fresh wineskins. (Mark 2:22)

Jesus’ pivot towards wine isn’t an avoidance tactic. It’s a clever way of addressing the real issue, which really isn’t fasting. The practice of fasting can be beneficial, healthy and deeply spiritual, and as a good Jew, I’m sure Jesus would have agreed.

But, their “check the box” belief about fasting and a whole list of other religious practices wasn’t ever going to produce new fruit.

The comparison is a very apt one when we think of the properties of wine and wineskins. When wine is new, it is in a state of fermentation. It bubbles and expands as the fermentation gases are released. A fresh, pliable wineskin can absorb such expansion and slowly age with the wine until the fermentation process is complete.

To put fresh wine into an old wineskin, however, is asking for trouble. The old wineskin has a definite shape and is no longer soft. It is fixed and somewhat brittle. The activity of new wine will stress it beyond its ability to flex, and so both the wine and the skin are ruined. In other words, we can’t put new behaviors into an old mind-set. We can’t get different, long-term results when the core belief system is still broken.

This rant had a profound impact on my heart. It liberated me from more “try harder” ethics and helped me get laser focused on my core beliefs. It helped me create my own list of beliefs, so I could start to see those as “real,” slowly exterminating the lies of pornography.

What about you? What do you believe?

Tim is right. Luke is right. St. Paul is right. Only an iron-clad, tenacious, deep-seeded belief in Jesus Christ has the power to transform a heart of lust.

May you never stop believing.