Bobby Angel is a campus minister and theology teacher at an all-boys' Catholic high school in California. He enjoys writing, surfing, and drinking too much coffee. He and his wife, Jackie, travel often and speak to youth and young adult audiences, sharing the Gospel and the call to a life of chastity. They have two beautiful daughters who won’t let them sleep. Connect with Bobby at jackieandbobby.com. 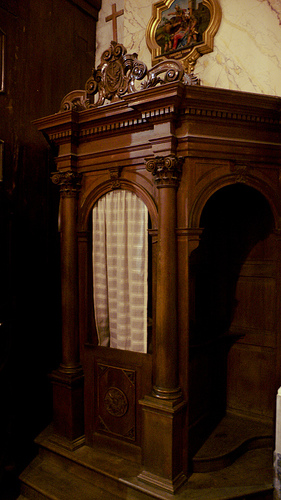 I asked myself this question several years ago. Sitting in a dorm room and staring at my computer screen, it was in this moment of grace that I seriously realized that I had to weed out even the temptation to pornography from my life to begin re-orienting my heart towards authentic love.

I’m a cradle Catholic, was baptized as an infant, and grew up in the faith. After witnessing the example of many amazing priests in my life, I entered the seminary after college to discern my own vocation, but felt a sincere tugging towards married life along the way and found that God was preparing my heart for marriage all along. I’m now engaged to an amazing woman and am working at an all-boys Catholic high school.

Taking what I’ve learned along the way, I’m trying to help the young men whom I encounter understand the power of our sacraments in combating sin, but also the necessity of brotherhood to conquer pornography.

Is the Sacrament of Confession All We Need?

As Catholics, we believe that the sacraments—the actions of the Holy Spirit invisibly at work in the visible elements of our lives—are efficacious and indeed transformative. Christ himself is at work through the priest in Confession. I’ve sat through many, many confessions in my life (and will no doubt sit through many, many more), knowing all the while that God was working through the priest to heal me.

And yet, the sacrament of Confession (also called Penance or Reconciliation) can easily become like a tourniquet that temporarily stops the flow of blood, but doesn’t address the deeper source of infection. As many Catholics can attest, I’ve struggled with discouragement over confessing the same sin again and again, even week after week at times, disappointed in myself and wondering why I can’t conquer it. Especially with pornography, we can leave the confessional feeling great until temptation strikes a few days later (which it will).

Fighting with Others for Purity

Habits and addictions generally aren’t wiped clean with one admission of guilt. Scientific studies reveal how quickly pornography rewires our brains and how ineffective “white-knuckled” chastity can be.

Believe me, self-control alone is not enough. More than just will power is needed. I was tired of falling, failing, confessing, and falling again. Eventually I found myself looking online for Internet accountability sites, knowing that I couldn’t fight this battle on my own anymore. Disappointed with the lack of free applications (I was trying to go the frugal route), I sat back in my chair and almost gave up my search.

But then I revisited a website that provided Internet accountability, effectively sending all the websites viewed within a week to a buddy, a service they charged for $9.99 a month.  A question—rather, a challenge—then seemed to rise up from within my own heart:

I knew the answer. I knew what I was willing to spend money on in any given month, and how I couldn’t rationalize not doing it. I knew what I would have to do in order to seriously commit to re-integrating myself for the sake of my future wife, my future family, and ultimately myself. So I marched out of my room to the dorm next door and asked a dear friend if he would be my “accountability partner.” There was neither surprise nor shame nor scandal on his face. He only replied, “Brother, it would be my honor.”

“As iron sharpens iron, so man sharpens his fellow man” (Proverbs 27:17). I can’t underestimate the importance of having a fellow brother to walk with me on this road. Years after that initial invitation, he still checks up on me regularly. Sometimes it’s been as simple of a question as “How’s it going this week?” and in other moments he’s called me out regarding additional areas of weakness with loving, fraternal correction. It was certainly humbling knowing that my friend was receiving an email once a week listing all the sites I had viewed, and it’s worked effectively in keeping me on the straight and narrow.

He and I pray with and for each other. We take our sin seriously, but ourselves not so much. Humor has proven to be a great diffuser. It’s worth it to find a friend or a priest who you can laugh with—it really helps you to get over yourself. As my spiritual director once joked when he saw me approach for confession, “Back so soon?”

As effective as the sacrament of Confession truly is, we need the love of friends to bolster us up for the daily skirmishes with sin. Christ truly heals us when we sincerely turn back to Him, but pornography is an insidious beast that infects us deeply. To be the best you have to train with the best, and I wanted a friend who would call me out even when I wanted to give up on this journey towards purity. Our true friends lift us up and push us to be the best version of ourselves. I know that it’s easy to have a “Lone Ranger” mentality when it comes to fighting evil, especially in the realm of sexual purity, but we weren’t created for solitude—we were created for community.

Some parishes have begun men’s groups or encourage weekend retreats. If there isn’t a group nearby, you could be called to start one! I’ve become an accountability partner myself for a friend nearby and we’ve begun meeting once a week to talk out our goals and where we need to be pushed.

For anyone stuck in sin or feeling enslaved to pornography, know that there is hope.   Like all other addictive behaviors, we have to be humble enough to first ask for help and allow Christ to have His way with us. Christ continually called his disciples to conversion, to turn back from sin and turn towards true freedom, and “life and life in abundance” (John 10:10). We all yearn for such freedom, but we must first fight for it. A saint is just a sinner who never stopped trying.

The sacraments are there. Our friends are waiting. We just need to put up a fight.