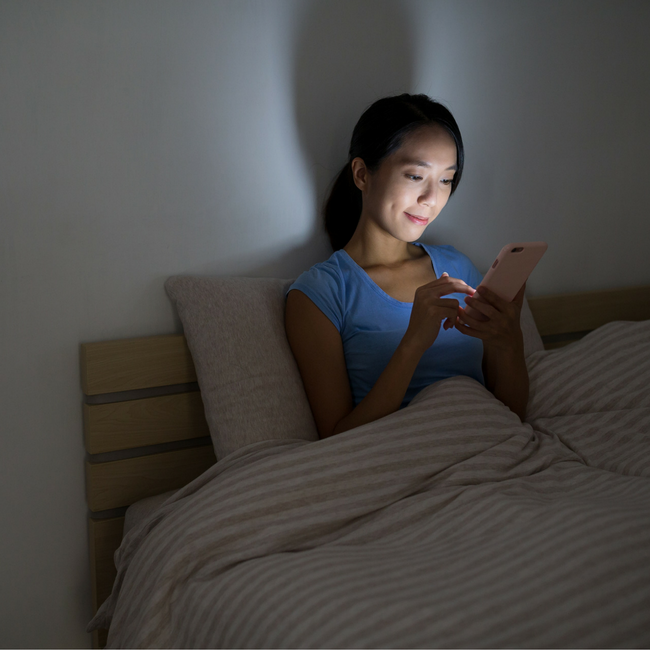 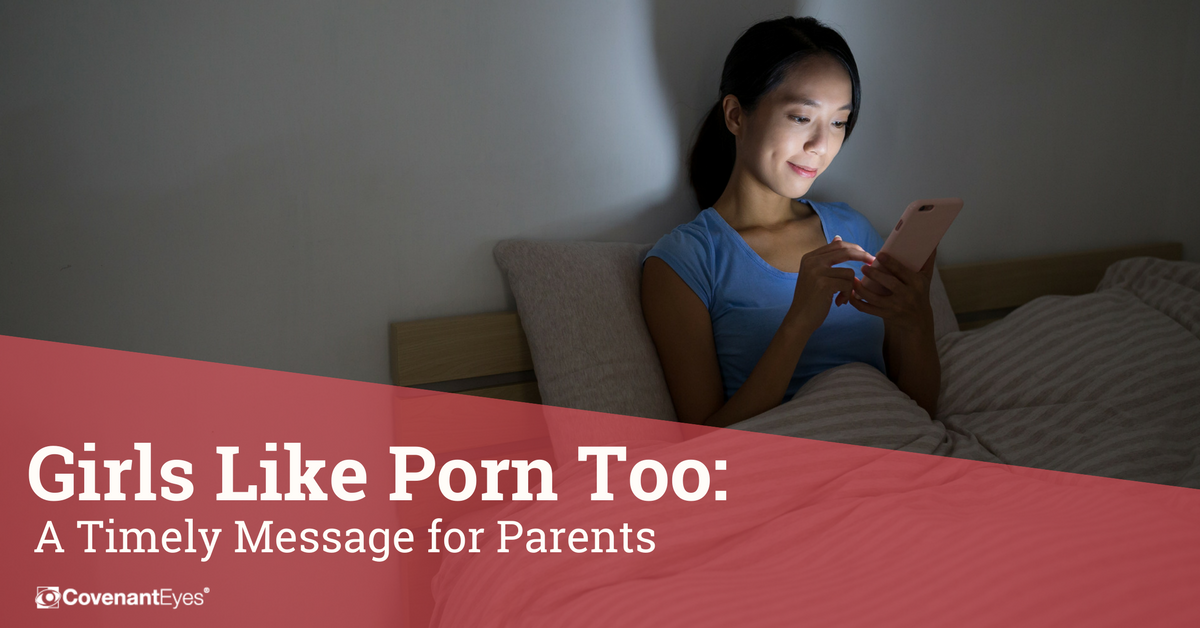 Online sexual temptation is known typically as a “male issue.” But for those like Jessica—and there are more of them out there than you might think—being female did not shield her from the allure of cybersexual temptation.

How Big Is This Problem?

Nearly half of young adult women today believe viewing pornography is acceptable behavior. According to a survey of more than 11,000 college-age women, more than half said they were exposed to sexually explicit material by the age of 14.

For some girls, these exposures to pornography are not just brief brushes with sexually explicit pictures—a pop up here, a link there. On at least one occasion, about 1 in 4 girls sit down to watch Internet pornography for at least a half-hour straight—and with a broadband connection, you can see a lot of hardcore pornography in 30 minutes. About 1 in 7 girls have done this on multiple occasions.

Nearly a third of young adult women intentionally use pornography from time to time, and about 1 in 5 women (18%) do it habitually—every week.

Times They Are A-Changin’

“Women can still become addicted to pornography in the same way that men do,” says Dr. Doug Weiss, a pioneer in sex addiction therapy. He believes part of the reason why we are seeing an uptick in this problem among women today is that women have become avid users of the Internet.

Nearly nine years ago, the magazine Today’s Christian Woman published a story called “Dirty Little Secret” in response to what was perceived as a growing temptation among more than a third of their female readers. Since then, the growth of the adult industry and the accessibility of broadband Internet have only increased the likelihood that women—even Christian women—will get sucked into this underworld of lust.

More than half of the members of the DGM community are women like Jessica Harris: single, Christian, between the ages of 18 and 29. So how does the church teach these young women to handle their sexual desires? “We’re not really taught what to do with them, we’re just told not to have them,” says Harris. “We’re ‘true love waits,’ purity rings, and ‘don’t talk about sex until you’re married.'” There needs to be a new strategy, says Harris, for teaching single, Christian women how to surrender their sexual desires in an age gone mad with lust.

“We can’t forget that the male and female brains are both wired to respond to visual stimulation with sexual arousal,” says Shannon Ethridge, author of the popular Every Woman’s Battle series. “The idea that it’s just a ‘guy’s issue’ is one of the biggest myths of our day.”

Some in the DGM community confess to other kinds of compulsive behavior, saying they feel “out of control” when it comes to activities like sexting (12%), sexually active romantic relationships (22%), or even sex with strangers (15%). 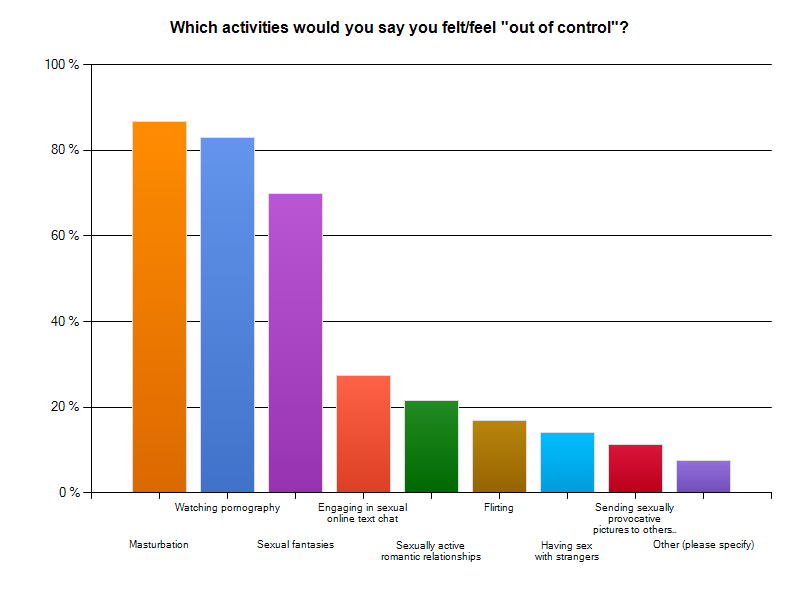 “I decided that day that this was ‘my new thing,'” Crystal says. “This was for me. This made me feel good. And I would keep engaging in it as long as I never got caught.”

Years later, she hit her “rock bottom.” She says, “I am in a hotel room waiting for a person to arrive who I had arranged an anonymous encounter with on the Internet.” There in that moment she came to terms with how far she had fallen. “I’m shaking, just thinking, ‘How did I get here? How did I get to this point that things are so detrimental, so destructive, that I’m allowing myself to be put at risk?'”

“As a contentious mom, I thought I was doing enough to protect my children by getting a filter for our home computer,” confesses Gina Renaud, Crystal’s mother. “But what I didn’t know was how easily my curious teenage daughter could maneuver around its restrictions.”

Recently, Knowledge Networks asked 535 pairs of parents and their teens a number of questions about Internet use. Of the parents surveyed, 64% said they try to monitor where their teens go online, but 42% of the teens said they have tried to conceal where they go online by clearing their browsing history.

For the struggling women in the DGM community, 89% say they were first exposed to sexually explicit material before they turned 18. But even more alarming, 65% said they started habitually and compulsively watching pornography or engaging in cybersex during these same years. This was happening right under their parents’ noses.

Do You Prepare Your Daughters for Sexual Temptations? 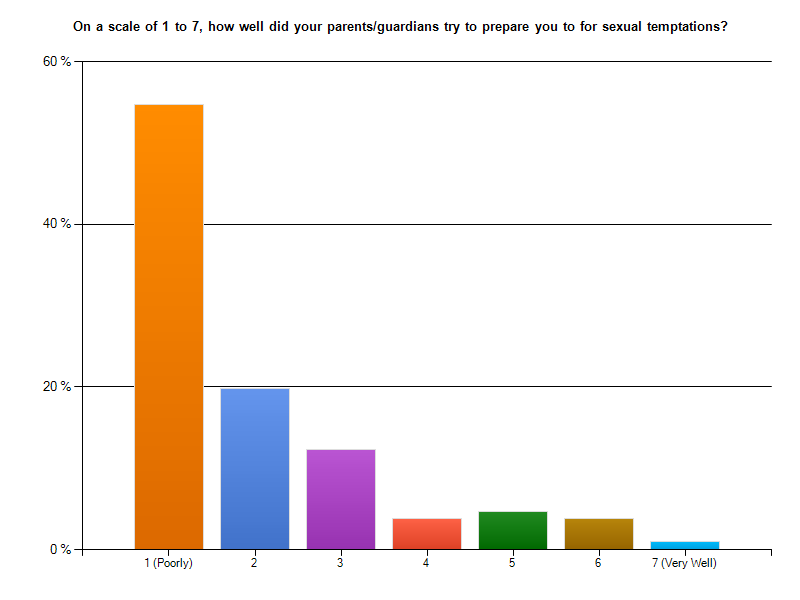 For the vast majority of these struggling women, they do not remember their parents regularly teaching them about the purpose of sex or helping them deal with sexual temptations as they arose.

Taking Advice from Our Daughters

Our survey also asked participants to give some advice to parents about the most important things parents can do to protect their daughters from being attracted to pornography or cybersex. More than 90 women submitted responses.

The #1 thing mentioned in the survey was the need for parents to talk to their daughters about the purpose and pleasure of sex.

Here’s what some of the girls said:

“Instead of fearing talking to your kids about sex, fear the consequences of not having the conversation.”

“Girls need to know enough about sex that they don’t have to go looking for information on the Internet. It’s much better to have a lot of truthful, awkward, and uncomfortable conversations about sex and pornography with your child than it is for her to go seek out the information herself.”

“Teach them the difference between love (the way God intends it) and lust, so that hopefully they can be able to discern the difference. We fall because we are looking for love and an emotional connection and often if we feel some form of disconnection. It’s then that we search for it elsewhere and sometimes unfortunately in the wrong places.”

Here’s what some of the girls said:

“Talk to your children about pornography and about how it harms people, minds, relationships and undermines true intimacy.”

“Don’t let them think it’s only a guy’s problem. It makes it harder to get help when they think they are the only ones. Don’t assume only boys will have this problem.”

Many women who answered our survey mentioned the importance of communicating to our daughters their value as women.

Here’s were some of their comments:

“Tell us that we, as females, are worth more than just sex.”

“We need to be told things like, ‘Do not let other people’s expectations of you to be “sexy” drag you into the lie of pornography. They don’t know how truly beautiful you were made, and they are dealing with their own insecurities. You don’t have to sell out to feel loved, and even if you feel unpopular with guys at this point in your life, you can trust that God will provide all you need.'”

“Above all, let them know they are loved by God (and by you). When a young girl feels and believes that she matters, she doesn’t need to seek fulfillment or satisfaction elsewhere.”

4. Protect her from pornography.

Many survey participants said a parent’s attitude can make all the difference in the world.