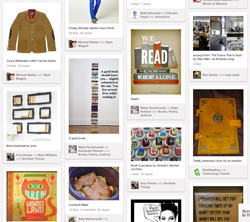 Pinterest is hot, pinned as one of the fastest-growing social networks ever. But the online pinboard has a dark side where people are showing off more than recipes and muscle cars.

Created as a site to “organize and share what you love,” Pinterest has seen exponential growth since its start in March 2010. It’s a virtual scrapbook of images that include foods, crafts, art, health, fitness, and DIY home improvement ideas, all freely shared. In addition, users create their own virtual pinboard of “favorite things” to share with friends and followers.

Pinterest is riding a wave of popularity. Traffic to the site increased by 52% between January and February. Fortune magazine calls Pinterest the fastest growing website of all time. The largest percentage of Pinterest visits are by women, and Internet tracking firm comScore estimates the number of women users at 68%.

However, there’s a growing number of men who are getting in on the fun. Cars and motorcycles, sports, science, and technology are just a few categories that are catching on with the guys. But all too frequently, nestled between an image of a vintage Thunderbird and perfect cupcakes, are images of very scantily clad women (and sometimes men).

Pinterest’s rules of membership prohibit posting nude images, and it has left the site scampering to fix this growing problem. The adult images on Pinterest usually come as a surprise, since most think of the site as just for arts and crafts. For someone who struggles with viewing inappropriate content, this site can pose a very real temptation, in that it can give the illusion that one is “just looking at cool cars” when they are really going to look at bodies.

Meanwhile, several copycat sites have cropped up. Some are nearly identical to Pinterest; however, others feature pornographic content and offer users the ability to “pin” their favorite pornographic images to share with others.

Not only does Pinterest have to deal with getting pornography off its website, but it’s also frequently contending with the issue of harmful body images that are cropping up. More specifically, pro-anorexic pictures feature dangerously thin, malnourished women, wearing little-to-no clothing.

“Thin” is a search term that is turning up these images on Pinterest, bypassing Pinterest’s no-nudity rule.  “Thinspiration” images—thinspo for short—are sending disturbing and dangerous messages about body image to women and girls.

Many of these images may also include text on the photo, which further encourages the viewer towards this risky behavior. An example of this is an image found of a thin woman with tape over her mouth that said I Won’t Eat.

Because of these issues, and from the outcry of the digital community, Pinterest revised its terms of use, which were released on April 6, 2012.

Amy Marlin, a school administrator, recently explained to Covenant Eyes how the content on Pinterest has been a growing issue for them.

“Just like Facebook, Pinterest has become an extremely popular social networking site and it’s providing ‘visual dangers’ to our kids. You can do a simple search for something on Pinterest, and you will end up seeing inappropriate images or text, and we don’t want our students exposed to that.”

What You Can Do: