The following is a book review of Real Sex, by Lauren Winner. The reviewer is Kate Harris, the Director of Cultural Outreach and Special Projects for U.S. Senator Rick Santorum and the Senate Republican Conference.

When Lauren Winner wrote about her conversion from Orthodox Judaism to Christianity in her 2003 memoir, Girl Meets God, her frank recognition of the complexities of new-found faith were unpredictable and charming. As she takes up the question of sex and chastity in her new book, Real Sex, her candor is not only resonant, it is uniquely insightful. In what seems likely to emerge as a critical resource for any Christian seeking to pursue a coherent sexual ethic in a hyper-sexualized culture, Winner effectively redefines the scope of Christian sexual ethics to incorporate realities-as-they-really-are within the church. She emphasizes the profound relevance of Scripture and tradition as a remedy, while articulating a winsome yet bold challenge for the Church to be less modest about its call to chastity.

It’s no surprise to anyone who watches television or shops at a mall that traditional sexual morality is on the decline. According to current statistics, about 65 percent of teenagers have sex before they finish high school and approximately 75 percent of adults have sex before they get married. What may come as a surprise, however, is how steep the decline is—not only within the culture, but also within the Church. In the 1990’s three separate surveys of single Christians showed only one-third of unmarried Christians are virgins. Likewise, of the students and young adults who signed abstinence pledges as part of religious sex-ed programs, 61 percent of students broke their pledge and of the 39 percent who kept it, 55 percent admitted to having oral sex, which they didn’t consider to be sex.

For some, these statistics supply more-than-justifiable grounds to rant about the weakened moral fabric of American culture. But for Winner, these statistics simply identify a growing need within the Church that faith, scripture, discipline and community are sufficient to address; she offers hope in what could otherwise be deemed a hopeless situation.

Central to her evenhanded call is a strong reliance on the truth that our bodies are good (as are our desires when rightly ordered) and that Scripture offers a much more coherent and comprehensive sexual ethic than is typically communicated in classic virginity-centric models of ministry. As she puts it,

“To organize one’s Christian sexual ethics around virginity is to turn sexual purity and sexual sin into a light switch you can flip—one day you’re sexually righteous, and the next day, after illicit loss of your virginity, you’re a sinner.”

This is not to suggest that Winner thinks pre-marital virginity is unimportant. Rather she refuses to indulge the slippery slope, how-far-is-too-far question, pushing the reader to explore and consider the depth and richness of God’s full story of creation, wholeness and redemption. She rejects what German theologian Dietrich Bonhoeffer might call the “cheap grace” approach to sexual ethics and insists on painting a much more brilliant—and challenging—picture of what the chaste life both requires and rewards.

Foundational to each of her assertions is the conviction that our decisions and behavior shape us, especially when it comes to how we use our bodies. As Winner summarizes it,

“The choices we make every day—where we shop, what we do with our bodies, how we pass our time—form us. They shape the type of Christians we become. What we do matters, not because good behavior gets us into heaven, but because behavior, good and bad, creates certain expectations in us, teaches us certain lessons.”

She reiterates this theme throughout the book, and near the end says, “Sexual sin forms us. It teaches us false lessons about what sex is, lessons that are not easily unlearned. But sexual sin is something we can repent of. It is something God forgives.”

Repentance, forgiveness and redemption are critical pieces of this puzzle, Winner argues, not only because they are part of how we learn and grow as Christians, but also because she takes current statistics seriously. She knows she is writing, most likely, to non-virgin Christians—unmarried, non-virgin Christians to be exact. And for anyone who has “fallen off the wagon,” so to speak, and read ad nauseum about the how-tos of Christian purity, her realistic treatment of sexual sin as common and forgivable is probably one of the most profound and refreshing parts of her book. As she acknowledges,

“Sometimes adopting chastity is as simple as reading a book like this one, or attending a lecture, and then making a change in your life. But for many of us, it is the relearning of a basic story. It requires, prayer teaching, work, reformation, even weeping. It requires that we tell each other the story of the gospel, and the narrative of chastity, over and over and over.”

Her willingness to share her own experiences as a (sexual) sinner in need of grace brings an authenticity that is often hard to come by in Christian books about sex. She has wrestled with sexual temptation, engaged in premarital sex prior to meeting her husband, struggled with Church teaching, and bought into deceptions and lies about sex. And yet, she has pursued an affirmative ethic that is big enough to hold all of that sin and confusion and still offer a hope for purity. “As the church,” she says, “we need to ask whether the starting point for a scriptural witness on sex is the isolated quotation of “thou shalt not,” or whether a scriptural ethic of sex begins instead with the totality of the Bible, the narrative of God’s redeeming love and humanity’s attempt to reflect that through our institutions and practices.” Again, she is speaking as one who has walked through the fire and doesn’t take its flames lightly, yet her own sanctification has borne a compassion for those who face the same struggle ahead of them.

Finally, she is wise to supplement her substantive critique of the Church with equally substantive, practical recommendations for how to navigate the realities of sexual sin and the road of redemption. She offers useful tools that provide a tangible way to pursue chastity in real life. She emphasizes developing chastity as a spiritual discipline, recognizing, “it is not only a state—the state of being chaste—but a disciplined, active undertaking that we do as part of the Body [of Christ].” Revealing her candid spirit, she frankly notes the practical aim of this disciplined approach is because “Speaking of spiritual discipline seems to elevate chastity from gritting-my-teeth-and-stonily-avoiding-sex to something lofty, noble and spiritual.” It is self-gratifying in its own way.

Winner also emphasizes the role of the church community in helping to guide unmarried Christians in the challenging call to chastity. Calling for young and old, single and married to come together and “be the church” on this issue is critical: “A community working toward chastity is not captive to euphemism, dissembling, and pretense, but is a place where sin can be spoken of freely, with contrition but without fear.” She talks about setting wise physical limits during dating but does so with a balanced perspective that allows for discernment with the help of community. She also stresses the importance of prayer, repentance, and accountability with other believers. She has great faith the Church is equipped to address the pervasive misunderstandings and deceptions about sexual sin, and she simply wants to see the Church apply it in a foundational, deeply biblical way.

Ultimately, the genius in Real Sex is precisely that it puts forth something real. Sex is a real struggle for single Christians. In scripture and tradition the Church has tools at its disposal that offer real solutions. Winner’s bright and persuasive perspective suggests it is time for all Christians to be sincere and realistic about pursuing chastity as God intends. 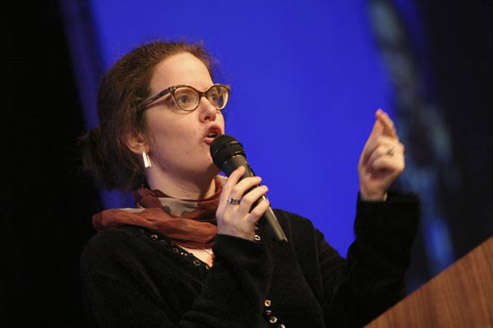 Lauren Winner will be a keynote speaker at this year’s CCEF conference, “Sex Matters.” She will be speaking on “Redeeming Sex for Singles.” Register now.

Read more about Lauren’s other books on her website, LaurenWinner.net.