Brian hopped on his laptop to see if any grad schools had gotten back to him yet. He knew he had just sent out his transcripts an hour before, and he knew that clicking the refresh button on his browser had no scientific ability to generate new emails that had yet to be written. But Brian’s job was really in the doldrums,  and the hope of getting to funnel his pent-up energy toward a master’s degree and a new career field was exciting.

Not from grad schools at least. What did appear after the 5th time hitting the refresh button was the familiar weekly Ally email from Covenant Eyes that Brian received on behalf of his old college roommate Jonathan.

While Brian was sometimes tempted to delete these reports because of their familiarity and Jonathan’s long track record of success, he knew how important it was for Jonathan that he take a few seconds to open and check each one.

It was a good thing he did.

There was no ambiguity about the blurred images that displayed on Jonathan’s report this time. He had been looking at porn—and a lot of it.

Brian knew he could go in one of several directions here. One was to not do anything and avoid what felt like an awkward conversation. But Brian cared too much about Jonathan to do that, so he knew a conversation needed to happen.

This regular habit of checking in did two positive things for Brian and Jonathan’s relationship. It showed Jonathan that Brian was actually paying attention. This gave Jonathan a feeling like Brian was right there with him whenever he was browsing the Internet or thumbing through his phone.

It also set a precedent in their friendship that sexual purity is something that they talk about. Bringing it up wasn’t weird or completely out of the blue. They both knew the importance of the conversation, and Jonathan’s Covenant Eyes reports built an easy on-ramp for that conversation to happen regularly.

The strong history of having these conversations made it feel natural for Brian to pull out his phone and look up Jonathan’s number in order to talk through this recent and severe incident. Before Brian pushed the green call button, he paused to reflect pray. He wanted to make sure he didn’t come across as overly harsh or judgmental to Jonathan.

He reflected on his own past addiction to pornography and remembered the natural sense of shame that always went along with it. Heaping on more shame would only make things worse. He also thought about his own current season of going through the doldrums with his job, and how the COVID-19 quarantine had been exacerbating things.

Lord, help my brother Jonathan right now through whatever he is struggling with. And help me to have the right words to say to him to help encourage and strengthen him. He’s obviously hurting. Help me not to hurt him further. Please give me the words to say to give him hope. Show Jonathan how porn will never satisfy him, and show him practical things he can do instead when he’s feeling low, especially during this quarantine. I need you Lord, because I know I can’t do this on my own and my words need your power behind them. Please help, thank you Lord. Amen.

The Importance of Showing Love and Support

Brian pushed the green call button and waited. After several rings, Brian heard Jonathan’s sheepish voice on the other end of the line.

Brian had decided not to lead with the canned “How are you?” question, knowing most people just respond “good”, without even thinking about it. This would only highlight the elephant in the room and make it harder to get to the reason for his call.

“Hey Jonathan, I just got your Covenant Eyes report from this last week and wanted to call and check in on you. You know I really care about you, and I appreciate you letting me check in with you on this stuff.”

Brian knew that there was no need to bring up the details of what was on the report as Jonathan already knew how graphic these images were, and bringing up the specifics would only heap on the shame. Brian hoped Jonathan wouldn’t shut down, but would see his call as an act of support and love.

Related: How to Be the Best Ally Ever

“Yeah I know bro,” Brian replied. “I know you don’t want this because it’s why you set up Covenant Eyes in the first place and invited me into this conversation with you. That is such an act of courage and I’m proud of you. I know it might not feel like it right now, but you really are on the path of freedom.”

“Ha… I don’t agree with that… or at least I only agree that it definitely doesn’t feel that way right now. Man, this was a really bad one, I don’t know what came over me,” Jonathan said.

Brian could hear the half-smile in Jonathan’s voice, and continued to encourage him: “Dude, for real. You just made it the longest you ever have since this addiction started back in middle school. I know a binge like this might make it feel like all is lost, but that proves that it’s not.  You’ve fallen before and came back stronger than ever, so I know you can do that again.”

“I don’t know man, it’s like I just really wanted it. I knew you’d see what I was looking at, but I didn’t care.”

“How have you been doing with this quarantine? I know I haven’t been doing well,” Brian lobbed, hoping it would help Jonathan go to a deeper part of himself.

“Yeah, I’m not doing so well either. I was doing pretty good at the beginning, but as it’s dragged on, I am getting pretty sick of it.”

Brian furthered the conversation with questions, asking, “What is it you miss most? Or what have the biggest changes been for you?”

“Just not seeing people. And now that I think about it, not doing a lot of the things I enjoy with people, stuff I used to just take for granted and not even think about.”

“Well like my gym is closed for example. I never really thought about how much interaction with people I had there. I used to play basketball there twice a week.”

“With people…” Brian chimed in,

“Yeah, exactly,” Jonathan agreed. “I just thought of it as exercise and basketball, but not the friendships I made there. Or just seeing the same front desk people each time, making small talk, and catching up about the Tigers.”

“Well one good thing about the quarantine is the Tigers can’t lose 100 games this season,” Brian attempted at a joke.

It seemed to land.

“Yeah man, that’s true! But for real, just normal stuff like that I took for granted before—stuff that really was a point of connection for me, both in what I did with my time and as another way to connect with the people I see every day.”

“What are you doing with your time now that so much stuff is closed down?”

“Oh man, you know, lots of video games. Lots of Netflix,” Jonathan said without much enthusiasm. “I’ve never realized how depressing and addictive that stuff is in mass quantities.”

“Yeah for sure,” Jonathan acknowledged. “It was Tuesday morning when that craving really started. Normally it’s not something I would have thought much about, but work has been slow and working at home just gives me way too much time to myself. I was able to fight it off the rest of the day and that night, which was super hard. But then Wednesday came and I just caved. I couldn’t fight it off anymore.”

“It sounds like on a normal week you would have been around a lot more people or been doing some things that brought more life to you. Is that right?”

“Yeah absolutely. I’d have seen my co-workers all day at work and I would’ve had my volleyball league on Tuesday night.” Jonathan seemed to be putting the dots together.

“Well,” said Brian, “it seems like things might not be so random or hopeless after all, what do you think?”

“Yeah I hear you. I think I need to figure out some new habits on how to make sure I’m still spending a lot of time with people, even during this quarantine.”

Brian and Jonathan spent the remainder of their call brainstorming new ways Jonathan could hang out with people to get that positive human connection he was craving. They ended up coming up with three action steps that Jonathan agree to start over the next two weeks before Brian checked in with him again. They were:

They closed in prayer, with Jonathan feeling like he had a fresh start and some practical steps he could take that were really going to help. Brian felt a big sigh of relief, thankful he had the courage to make the call. 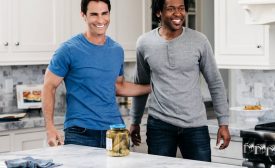