How to Overcome the Flesh - Covenant Eyes

How to Overcome the Flesh

Jon Snyder is the author of the Mighty Man Manual and founder of Mighty Man Ministries. After battling with lust and pornography since childhood and trying everything under the sun to quit, it was a unique encounter with the love of God and its subsequent lessons that began to unravel a lifetime of bondage and bring about true freedom. Jon now sees these same lessons radically set men free world-over.

Most people who are parents, or have had parents, can relate to a scenario like this:

A child is watching, doing or listening to something objectionable, and the parents either catch them or realize the thing or activity isn’t wholesome. What happens? The typical response is usually a strong “Don’t do that! Don’t watch that! Don’t listen to that!” followed with an appropriate punishment.

The child doesn’t learn what to do–they just learn that something is bad. And if they were enjoying it, they’ve most likely just created a shame-based identity formation that says, “I like a bad thing; therefore I’m bad.” In the end, the confusion and shame-based identities actually drive them toward bad behavior, rather than from it. 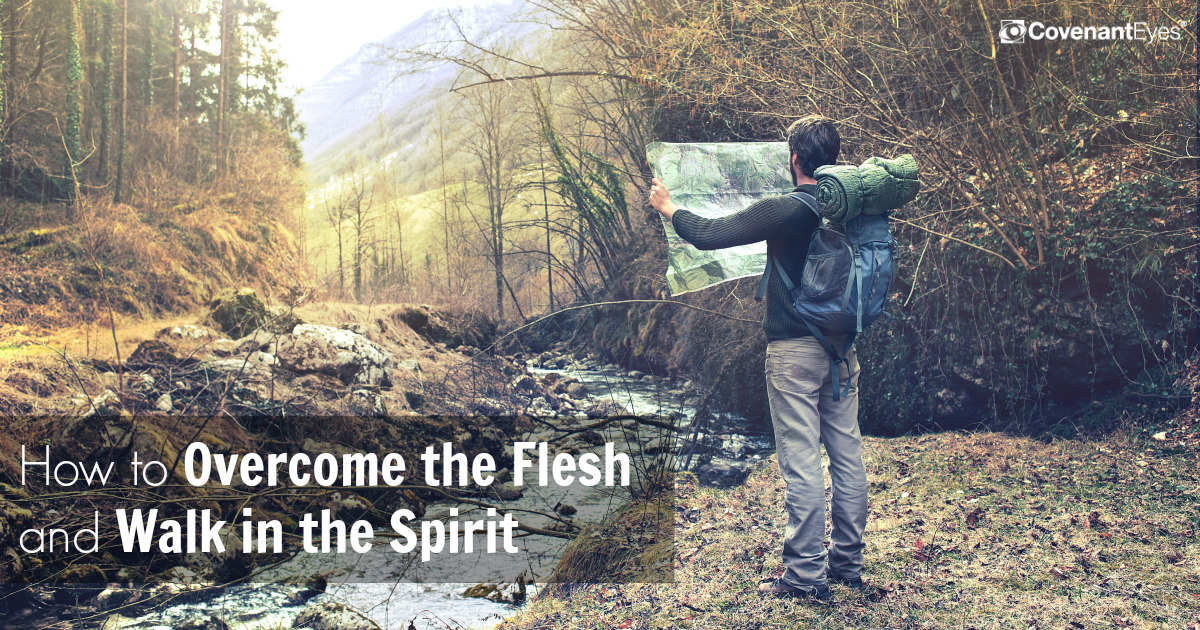 Christians are in a similar conundrum. We all know lust and pornography are bad. We all know what we should do, but how do we get there? How do we actually find freedom?

It is like this: you are lost, and you pull over to ask a local resident for directions, “Excuse me. Can you tell me how to get where I’m going?”

Their terse reply is a matter-of-fact, “Well you sure can’t get there going this way.” And before you utter another word, they scoff and turn away.

“Great, I already knew I was going the wrong way. Now what?”

You spot another local, “Please, I know I’m going the wrong way, but can you tell me how to get where I’m going?”

“Yep. You sure are mixed up. You need to be heading north, and you are going south,” they chuckle and amble on their way.

What happens? Maybe you take a wise course correction and at least start driving in roughly the right direction. But most likely this type of scenario would create confusion and frustration that leave you feeling more lost.

It’s Not About the Nots

I fear we’ve bred a generation of believers whose souls are fixated in the way they shouldn’t go. My personal experience and the experience I have ministering to men is that most Christians are inherently focused on the “nots and don’ts.” We are acutely aware of what we shouldn’t be doing, what we shouldn’t be thinking, how we don’t measure up, what we don’t have, how we fall short, what we haven’t done, what we aren’t doing, etc.

Nevertheless, this dilemma plays out with Christian men trying to navigate the sea of lust that’s out there. Paul writes in Colossians 2:20-23,

Therefore, if you died with Christ from the basic principles of the world, why, as though living in the world, do you subject yourselves to regulations ‘Do not touch, do not taste, do not handle,’ which all concern things which perish with the using-according to the commandments and doctrines of men? These things indeed have an appearance of wisdom in self-imposed religion, false humility, and neglect of the body, but are of no value against the indulgence of the flesh.

Did you get that? The Bible itself says do’s and don’ts can’t help us stop sinning.

When tempted, “Don’t do that! Don’t think that! Don’t watch that! Don’t like that!” All those sound godly, don’t they? What we’ve been taught as “spiritual advice,” the Bible actually calls carnal thinking. Don’t get me wrong, lust is sin; we just can’t beat it the way we’ve been taught. You see, don’ts have no power against the indulgence of the flesh. They tell you what not to do, but don’t tell you what to do or how to think. They tell you not to think like a devil, but don’t teach you how to think like God and see life from His perspective.

How to Overcome the Flesh

The Bible makes it crystal clear how we overcome the flesh. It isn’t with ten steps. It isn’t by trying really hard. It isn’t even by getting super spiritual–but rather by walking in the Spirit.

Walk in the Spirit and you shall not fulfill the lust of the flesh. –Gal. 5:17

The devil has taken this simple answer and made it more complicated and overly-mystical than it needs to be. Most of the instruction out there on walking in the Spirit is either too vague, too weird, or too impractical to do us any real good. Walking in the Spirit isn’t weird or hocus pocus. It is, however, fundamentally different from the do’s and don’ts that most of us have been trained by.

Because we don’t know how to walk in the Spirit and be spiritually minded, the problem is we only know what we know. All our life we’ve been carnally minded, so when we come up against a temptation, we relate to it like we’ve always related. If we try to fight it, we are fighting in a carnally minded way. Walking in the Spirit isn’t for the super spiritual elite who have arrived someplace you haven’t. You have the same Holy Spirit as anyone–and He’s waiting to show you how to think His thoughts and then walk with you through your times of testing.

Walking in the Spirit

All of us have been trained by the world from the minute we drew our first breath. We are born into sin and the carnal mind has created “ruts” or tracks that our mind runs on. When we are exposed to a temptation, our carnal mind knows how we’ve responded to that in the past. We’ve been conformed to the image of the world. So when we come up against temptation again, we are inclined to go down that path again and again, unless, through the Spirit, we are given a new way to think and walk altogether.

Do not be conformed to this world, but be transformed by the renewing of your mind, that you may prove what is that good and acceptable and perfect will of God. –Rom. 12:2

The Bible says we have the mind of Christ (1 Cor. 2:16), and we have been made one with Him (John 17:22). This means exactly what you’d think: we have the right and ability to think the same way Jesus thinks about things. We can start to view people and temptations the same way Jesus would view them if He were walking in our bodies (because He is!).

Renewing your mind is an activity you can initiate at any time with the Holy Spirit who is living in you. Simply take some time to sit with Him and ask Him to give you Jesus’ thoughts about the thing or person tempting you.

Walking in the Spirit doesn’t start when you face temptation. If you wait until then, it is too late. Walking in the Spirit starts now. Even as you read this, sit and ask God to give you new ways of thinking, new ways of seeing, new ways of feeling and watch as God puts His thoughts in you. He gives you new perspectives. He fills you with His love. Then when you are later confronted with temptation, you already know how you are going to think, feel and walk. You’ll have options you never had before. When you face temptation again, you’ll have a different track for your mind to run on.

Our Minds Can Change

Later I was thinking about a person who was a typical trigger, something that sets off the chain reaction in your soul that leads to a fall, for lust. Similarly I allowed God to reshape my thinking about that person. The things that used to trigger lust in me, a scantily clad woman for example, now elicit a totally different response in my heart. Now I see a person who Christ died for, a person who doesn’t know their created value, and doesn’t know they are worth the blood of Christ.

This way of thinking has re-trained my soul to be moved in love rather than inflamed in lust. The same trigger has become a catalyst for the Holy Spirit to be released in me rather than for lust to be resurrected in me. Yes, there is still a temptation to walk in the flesh, but now I’ve got options I never had before. I can walk in the Spirit because the Spirit has shown me how.

You see, if we have the mind of Christ and the Holy Spirit in us, then we have the option to be spiritually minded and to think like Jesus does. God can renew your mind and rewrite what you do and how you think when your triggers go off.

If you’d like more information about any of the truths presented in this article, check out The Mighty Man Manual by Jon Snyder. It’s been a tool to help thousands of men and women find freedom from lust and learn to live in the fullness of all God has for them.