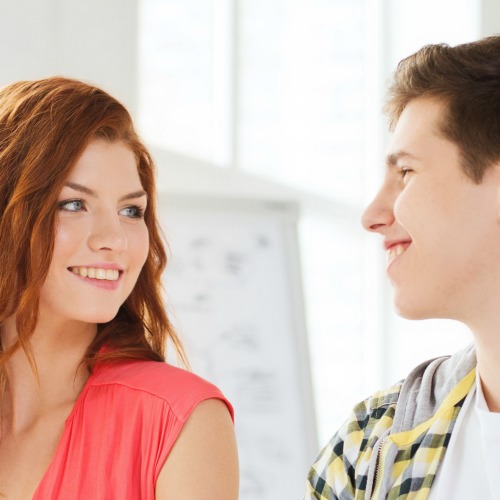 Purity, by its very nature, is the absence of something. It communicates the idea of no mixture, no dirt, no pollutant, no stain, no defect. When we tell our children and teens to aim for sexual purity, we are, in essence, telling them what they need to avoid—sexual and lustful involvement before marriage—not what they should aim for.

Nothing is wrong with the word “purity.” There are multiple words used the New Testament that can be translated “pure” or “clean,” so it ought to be a word in our vocabulary. But it should not be the only word. 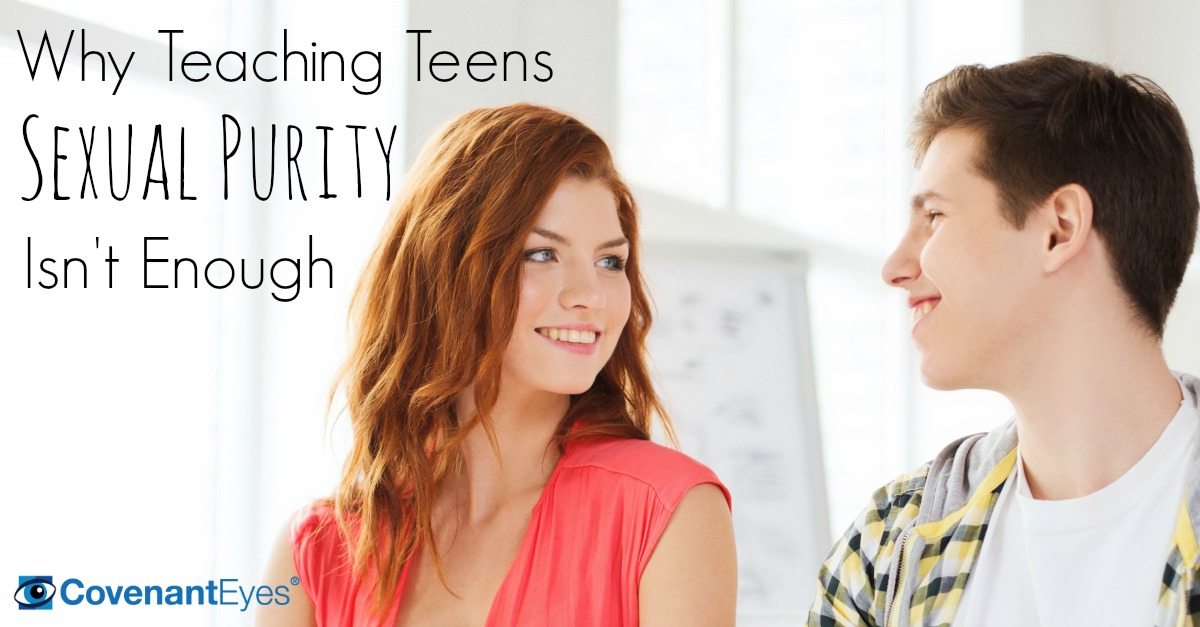 Teaching Our Children How Lust is Displaced

In his book, Father Hunger: Why God Calls Men to Love and Lead Their Families, Douglas Wilson has some penetrating insights into this issue for parents. I quote him in full below:

One of the most vexing questions for fathers bringing up kids in this tawdry world is the matter of entertainment standards and how to protect his family from the rising levels of crassness we see everywhere. But one of the running temptations we encounter in this world is the temptation of coming up with makeshift forms of holiness. We think we know what God wants, and we bustle around to come up with some form of that on our own. But then we discover later, to our dismay, that this is not what He was asking for at all.

Compare these two passages from Ephesians:

Let the thief no longer steal, but rather let him labor, doing honest work with his own hands, do that he may have something to share with anyone in need. (4:28)

But sexual immorality and all impurity or covetousness much not even be named among you, as is proper among saints. Let there be no filthiness nor foolish talk nor crude joking, which are out of place, but instead let there be thanksgiving. (5:3-4)

There is an important word that is found in both of these texts. That is the word rendered as rather or instead (mallon), a word Paul uses in exactly the same way in both texts. In the first instance, his use of it is not really that surprising to us. In the second, there are perhaps quite a few surprises in store. In the first example, Paul says that a thief should stop stealing and that instead of this he should get an honest job, working with his hands. This is because in Paul’s mind there is a basic alternative here—stealing or working. If you work and generate surplus for sharing with those in need, then you have filled up your life with that which will exclude the practice of stealing. We should note in passing that Paul does not tell the thief to get a job so that he can make his own money, and then be in a position to tell hippies to “get a job.” Honest work enables providing for one’s own needs, and for sharing.

But Paul argues in exactly the same way a few verses when he teaches the Ephesians how to get free of crass joking, covetous grasping, the easy naming of fornication and uncleanness, and so forth. The impure life is to be replaced with…now here is where we would say “the pure like as described by Mrs. Grundy,” but Paul says “with thanksgiving.” We contrast impurity with purity, but Paul contrasts impurity with contentment. There is something deep going on here. This is not a trivial point.

Biblical contentment is not stoicism. We are not called to be content in the same way that a block of wood is content—even though we may assume the wood presumably is content. That is not what we are called to. And Paul is not urging us into some kind of “happy, happy, happy all the day” kind of stuff. He is not urging a constant and frothy giddiness. No, he sets the pattern for us, providing us with an example. In one place he describes himself as “sorrowful, yet always rejoicing” (2 Cor. 6:10). His joy, his contentment, was not a perverse kind of denial, or a stiff-upper-lip stoicism. And yet it was “always rejoicing.” This kind of contentment, whether well fed or hungry, is a deep satisfaction with the will of God for you (Phil. 4:11-12). This is bedrock stuff—a basalt kind of joy twenty feet down. And it needs to be a foundation, bedrock joy that runs underneath the entire house.

A few verses later Paul tells us that we must, always and for everything, give thanks in the name of Jesus—”giving thanks always and for everything” (Eph. 5:20). This is part of his sustained argument, where he is continuing to show us the contrast, not between dirty and clean, but between dirty and grateful. This is what helps us to name the problem rightly.

For example, if you are fighting a losing battle for godly entertainment standards in your house, the problem is not teen sex comedies; the problem is discontent. The problem is not dirty jokes, but frustration. If an authority figure says, “You should tell clean jokes instead of dirty jokes,” this is setup for the perfect comeback, “But clean jokes are lame.” But Paul doesn’t tell us to fight dirty jokes with clean jokes, lame or not. He says to fight dirty jokes with contentment and gratitude. And for those who see the world biblically, they see that those whose talk is full of corruption are not revealing a worldly wise sophistication, but rather a seething and unhappy discontent.

Just as the thief is trying to get something the easy way instead of God’s way, so also the person with a foul mouth is trying to get satisfaction in his own way. But outside Jesus Christ, there can be no deep satisfaction—and in Christ, everything is pure. So if we are trying to find satisfaction independently of Him, that move will always veer toward the crass, the filthy, the immoral, the disturbing, and the rest of that fetid swamp. But if makes no sense for someone to live in the swamp of discontent with a resolve to “keep it clean.” Keeping it clean is arbitrary, given the quagmire of discontent he live on, and on top of that, keeping it clean there is impossible.

“Keeping a rule,” however technically correct, falls easily into the trap of abstraction and impersonalism. For the father to “make rules” for a discontent household is simply sweeping water uphill. Adjusting the environment is radically insufficient. Tool many fathers deny the need for the gospel in how they try to protect their children from sin. You cannot adjust the environment in such a way to keep sin out. This would include school, church, books, television, diet, and so on. Christian faithfulness does not come from rearranging the furniture.

As a result, we oppose sin with a false standard of holiness, and then are surprised at its impotence. But gratitude, thanksgiving, contentment, and joy are always personal, by definition. Jesus is there, and if you thank Him, then that gratitude fills up all the available space. This it the “gratitude displacement” strategy. Scripture teaches us that gratitude and thanksgiving are central to a right relationship with God, which in turn is central to a right relationship to the world around us. The fundamental problem with the unregenerate heart and mind is that it will not honor God as God, and will not give Him thanks (Rom. 1:21). Contrary to this, we want to make sure we do both. Confronting sin, we should approach it with gratitude displacement.

The opposite of lust is not purity. It is contentment and joy.

Wilson here prescribes the biblical solution to a restless drive toward lust: contentment, gratitude, and joy.

The million-dollar question is this: how do we teach our children this kind of contentment?

1. First and fundamentally, we have to acknowledge to our kids that contentment is only truly found in Christ. Yes, our household media rules are important. Yes, our standards for dating and/or courtship are important as well. But each rule must be met with a heartfelt acknowledgement:

“God’s law tells us not to make opportunities for lust in our life, but when we do this, we will find that our hearts are still restless. This is because God’s law doesn’t just tell us how to live. It reveals something is wrong inside us, that at our core we desire the very things that are bad for us, that we need God to change us on the inside. That’s one way Jesus saves us from our sins: he break’s sin grip on our hearts and gives us new, godly desires.”

2. Second, they need to learn to live with less. Paul writes, “But godliness with contentment is great gain, for we brought nothing into the world, and we cannot take anything out of the world. But if we have food and clothing, with these we will be content” (1 Timothy 6:6-8). One of the best ways to train ourselves for contentment is to start giving generously to others so we aren’t so ensnared by the desire for more—a desire that is the very root of lust.

3. Third, we should tell our kids that contentment is learned through God’s training. One often-quoted but perplexing passage is found in Philippians 4:11b-13:

“…I have learned in whatever situation I am to be content. I know how to be brought low, and I know how to abound. In any and every circumstance, I have learned the secret of facing plenty and hunger, abundance and need. I can do all things through him who strengthens me.”

Paul says twice that he  “learned” contentment. First he says that he learned the importance of being content—that it is something he should be. Second he says he learned how to be content. He says, “I have learned the secret.” What secret?

The word Paul uses here is a technical word that was used in other religions of his day; it carries the idea of being “initiated” into a special group to learn exclusive mysteries that only an inner circle was allowed to know. However, here Paul implies all Christians can learn the secret of contentment, and he tells them what his initiation process looked like.

Christ had brought him through experiences of hunger and distress, as well as circumstances of plenty and fullness. One moment Paul is surrounded by encouraging friends, has a roof over his head, and is experiencing great success in ministry. Then next moment he is being stoned, shipwrecked, or thrown in prison. Both kinds of experiences—plenty and hunger—were the way Christ initiated Paul in the school of contentment. Ever valley was another opportunity to trust God, and every mountaintop was an opportunity for gratitude.

If our kids are going to learn contentment, it begins by help them see the world through the lens of Christ’s sovereign control and care, by seeing the ups and downs of their life not as a chaotic roller coaster, but as the purposeful training hand of God.

Once they learn this secret, they will find in themselves the divine strength to stand against lust.