As a teenager in the ’90s, one of the coolest gifts I ever received was a Game Boy Pocket. I spent countless hours staring at the 2″ black and white screen, staring intently at Tetris and Donkey Kong Land 2. And I brought it everywhere I could: vacations, grandparents’ houses, piano competitions. 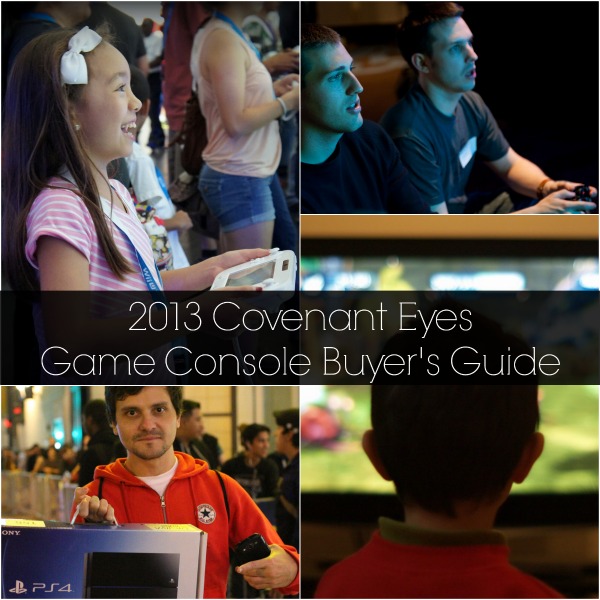 Technology was much simpler in that golden era of dial-up Internet. Hand-held devices were generally one-use. For gaming, you had the Game Boy series. For communications, the Palm series was the pinnacle, with its ability to make phone calls and send e-mail.

As much as we as adults can smirk at these outdated anecdotes, it’s easy to forget just how different the world is for our children. Today, Internet-enabled devices not only bring astounding benefits, but they also exponentially increase the access points to inappropriate content.

Case in point: many kids own an iPod touch®, with which they can easily open Safari, and with a simple misspelling, open thousands of pornographic videos and images. And they take that device with them on vacation, to their grandparents’ houses, to piano competitions…everywhere they go.

So what about this season’s hottest devices? What are the risks, and how can we protect ourselves and our families on them?

Below you will learn about…

In the last year, all three major gaming platform creators—Nintendo, Sony, and Microsoft—released new versions of their consoles. In many ways, they are mere evolutions of the previous generation of consoles. For example, graphics have improved on all three consoles. All three include cameras to enhance the entertainment experience (more on that in a moment). And, perhaps more importantly, all three seek to be all-in-one media centers for your family.

The Xbox One is the most transparent about this goal. There’s the ubiquitous Internet access, of course, but you can also plug your cable box directly into your Xbox One, meaning you no longer have to switch inputs to go from games to TV and so forth. For Xbox Live Gold members, it even seeks to replace the (dying) home phone market via a custom version of Skype for easy video calls. You can even install the Xbox SmartGlass app on your phone or tablet to “extend, enhance, and control what’s playing on your Xbox One,” as Microsoft says.

More interestingly, the device is set up for split-screen control. This means, on a single screen, you could, say, cheer Michigan State on to victory in the Rose Bowl while mocking your Stanford-fan friends through Skype. Or, as one commentator put it,* “I didn’t know I wanted to watch League of Legends matches while I played Forza, but now I know that this is a thing that I actually desire.” One Microsoft engineer even stated that you could plug your other consoles into the Xbox One and control them through Microsoft’s platform.* The Xbox 360 is the obvious example, but his insinuation was that you could use it to control the PS4 and Wii U while still taking advantage of the Xbox One’s multi-tasking capabilities.

The Wii U similarly seeks to be the center of your home entertainment setup. Its biggest innovation is the GamePad, a game controller with a built-in camera and a touch-screen interface. It is a cross, in many ways, between an iPod touch and Nintendo’s handheld consoles, such as the Nintendo DS. Most pertinent, it offers an easy, out-of-the-box experience for typing commands or browsing the web, which is no small feat, as anyone who has ever tried to type commands using a D-Pad will attest.

By contrast, the PS4 has marketed itself as a device for gamers. It still features standard streaming capabilities such as Netflix, Amazon Instant Video, and Hulu Plus, of course, but as a rule it is focused on the gaming experience. Contrast the PlayStation app to the WiiU GamePad: while the latter is about giving you a second screen, the former is simply about improving your access to your games and the friends who also use it. It’s easier to check and respond to in-game messages via phone than a game controller, and it also empowers you to download a game while at work and have it ready for you when you arrive at home.

The PS4’s biggest innovation is its integrated game streaming feature. The controller now includes a “Share” button, allowing both sharing a few minutes of recorded gameplay—or live-broadcasting—via the streaming services UStream and Twitch. With the camera installed, this may even include your face…or more. And, just as importantly, viewers can respond to your actions on-screen.

The Problems with Cameras, Live-Stream, and Playroom

Unfortunately, it didn’t take long before gamers started very visibly abusing this streaming capability. Using the camera, The Playroom (pre-installed on the PS4) shows you in your living room (or basement, or bedroom), interacting live on-screen with virtual robots. It’s an adorable idea…until you add live-streaming to the mix. If you’ve followed this blog for any amount of time, what happened next is no surprise: live-streamers started streaming inappropriate content, and stream viewers started responding inappropriately. In one case, a Playroom user exposed his napping wife’s breasts on-camera, eventually stripping her naked. In another, a viewer told a young child that he was outside his window, causing the child to panic. After only two weeks, game-focused streaming site Twitch banned streams from The Playroom completely.

So far, the PS4 has been the only console to report major abuses like this. It is not, however, the only device with a camera and the potential for abuse. The Wii U’s GamePad has a built-in camera. The Xbox One has the Kinect. Technically, all can be disabled (though in the case of the Wii U, disabling it permanently may mean never using the GamePad). But like any device with a camera, they are open to abuse.

In short: It’s the usual set of problems on a new set of devices. The cameras on all three devices were designed to enhance the device’s experience, whether through streaming or motion control or video calls, but like any camera, it is subject to abuse.  Now reread that sentence and replace the word “camera” with “social networking features.” Now replace it with “Internet access.”

Is a device Internet-enabled? Does it have voice commands? Private browsing? Come with a camera pre-installed? Then there is a risk of harmful content and harmful interactions.

Protection is a Must: Using Safety Features

Whatever devices you may plan to give away this Christmas, it is absolutely critical that you are able to protect it in some sense. If you use Covenant Eyes and our software is available for the device, then the first thing to do is install it on that device (see a breakdown of our availability below).

If Covenant Eyes is not available for it, then you need to do research on the device’s potential security issues and built-in safety features before you buy it. This means reading up on the parental control options for the Xbox One, the Wii U, and the PS4.

It also means double-checking that mp3 player you bought your 9-year-old to make sure it isn’t Internet-enabled. It even means researching toys designed for kids, like the Fisher-Price Easy Link Internet Launch Pad and ToyMail. It’s time-consuming, certainly, but the safety of yourself and your family is worth it.

If you use Internet Accountability or Filtering, you can install Covenant Eyes on as many devices as you own at no extra charge.

If you’re looking for compatibility information on Windows 8 PCs, our Beta version of the software is available and in the final stages of testing, which also includes updates for improved Accountability Reports. A standard version should be released in early January.

(Get installation instructions for Windows here.)

Mac computers – Covenant Eyes offers Accountability and Filtering for Mac computers. In January, Filtering on Mac will include time-of-day blocking, so that you can shut down Internet access at night, for instance.

(Get installation instructions for Macs here.)

iPhone®, iPod touch®, and iPad® – Covenant Eyes monitors top-level domains across all apps, and forces safe search through Google and Chrome across all apps as well. For the best Accountability experience, use our built-in browser.

(Get installation instructions for iPhone, iPod touch, and iPad here.)

Android™ phones and tablets – The Covenant Eyes Android app works on Android phones and tablets, including the Kindle Fire and Kindle Fire HD. It monitors the stock browser, as well as the Skyfire browser. It also lists the other apps that were accessed on the device—so if the Accountability user has accessed an unmonitored browser, you will see that they accessed it and can ask why they used that browser instead of a monitored one. (Update for April 2014: The Android app also has the ability to lock down other apps on the device.)

By the way, on the Samsung Galaxy S4, Google Chrome is the stock browser and is monitored by Covenant Eyes, while the browser simply labeled “Internet” is not monitored.

(Get installation instructions for Android here.)

What about the devices Covenant Eyes doesn’t monitor? Unfortunately, at the moment, there are many (including all three gaming consoles) that have not been prioritized due to low market share or other technical reasons. Sometimes this even includes devices that run on very similar operating systems to Covenant Eyes-supported devices. Here are some major exceptions:

Again, it’s important to look at any gadget you buy this Christmas to see if it is Internet-enabled, and if it has parental controls that you can use to protect your family. Make sure you look at supposed single-use devices in particular; even the first-generation e-readers often had Internet capabilities.

*Note: The articles referenced were published on a gaming website that has since been shut down.