Stronghold: An Allegory of Fighting the Battle for Purity

Stronghold: An Allegory of Fighting the Battle for Purity 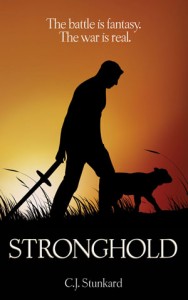 Like many American men, C.J. Stunkard was exposed to pornography at a young age, and his struggle with lust in our sex-saturated culture played a dark role in his formative years. Throughout his teens and into adulthood, he lived a typical Christian life but carried an all-too-common secret struggle.

By God’s grace, C.J. has broken free of the strong grip of pornography, but the temptation still exists and must be fought. His first book, Stronghold, is a fictional retelling of one such battle, and it gives readers a glimpse into the hurt, the faith, and the warrior ethos of those who contend with this issue in their lives.

I had a chance to ask C.J. about his book and why he wrote it.

1. There are a lot of books out there about lust. What prompted you to write this one?

It’s a long story, so I will give you a Cliff-Notes version. In 2011, I felt the Lord leading me to write a novel, though I did not know what story I would tell. So I did what writers do: I read, planned, and wrote notes—lots of notes. I created characters, constructed a narrative, and began a first draft.

Then the worst thing happened (and it can happen to any writer). I got about 80 pages into the novel, and I hated it—well, not “hated,” but I had no interest in it. I had no desire to go back and re-read and revise and improve (and these are the necessary steps of good writing). So, I abandoned the initial project, but I still felt led to write a novel.

Months passed without a story, and one night, while I was alone in my apartment, Christ delivered me from a strong temptation. When the evening began, I was certain I would fall into old habits and sins, but by the late hours, I had been brought through temptation. Through this experience, I was also given a story worth telling.

While my journey during that process was different than The Believer’s in Stronghold, it laid the groundwork for the narrative, and once I shared my experience with several trusted persons who encouraged my using it as a tool to encourage others, I went to task in order to fulfill what I felt led to accomplish.

2. The book is written as a dramatic story. Why do you think this approach will be helpful to people battling lust?

Well, I think humans are created to process stories differently than instructional material, as useful as the latter is in most instances. I heard countless sermons as a child, but I cannot recall more than a handful; however, I could tell you of numerous good lessons learned through a litany of films or cartoons I digested after school.

Frankly, no anti-drug awareness campaign was more engaging and digestible to me as a boy than Saved by the Bell’s or G.I. Joe’s take on the matter. My point is narrative can strike us at a different place than direct information, and I feel that fiction like Stronghold—stories that viscerally explore our relationship to Christ and our lingering sins—may speak to our experiences and inform those ongoing experiences.

Some of my readers have expressed that Stronghold contextualizes issues in a way that is poignant and memorable, in that it takes feelings that they had about their struggles but could not understand or communicate. To some degree, they now have a picture of their inner turmoil and that enhanced understanding is always helpful in developing resolutions.

3. There’s a lot of thought put into the meanings of character’s names in this book. What do you want the reader to get out of this?

As a writer, I am always trying to find the best tools to enhance my story, accomplish narrative aims, and create a more vivid experience for the reader. The use of specific and meaningful names helps achieve all of these goals. Names add depth and layers to narrative. They have power, both in meaning and sound.

As the soul of a person is complex, deep, and full, so too must be the fictional world that represents it. I wanted the names to suggest something in their very nature, as if they hinted at some other, hidden meaning. My hope is that they deepen the total reading experience and create a better sense of texture for the world of the story while also expressing layered, intentional meaning intended throughout the text.

4. There is something Bunyan-ish about your book. Were there any pieces of literature that inspired this kind of writing?

Wow, I could create a summer reading list to answer that, and frankly, all the books I’d mention are better than mine. Two literary influences of a classical style would be Lewis’ Chronicles of Narnia and Tolkien’s Lord of the Rings.

Bunyan is there, to be certain, but I didn’t actually read Pilgrim’s Progress in full until after I had completed my first draft. In fairness, I would say that I may have always had the concept of Pilgrim’s Progress in the back of my mind because it is such a part of our Christian literary heritage, and I engaged bits and pieces of it in elementary school. The other two authors, however, directly influenced not only moments but also overall tone and language in Stronghold. I know it may sound silly, but in some ways my composition was dictated by their approval. From time to time, I would wonder to myself, “What would they think of this sentence or that word choice?”

The biggest contemporary influence was Suzanne Collins’ The Hunger Games Trilogy. That series was a game changer for me because I read it in a week, and it showed me the power of dictating speed in prose through structure. The use of the first-person perspective created a story that is both as inherently complex as the human mind and as also full of discovery as the human experience. I tried to create a similar journey with Stronghold (though my success in doing so is debatable).

All of the above speak more to technical matters of story execution, but I could also mention nonfiction works like John Piper’s Desiring God, Francis Chan’s Crazy Love, and Tim Keller’s The Reason for God as influences on my way of thinking and communicating about my love for Christ and the depth of the Christian’s struggles in sanctification. All three of these pastors, in addition to others, helped inform my faith as well as my attitude toward proclaiming Christ with unabashed and unapologetic boldness coupled with raw, personal vulnerability. So, there’s a list of major influences, and again, all of those books are stronger than mine.