Sherry Allchin has been in some form of ministry for nearly fifty years, first as the wife of a youth pastor, then as a mother of three and a Christian school teacher. She now lives in Charleston, SC working at the Low Country Biblical Counseling Center. She completed her M.A. in Biblical Counseling and has been counseling individuals and families for over twenty years. Their adult children and seven grandchildren serve the Lord across the country. Sherry is a member of the Association of Certified Biblical Counselors. Her passion is helping others to grow in their faith and to make life count for eternity!

“In the last days perilous times will come: For men will be lovers of themselves…” (2 Timothy 3:1-5, NKJV). Pornography is readily available everywhere from billboards to sex flicks to websites and chat-rooms, and as easy as “sexting” pictures of oneself and others. The format matters little. The results are the same: devastation. Because it’s easily accessible in secret, it can be a very private sin, but the result is a very large explosion! 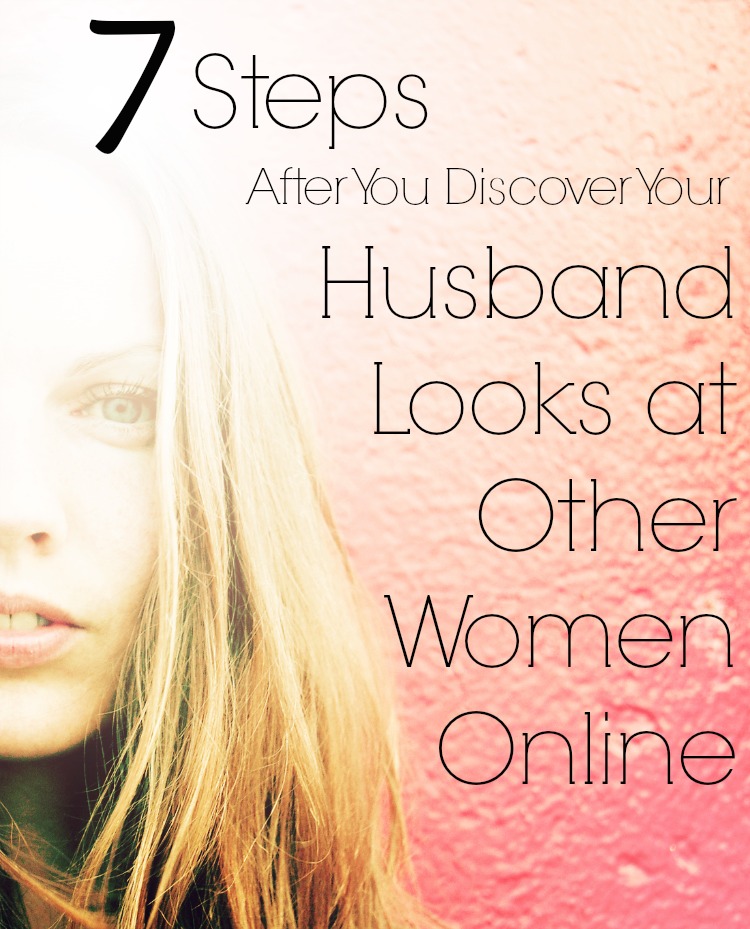 The secrecy surely magnifies the betrayal, anger, and horror a wife feels when she discovers her husband looks at other women online. She may have known it was a past problem and believed he lived in victory, or she may have been clueless to his addiction and feels duped by him. Still, she knows it is not “normal” and feels violated, exposed in shame that the man she trusted has taken what was sacred between them and viewed other women and other acts in violation to their sacred covenant of marriage. It is among the worst betrayals!

So what is a Christian wife to do when she discovers her husband is into pornography?

1. Listen objectively before passing judgment or reacting in anger or disappointment. Don’t jump to conclusions. Listen with discernment to be sure you have the facts. Is his story consistent with what you know? Listen carefully (Proverbs 18:13).

2. The discussion begins privately between the two of you (Matthew 18:15). Try to understand his depth of involvement, but it is rare to get the whole story the first time. God didn’t get it straight from Adam and Eve, and your husband isn’t likely to respond much better without help. But a good discussion is two-way, so ask him to listen to how you are feeling and how his sin affects your marriage and also his relationship with the Lord. Appeal to him to get help. If he refuses and you are convinced you have the facts, Matthew 18:16-17 says to involve help. Be discerning about whom you choose to involve, and keep the circle small. Don’t run to others who are not a part of the problem or a part of the solution. That includes other family members. Gossip is destructive, even if it is true.

3. Is his heart attitude toward his sin one of repentance or excuses and justification? Anger indicates lack of repentance. Worldly sorrow feels bad that he got caught. Godly sorrow produces the fruit of repentance, which is to change. Pray that he will come to a place of true godly sorrow (2 Corinthians 7:10). But what if he doesn’t want help? Neither did the Prodigal Son initially. Keep praying and trusting God, and get help for yourself! It is easy to focus on his sin, but you must choose to focus on your faithful Lord instead, and on your own growth through this difficult trial (James 1:2-4). Your husband’s desire for pornography is not about you—though every wife I’ve counseled initially believed she should have been enough for him and that it is somehow her fault. It is not! He chose to sin.

4. He will need people who can listen with compassion and humility, and who know we all are candidates to sin (Galatians 6:1-5). God has given you permission to involve those who can help! The truth will come easier when a pastor, counselor, or friend listens and then guides him into accountability in love, not in shame or anger, because love unifies and encourages (James 1:19-20). The goal is restoration.

5. The depth of involvement that comes out of these discussions will determine the kind of help you need. Will a men’s accountability group and installing Covenant Eyes be enough? Perhaps for some men, yes. Godly sorrow produces change! For others, a more intense individual counseling with a godly man who can unpack perhaps years of wrong thinking and help him develop a lifestyle of self-control in the seven building blocks for moral purity.

Wives do not make good counselors or accountability partners for their husbands, but function best in the God-given roles to support, encourage, and pray for their husband’s growth in sanctification. In fact, you as the wife will need your own counselor and encouragement as you go through this trial with your husband! Choose a counselor that will keep you pointed vertically and that will use Scripture to teach, comfort, and guide you through this difficult time in your marriage. As each of you focus on your own growth and sanctification, in time you will unify into that three-fold cord that is not easily broken (Ecclesiastes 4:12).

6. Model the grace and mercy that God the Father so graciously bestows on each of us when we sin and repent. Forgiveness comes with true repentance and change; it is choosing to model after the way God forgives us. Rebuilding trust is the process that takes more time, observing his accountability, faithfulness, and consistency. But trust first begins vertically: trusting God even when you fear a future fraught with anxiety, with or without him. Going vertical strengthens you to face your anxieties and disappointments, and to choose forgiveness when there are no guarantees.

7. Work on your communication and relationship as a couple. After he is growing in his vertical relationship with the Lord, it is time to evaluate the horizontal in every sphere. When a crisis in a marriage becomes a stepping stone to greater growth and intimacy, it strengthens the relationship and builds a platform for ministry to other couples in crisis.