I have seen the face of human trafficking.

While filming Nefarious: Merchant of Souls–a documentary on the global sex trade–I traveled to a small village on the outskirts of Phnom Penh, Cambodia. I had heard that the village was a hotspot for child sex tourism, but I wasn’t sure what to expect when I arrived.

When the dust around my vehicle settled after the long trip down the bumpy dirt road, I saw a white western man standing in front of a dilapidated shack. The man, probably in his late 40s, was bartering for sex with a child outside of a shanty brothel.

My film crew and I quickly jumped out of our vehicle and began to approach the man. When he saw us, he took off down the dirt street towards the main highway and we gave chase, catching up to him just as he saddled the back of a moped taxi. I grabbed him by his shirt and stared straight into his eyes. The look on his face was one of sheer cowardice and it seemed that there was a literal film of perversion that glossed over his eyes. After I raised my voice, demanding that he never return to the village again, I let him go.

As we walked back to our vehicle, I pondered what I just faced. Why was this happening? Who was this man? Why was the most lucrative business in this village child sex tourism?

Then it hit me–this man didn’t wake up the day before and decide to fly to the other side of the world to buy a child for sex.

However, over the past year or two, there has been an explosion of awareness concerning the issue of human trafficking. Almost everywhere I turn I am hearing something about it. But what is striking to me is that modern trafficking has been a significant problem for the better part of the past 30 years, yet it is only gaining widespread awareness now. I don’t think there is any explanation for this other than that God is simply highlighting this injustice in a pronounced way. I really believe that God is orchestrating a global awareness movement to draw people’s attention to this issue. And one of the main reasons is so that we begin to ask the question, “Why is this happening?”

When first considering human trafficking, it may not seem like the issue has anything to do with you or me. To us, human trafficking seems like a troubling issue that poor souls somewhere out there–somewhere far from here–are suffering from.

However, when we begin to ask the question “why?” when we consider human trafficking, we must look at our culture. What kind of culture is producing so many men who are eager to buy women and children for sex, contributing to a $32 billion per year human trafficking industry? I believe the answer is the kind of culture that produces and perpetuates a $100 billion per year pornography industry.

Of all the men we talked with who had purchased a woman or child for sex in prostitution, there wasn’t one who didn’t have a history of viewing pornography. The deviant behavior of men in our world is not simply pathological; it has been taught to them. The hyper-sexualization of this generation has awakened an unprecedented demand for illicit sex. When men pay to view sex, they aren’t too far from taking the step to buy sex.

Boys growing up in this culture form an objectified view of females at an early age. Ninety percent of them will view pornography between the ages of 8-16, with the average age of initial exposure being 11. When a young child’s fragile mind is exposed to the graphic images in pornography, it distorts his view of girls, sex, and relationships. He begins to see them as inanimate objects, devoid of humanity–a thing to be conquered instead of a person to love.

After returning to the states, I e-mailed our contact in Cambodia to see if he could send me any “relics” from sex slavery in Cambodia for a human trafficking museum I was opening in Missouri. The next week he e-mailed me back and told me about some pajamas that he recently recovered in a brothel raid. They belonged to a 7-year-old girl in the village where he was based. The only problem, he explained, was that they were still stained with her blood from sexual abuse.

When most men first start looking at pornography, they often fail to consider the consequences of their actions. But the other end of pornography is the blood-stained pajamas of 7-year-old girls. And that is the face of human trafficking. 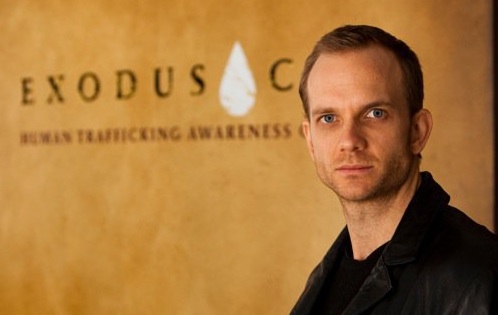 Benjamin Nolot is the Founder and President of Exodus Cry and Producer/Writer/Director of the Nefarious documentary trilogy. Exodus Cry is an international anti-trafficking organization committed to abolishing modern-day slavery and assisting the victims of human trafficking through rescue, rehabilitation, and reintegration into society. Nefarious is a series of three documentaries that expose the undercurrent of injustice beneath the global sex trade. Benjamin resides in Kansas City with his wife Lauren and their son Judah and daughter Jovienne.