5 Tips to Accountability on Smartphones 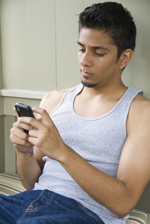 Until recently, there was an app called “Girls Around Me” that consolidated public data from Facebook and Foursquare and listed the females (or males) nearby. It was legal, if creepy, and it was the perfect tool for so-called pickup artists: “Hey, do you remember me from [listed high school or workplace]?” “Yeah, this song is okay, but it’s not my favorite type of music. I’d much rather listen to [girl’s favorite band].”

As Internet-enabled devices, smartphones and tablets come with unique risks and temptations. They also bring specific hurdles to accountability relationships. An app like “Girls Around Me” should bring special concern for an Accountability Partner who is holding a son or friend accountable.

Keeping apps secret is the equivalent of keeping the Internet secret.

The Facts About Smartphones

Teens and young adults in particular use smartphones, and are therefore at a higher risk of Internet misuse on their mobile devices. One study found that 51% of 18-34-year-olds own smartphones. Meanwhile, 49% of teens use the Internet on a mobile device.

These stats reflect a growing shift in attitudes toward computers, phones, and Internet use. In short, many people find that their smartphone is enough, and that computers are no longer necessary. “I know people who got their Android phone and they just don’t use their computer anymore,” said Tom Schultz, a software developer at Covenant Eyes. “They just don’t care because you can do all your web surfing, all your applications, your YouTube, everything right on the phone.”

As such, it’s absolutely critical to discuss smartphone use as part of conversations about Internet use and accountability. Here are five tips to consider about smartphone use.

Currently Covenant Eyes offers a web browser which monitors Internet use for iPhone®, iPod touch®, and iPad®. The app for Android™ smartphones and devices monitors web browsing on the device’s stock browser, as well as reporting which apps were used and how long they were accessed. (Update for April 2014: The Android app now has the ability to lock down other apps on the device.)

Covenant Eyes user Dwayne Moore recently explained why he installed the Android app on his smartphone: “My phone’s got a big screen and fast Internet access. That’s an invitation for temptation. Knowing someone else can see what sites I’ve browsed really helps keep me in check.”

He added, “Just the other day I got a Twitter message from a girl named ‘Artie.’ Artie’s avatar was a picture of her legs crossed in a mini-skirt. I was tempted to click the enticing link she sent me, but then I remembered the covenant I’ve made with my eyes ‘not to look lustfully at a girl’ (Job 31:1). And I also remembered that Covenant Eyes was on my phone, so I deleted Artie’s message really fast!”

2. Talk About App Use

One of the biggest benefits to smartphones is the ready availability of apps. In fact, 29% of adult cellphone users use apps. Many of these are harmless or even helpful; it’s doubtful that the app for the budgeting site Mint.com will be used inappropriately.

Similarly, many popular game apps such as Angry Birds are more likely to be risks in terms of time misuse than access to inappropriate content. Schultz explained, “You could see, ‘Oh, Tom has played [an air hockey app] for six hours today,’ which probably means he’s not outside, he’s not reading a book, or talking to people, so you probably want to call him up and say, ‘Maybe you should put the air hockey down.'” When the theme or content is a problem, it will frequently be obvious from the title.

In some ways, innocent sounding web-accessing apps are the biggest danger. Popular apps like Twitter, Facebook, and YouTube offer unmonitored (yet limited) Internet access. Since social networking can contribute to divorce, and since many YouTube videos are inappropriate, it is important to discuss these apps as part of  conversations about Internet use.

Granted, it’s easier to discuss app use on Android devices, since they are reported through Covenant Eyes. If someone has accessed an app called “Roll a Joint,” for example, the problems are fairly intuitive. Those who receive reports for someone who owns a non-Android smartphone need to be diligent about asking about app use. Those who receive reports for a teen or someone who is struggling with app misuse may want to lock down their phones so they can only download apps that have been specifically approved.

3. Remove Apps for Sites that Can Be Accessed Via a Browser

Some websites have created apps simply to provide a better experience than the browser. Twitter, Facebook, and YouTube all work on the Covenant Eyes iPhone browser, for example, but have dedicated (free) apps. While it is often easier to navigate these sites via their apps, it may be appropriate to lock down or delete them. The Accountability user should access such sites via a monitored browser. Apps with built-in browsers should also be an area of concern.

4. Lock Down Apps As Necessary

Since Covenant Eyes for iPhone does not monitor apps used due to limitations in the operating system, it may be helpful or even necessary to lock them down such that no apps can be downloaded without permission. (Learn how to set restrictions on the iPhone in our user guide.)

(Update for 2017: We just released our brand new, completely overhauled Covenant Eyes Accountability app for iPhone® and iPad®. Our patent-pending technology extends accountability coverage to top-level domains accessed on all apps on the iPhone and iPad in ways that no one else can. Learn more about the new app.)

Scott McClurg, Client Relations Manager at Covenant Eyes, has his apps locked down on his iPhone; he can only purchase them if his wife unlocks them for him. “This way she doesn’t need to worry about what I’m doing on my phone,” he said. “It’s a good preventative measure.”

In addition to monitoring through Covenant Eyes, kids or young teens should be watched closely. Dan Lohrmann, Chief Technology Officer for the State of Michigan, recommends allowing kids to share a mobile device (in his case, an iPad) among the entire family, rather than allowing each child to have his or her own smartphone. In his own family, he has found that, in addition to giving him and his wife control over app use, sharing the device has provided additional benefits. For one, it promotes sharing. He explained, “We use the single device as an opportunity for them to learn how to take turns and appreciate what valuable time they are given on the device.” In addition, his kids use it for educational games. “Our kids are getting smarter thanks to the energy and ‘buzz’ created by having the opportunity to use [my wife’s] iPad,” he said.