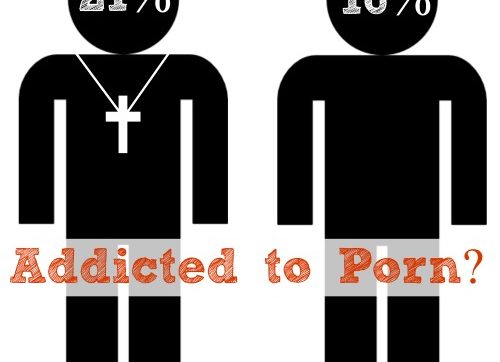 Clearly, what is considered “regular” use of pornography, or being “controlled” by it, are not the same across the board.

So what makes someone feel “out of control”? One contributing factor that psychologists give is religion. Pioneering sex therapist Michael Quadland has studied those who feel “out of control” with their sexual behavior. He found the patient’s and therapist’s beliefs about what is sexually “normal” the biggest controlling factor in whether the behavior is deemed compulsive or destructive.

The Diagnostic and Statistical Manual of Mental Disorders doesn’t use the word “addiction” for anything—not drugs, alcohol, nor any behavior. The language of addiction is largely shaped by culture—not medicine. Christian counselor Ed Welch explains:

“In popular use, addiction has become a very elastic and ambiguous category that contains everything from the frivolous (added to the six o’clock news) to the grave (addicted to alcohol). It also includes the unequally yoked categories of disease and sin. Given its ambiguities, there is a growing sentiment that we need a different word” (Addictions: A Banquet in the Grave, p.11).

On top of these cultural ambiguities, addiction language in Christian community is also shaped by sin language. A year ago I heard Ed Welch give a talk at a conference in Philadelphia entitled, “Addiction, Temptation, & Voluntary Slavery.” He spoke about how so often the “Big Book” used by AA members seems so much more alive to them than the words of the Bible. Why? One reason is the Big Book uses “addiction” language. The Bible does not.

The recovering alcoholic needs to understand the language of the Bible. The Bible doesn’t talk of “addiction,” but rather “slavery to sin.” The Bible doesn’t speak of the root of habitual sin as merely a “disease,” but as “idolatry.” Once these categories are understood, many portions of Scripture can and do come to life for the struggling addict.

Biblical language levels the playing field between the so-called addict and the non-addict. The Bible speaks of a slavery to sin that has affected the whole human race. For the addict, this slavery has impacted his or her life in a particular, more demonstrative way; in fact, the conference in Philadelphia was called “The Addict in Us All,” to highlight this very point: we are all addicted to self, addicted to sin, and as Christians we are all being redeemed from that life of sin-slavery.

Definitional differences aside, could it be that Christians actually have a more difficult time battling addictions? I am not aware of any studies or surveys that suggest this, but there are at least two “theological” factors at work in Christian communities that might serve to escalate addiction:

Being raised in Christian community, I know that teaching a high moral standard didn’t make me want to sin less: rather, I wanted to sin more. The apostle Paul wrote, “[I]f it had not been for the law, I would not have known sin. For I would not have known what it is to covet if the law had not said, ‘You shall not covet.’ But sin, seizing an opportunity through the commandment, produced in me all kinds of covetousness” (Romans 7:7-8).

This is the hot stove principle: Tell a child not to touch the hot stove, and the forbidden act suddenly seems all the more attractive; the biblical motto of the harlot reiterates this conceit: “Stolen water is sweet and bread eaten in secret is pleasant” (Proverbs 9:17).

In a real sense, those who embrace Christian values can find pornography all the more appealing merely because it is demonstrably forbidden by their commitment to God.

2. Failing at higher standards makes sin all the more novel and intoxicating.

We are wired to love novelty—it is an essential part of our development. When we encounter a new experience, our bodies release an extra dose of pleasure-producing chemicals, a mechanism which encourages us to experience and explore new things.

For me, the draw of pornography was largely a draw to novelty. Pornography, especially Internet pornography, keeps us coming back for more because it promises a veritably endless source of sexual novelty. Each new picture or video clip promises a new sensation. This is why porn-addicted men don’t simply log on, quickly find one appealing image, and gratify themselves. We keep searching. We can spend hours online. Why? Because it’s not about the climax; it’s about the search, the options, and each one is a novel sexual escapade. This desire for novelty is also the reason why we move from less graphic to more graphic pornography over time: the downward spiral is fed by a desire for novelty.

For the Christian who engages in pornography, typically there are added dimensions of guilt and paranoia. These have a way of compounding the novelty of each experience. This leaves a deeper emotional rut in the mind, as it were. Over time, guilt can become chronic—even a way of life. The guilt can become an essential ingredient to the addiction. There came a time in my life when feeling guilty was the only way I could feel normal.

So, What Is the Answer?

At first glance it would seem the conservative standards are the problem: get rid of the rigid moral code and the rest goes away, right? But when we seek to rid ourselves of Christian morals for the sake of keeping addiction at bay, we are playing fast and lose with theology. Christian morality is not merely an idea about how to live; it is based on real history—the belief that the Creator of heaven and earth has actually revealed Himself in human history. We desire to follow biblical morals because we are convinced that Jesus is the Christ, the revelation of God.

No. Instead of discarding our morals, we need to embrace the One who gave them:

1. Teaching higher standards should point people towards their need for a new heart.

The goal of teaching Christian sexual ethics is not encouraging people to “try harder.” Merely highlighting the hotness of the stove is not the point. To know better is not necessarily to do better. Instead, recognizing our inward pull towards rebellion, we are to be driven to a place of utter neediness: I cannot change myself.

When I was entrenched in addiction, I knew that acknowledging my depravity was par for the Christian course, but something in me always wanted to “graduate” from that place of utter neediness. I sincerely believed that spiritual growth meant moving from spiritual poverty to self-sufficiency. I never would have said it that way, but that was my attitude.

But the great promise of Scripture is not that our “flesh” will get better, but that God can bring about great internal change despite our rebellious nature. He does so, not by enforcing an external code of conduct, but by implanting a new internal drive in His people, what the Bible calls a “new heart.”

Just as sure as pornography stirs up lustful cravings in us, the Holy Spirit is a source of new, holy cravings. Romans 8 tells us all true Christians have the Spirit of Christ within them (v.9). Galatians 5 says we are given the “desires of the Spirit” (v.17), and when we keep in step with these desires (v.16) the lusts of the flesh (leading to sexual immorality, impurity, and sensuality) will not have their way in us.

2. Failing at higher standards should drive us to the cross.

The addict often finds himself in a cycle of abstinence, temptation, sin, guilt, penance, and back to abstinence. How do we break the cycle?

As we have seen, guilt is a big part of the addiction cycle. Guilt is that feeling of self-reproach, the feeling that one is culpable for some offense. When we feel guilt we desire absolution and reconciliation. Out of this longing, just like the pagan religions of old, we invent modes of penance that sooth our consciences: rituals that we hope will make us feel right with the powers of the universe again. We try to “get clean” by doing something good, to “make up” for the moral lapse. For some Christians, it is renewing a commitment to more prayer, more activity in the church, or donating more time or money to some worthy cause. For others, it is merely time: an extended track record of victory. For me, it was the emotion of worthlessness—a sort of mental flagellation; long hours of beating my heart to a bloody pulp. These are modes of penance that we hope will fuel greater obedience in the future.

This is where a proper understanding of the cross is critical. Yes, my sin means I deserve the lowest hell. But (in love) Christ experienced my hell on the cross. He experienced the agony of God-forsakenness, the curse of my sin. The Father channeled His just wrath for my sin into His Son. The cross is God’s altar to fully extinguish His anger, and, as a result, I am fully pardoned.

Furthermore, to prove Christ’s sacrifice was not in vain, God raised Jesus from the dead three days later. Weeks after this, His disciples saw Him ascend into the heavens, and there, we are told, He entered the holiest place of heaven. He poured out His Spirit on His people, and by His Spirit He can “purify our conscience from dead works to serve the living God” (Hebrews 9:14).

Knowing this, we should denounce all systems of penance as shallow cross-replacements. Knowing that my condemnation has been taken away, this grace from God breaks the cycle. Instead of guilt moving me to penance, guilt can, rather, move me to confession and praise. Instead of penance moving me to hollow abstinence, I am, rather, moved by real worship to experience a higher pleasure of God’s friendship.