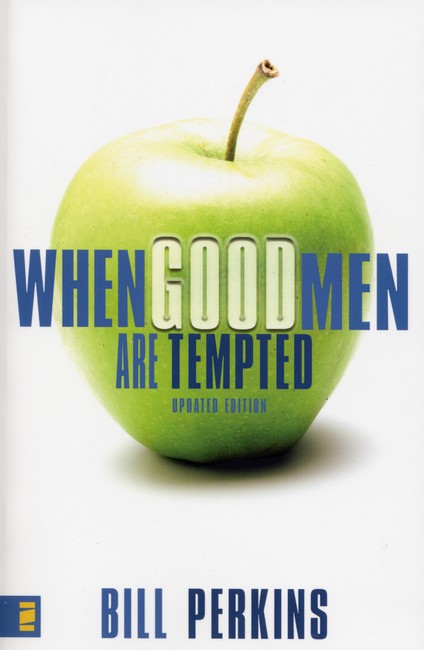 When Good Men Are Tempted is more than a how-to crash course in overcoming lust: it is a theology of the sin of lust and our freedom in Christ. Author Bill Perkins does more than just offer men practical tips in cutting back temptation (although the book is intensely practical). He offers men a glimpse at the core of true inner transformation that cuts sin off at the source.

In a word, this book is about identity. Perkins spends a great deal of time describing the core identity of a Christian. He capitalizes on the rich language of the New Testament that describes the Christian as a “new creature.” Since we are united to Christ by His Spirit, Perkins encourages us to “Discover the New You.” The risen Christ, who is dead to the power of sin, indwells us and brings with Him all His resurrection power.

Perkins’ diagnosis is that the chief reason why Christian men fall into sexual sin is because of “identity theft.” The mistake Christian men often make is letting their sin define them. Instead of fighting sin with the expectation that Christ will overcome, the Christian gives into sin because he believes, “That’s just who I am.” Perkins writes with an aim to help Christians steal back their identity from the enemy.

A Theology of Attraction and Lust

Perkins does an excellent job helping the Christian man gain a biblical view of sexuality. He first offers a compelling picture of the beauty of sexual attraction. He writes, “I’d like to lift the magnetism you feel toward beautiful women to the high and holy place I believe God intended it to occupy.” (p.18). He does just that, teaching men they are simply wired by God to enjoy the beauty of a woman. Moreover, in his cleverly titled chapter, “Why Naked Women Look So Good,” he affirms God designed women so that men would find them attractive, affirming women as the glorious masterpieces of God’s creation. Men naturally desire to see the mysterious beauty of a woman unveiled before their eyes.

In doing this Perkins seeks to demolish the “super-spiritual” standard set by some in the church that says any pleasure we derive from enjoying a woman’s beauty is lust. Perkins believes that most men, when they are honest with themselves, know the difference between admiring a woman’s beauty and feeding lust, between glancing at her and mentally recording her every move.

At the same time, Perkins affirms the Biblical ethic that men should only crave sex with their wives. Sin of lust comes into the picture when fail to meet this standard. Perkins offers three insightful reasons why lust has such a draw on a man’s heart: (1) because our sinful appetites desire what we are not allowed to have, (2) because our social context often creates more allure to sexuality by making it taboo, and (3) because we desire sexual novelty found in fantasy and illicit sex to recreate the thrill of young love without the fear of rejection. Each of these reasons is explored in depth, and with each one he explains the warped thinking behind sexual sin.

Another interesting dynamic in the book is the way Perkins weaves together the observations of psychology and the Bible. He identifies the four stages of the “addictive” cycle, the circle of habitually destructive behavior: (1) preoccupation, (2) ritualization, (3) acting out, and (4) shame (p.60-63). He links these with the “stages” of temptation and sin as outlined by James 1:14-15: (1) enticement, (2) conception, (3) birth, and (4) death. This Perkins calls “the temptation cycle” (p.171-190). Let’s look at them in reverse order. 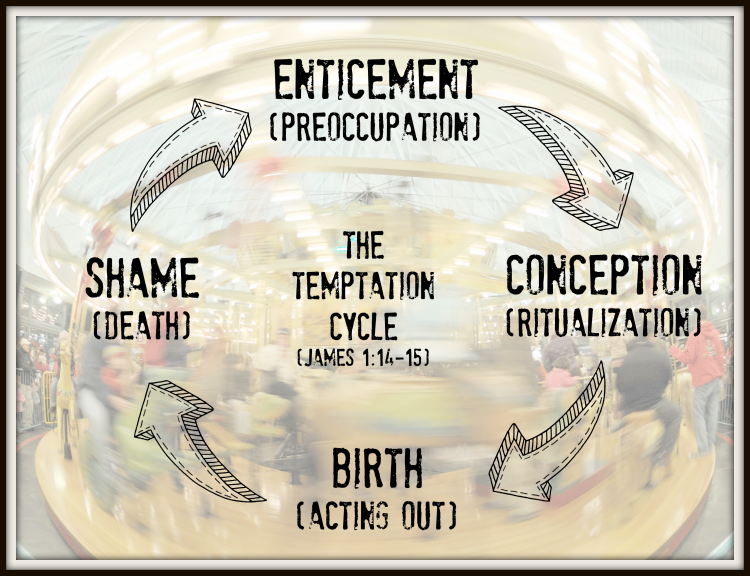 This is the inevitable result of sexual sin, indeed all sin: spiritual death. Sin promises the birth of new life, but, as Perkins reminds us: “[I]t never delivers. The baby is always stillborn” (p.187). This is often experienced inwardly as shame, a desire to hide from others so no one sees what we have become, and a desire to not even look at ourselves because we don’t like what we see. Perkins calls this “toxic shame,” something that “poisons our identity because it’s based on the belief that we’ve failed God and ourselves” (p.99). The pain of this experience should drive us into the arms of God, who’s love for us covers our shame, but instead we internalize the pain and desire to numb it with . . . more sin. This starts the cycle of temptation all over again.

This is the point in the temptation process where we fulfill our desire, where we give in and let our lust run wild. Ironically, Perkins uses very little ink describing this stage . . . ironic because we often spend the most amount of time obsessing over and feeling guilty about this stage: the moment of gratification. But Perkins wisely points out that as sure as birth will follow conception, so acting out will follow festering lust. We need to focus our energies on prior stages.

“Rituals are the activities that put feet on our fantasies” (p.61). What are some of these sexual-sin rituals? Perkins mentions several: surfing the Internet, checking out magazines in a book store, visually feasting on an attractive woman, driving by a strip club, reading personal ads, browsing in a video store, calling a former girlfriend, television channel surfing, asking a female acquaintance out to lunch, or calling a 900 number out of curiosity. In a very practical way, Perkins suggests men make a list of every ritual that leads to sin and then create a plan to avoid these rituals.

“While we may not always be able to control our desires, we can usually control our environment. We can eliminate opportunities to sin” (p.184). He sites different examples: from getting rid of cable TV in the home, to never turning on the TV in a motel room; from avoiding flirtation, to diverting the eyes; and from going to the gym when “hot babes” aren’t there, to getting Covenant Eyes on every computer (p.185-186).

But the real battle is found in the first stage.

“In a moment our lustful desire whispers, ‘Looks good, doesn’t she? There’s no harm thinking about how good she looks. What you would enjoy doing with her’. . . . Unless you avoid the temptation cycle here you’ll move on to the next stage. Once get there physical sin is unavoidable” (p.174-175).

Perkins is quick to point out there are unhelpful ways Christians typically try to deal with temptation at this stage. Some might try to overpower their lust with sheer willpower: “I can’t think about this. I won’t think about this.” This only stirs up our flesh by reminding it of the sinful pleasure that is off-limits to it. Instead, Perkins urges his readers to fortify their minds when they are enticed with truth from Scripture. He offers simple approaches to prayerfully meditating on the truth of God’s Word that will expose the lies that make temptation so enticing.

Perkins points out a powerful verse of Scripture, a prayer made from the belly of a fish: “Those who cling to worthless idols forfeit the grace that could be theirs” (Jonah 2:8, NIV).

Perkins offers his readers an enticing truth that breaks the allure of lust: the grace of God’s friendship. When Good Men Are Tempted calls men to put down their heart-idols, their objects of lust, knowing the experience of God’s love awaits them. This first step is perhaps the hardest of all: Perkins asks men to admit their lowliest sins, the most shameful things they have hidden from others, and to confess them before God. Like the Prodigal Son we may fear our Father’s reaction, but we have the assurance of God’s Word that He will not only forgive us, but He will celebrate His friendship with us.

This experience of favor with God is the source of new obedience. Perkins reminds his readers of the powerful words of Romans 12:1-2, that it is in light of God’s mercies our hearts find it reasonable and desirable to give ourselves to God as a living sacrifice. In His abundant mercy He has made us citizens of a New Creation.

Until that day when Christ makes all things new, we have the deposit of His Spirit within us, which changes us from the inside out. “An encounter with Jesus Christ changes the genetic stuff of your spirit” (150). Paul certainly knew this when He expressed His frustration with sin in Romans 7. Despite sin’s stubborn persistence, he knew: “[I]t is no longer I myself who do it, but it is sin living in me” (Romans 7:17). Perkins explains, “When Paul referred to himself as ‘I,’ he spoke of the redeemed core personality, that part of him that sought after God. He spoke of that place in his personality where God’s Spirit lived. He referred to his true inner-self that had been recreated by God and was truly a good man in Christ” (p.47). This identity shift is where the battle is won.

A Book for Men in Community

When Good Men Are Tempted is not only for individual male readers, it is for men in community. Each chapter is equipped with helpful study questions to be discussed in male community.

To aid us in the battle with sexual sin, Perkins calls men to have true “buddies” in the faith, friendships that have survived the relational crises of life and are built on deep trust. His hope is that every man in the Body of Christ would pursue the “ultimate masculine friendship” of brotherhood (quoting Dr. Herb Goldberg from his book, The Hazards of Being Male). These are the sort of men who stand with us in the battle against sin, men who offer not only accountability, but are willing to lay down their lives for each other. God willing, each of us will be that sort of friend to others.

So far, the perspectives we’ve examined in this series have each focused…

So far, the perspectives we’ve examined in this series have each focused on one particular aspect of willpower: willpower itself, as a resource. There’s the relationship between your goals and willpower. We’ve considered the role…

So far, the perspectives we’ve examined in this series have each focused…

So far, the perspectives we’ve examined in this series have each focused on one particular aspect of willpower: willpower itself, as a resource. There’s the relationship between your goals and willpower. We’ve considered the role…