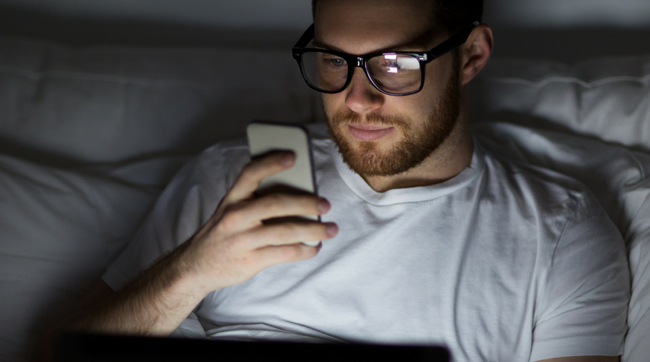 Here’s another example. As a young person, I was told that it takes seven years to digest swallowed gum, so I never swallowed it. However, science says the gum goes through the same process and takes the same amount of time to digest as any other food.

I now understand what is true, but I still behave as if it were false. I still refuse to swallow gum and encourage my kids not to as well, because deep down, I still believe it will stay in my stomach for a long time. I justify my behavior based on something proven unscientific and flat-out wrong.

A 2014 Barna Group survey revealed 65% of U.S. non-Christian men, and 64% of U.S. Christian men, looked at pornography at least once a month. Here’s the breakdown according to age:

As the timeframes get smaller, so do the percentages of men who view pornography that frequently. When asked about viewing pornography several times a week, 42% of U.S. non-Christian men and 37% of U.S. Christian men admitted to doing that. Here are the breakdowns:

When it comes to this sensitive topic, it may be the case that participants are less likely to be 100% truthful. Even when the survey is confidential, there’s a likelihood of participants who may want to underreport something that they feel is embarrassing or shameful. So the numbers of the survey may be higher.

The good news is that many men have realized the devastatingly negative impact pornography has on themselves, their relationships, and society.

Organizations like NoFap, Reboot Nation, Fight the New Drug, and Covenant Eyes, among others, are bringing this topic to light. Because of the work of these organizations and others, many men have found freedom through education and accountability.