The wall was plastered with images of scantily clad women. With this as the backdrop, he stood up and said, “When you feel comfortable in your own skin, come back and see me.”

Extending his hand for a handshake, she reached out while trying to conceal her disgust.

This was the first and last contact my sister had with this modeling recruiter. She had been given a recruiter’s card by this particular agency and thought it would be neat to check out. To her disgust and shock, the agency was only interested in hiring girls who were “comfortable” (a.k.a., willing) to show it all.

“There are hundreds of girls dying for this position,” the recruiter stated. “We have no interest in hiring picky girls.”

Determined to keep her dignity in tact, she kindly declined his offer to return and hasn’t looked back since.

Sadly, this scenario isn’t uncommon. Being a model is something girls and women idolize today. Young women with “model potential” are willing to do whatever it takes to sign a contract. Even if it means stripping down to nothing.

Today, this mindset stretches far beyond the walls of the modeling world. Modern women everywhere are taught that it’s perfectly normal to uncover 90% of their skin in public. Everything from bathing suits, to formal wear, to athletic clothes has been stripped down to the bare minimum.

Sadly, though, the results have proven to be anything but empowering. If you talk to the average woman today, you will slowly uncover a defeated woman who is insecure, unhappy, and completely discontent with her body and her life.

Empowering? I don’t think so.

A study called “The Paradox of Declining Female Happiness” stated, “Women are less happy nowadays despite 40 years of feminism. Despite having more opportunities than ever before, they have a lower sense of well-being and life satisfaction.”

Rather than jumping on board with our culture’s push to undress, I’m proposing a new method for empowering women. Modesty. I strongly believe that modesty empowers women far (far!) more than nudity does.

Women were created by God to be physically beautiful—full of soft curves and a lovely figure. However, God didn’t design the intimate parts of this beautiful body to be consumed by any passerby. When we, as women, uncover and reveal our intimate body parts, we cheapen their value.

A large diamond is considered precious and valuable because it’s rare and uncommon. Modesty works the same way. By covering our intimate parts, we boldly state that we are precious, valuable, and not available for common consumption.

Pornography and immodesty have completely backfired on women. Rather than gaining more respect and dignity in the eyes of men, we have become objects to consume. By undressing, we have trained many modern men to view us as nothing more than eye candy. We have thrown our dignity down the drain at the false promise of becoming more empowered.

Putting our clothes back on is the first step to regaining some ground. Actions speak louder than words. By dressing modestly we silently proclaim that we are not purchasable objects. We are dignified women who value our bodies, and expect the same from others.

As Jessica Rey stated, “Modesty isn’t about hiding ourselves, it’s about revealing our dignity.”

Women who dress with modest class naturally demand more respect. When we respect our own bodies, we encourage the respect, honor, and admiration from those around us.

It’s not uncommon to be out in public and see a random guy doing a “once over” on a girl. When we, as women, undress and reveal sections of our intimate body parts, we shouldn’t be surprised when strangers feast on our body. By dressing immodestly we invite everyone, including creepers, to enjoy what isn’t theirs.

The attention we receive (good or bad) is based on our physical allure, not on who we are as a person. By dressing modestly we instantly put the creepers in their place. We send the message that our face is where the focus needs to be. We encourage people to get to know “us” not our curves. 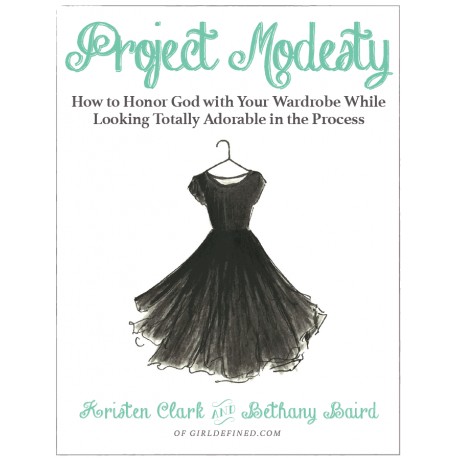 If you’re interested in learning more about the power of modesty, I encourage you to grab of a copy of my new ebook, Project Modesty: How to Honor God With Your Wardrobe While Looking Totally Adorable in the Process.

This book was written with the goal of inspiring young women ages 12-24 to dress modestly in this modern age. If you have a daughter, or know someone who does, this book will be an invaluable resource for her. Filled with down to earth tips, insights, fashion advice, and dozens of original pictures, this ebook will give your daughter the knowledge and inspiration on the “whats,” “whys” and “hows” for dressing modestly.

I would love to hear your thoughts in the comment section below.

Accountability: It Really Is a Big Deal

“Don’t tell anyone about this. It just really embarrasses people and they…

Accountability: What It Really Is and Why It Matters

Accountability is a critical component for growth and improvement. Everyone needs it!…

Accountability is a critical component for growth and improvement. Everyone needs it! We’ll explore in more detail what accountability looks like and how it works to your advantage in different areas of life. What Is…

Accountability Groups: How They Succeed, Fail, & Simple Steps to Start

Accountability partners are a popular idea, and if done right, having one…

Accountability: It Really Is a Big Deal

“Don’t tell anyone about this. It just really embarrasses people and they…

Accountability: What It Really Is and Why It Matters

Accountability is a critical component for growth and improvement. Everyone needs it!…

Accountability is a critical component for growth and improvement. Everyone needs it! We’ll explore in more detail what accountability looks like and how it works to your advantage in different areas of life. What Is…

Accountability Groups: How They Succeed, Fail, & Simple Steps to Start

Accountability partners are a popular idea, and if done right, having one…