iPorn: Coming to a School Near You

$1 billion. That’s how much America’s second-largest school district is paying to get iPads into the hands of every one of its 650,000 students this year. 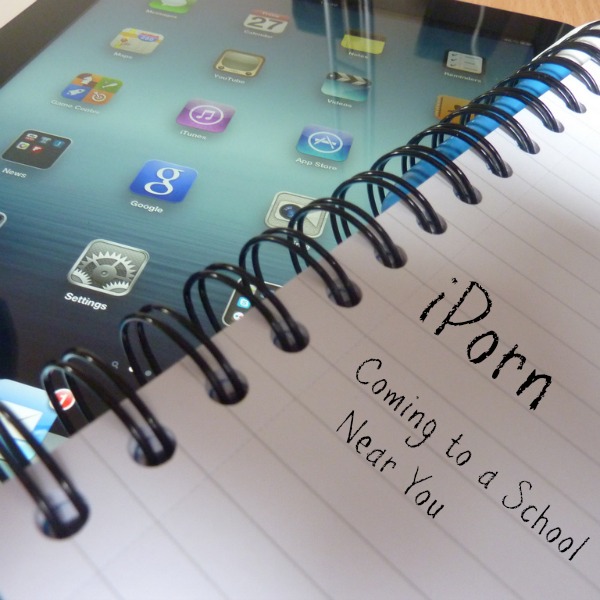 The Los Angeles Unified School District (LAUSD) is paying $678 per iPad—each one preloaded with educational software—and installing wireless networks on all of its 46 school campuses. Nationwide, educators are looking to districts like this one as champions of new technology in the classroom.

But many parents and educators alike are concerned about this trend. How can schools safely educate students through technology when that same technology is a portal for pornographic content?

The Growth of iPads in Schools

LAUSD is not the only California district beginning a one-to-one program with tablets this year. Since the state is providing funding to implement Common Core State Standards—which strongly emphasizes the role of technology in education—several public schools are jumping on board.

This fall, Sunnyvale School District received 2,200 devices for its students. Two schools in Fresno’s Sanger Unified School District have begun a pilot program for the district, making the iPad a student’s one tool for writing papers, handing in assignments, and even taking tests.

This recent move is part of the digital push in education. By next school year, all California schools will be required to administer tests online as a part of the Smarter Balanced Assessments initiative.

Some California educators say their state is actually behind the national trend. Two years ago, one of the fastest growing districts in South Carolina, Lexington County School District One, distributed 6,500 devices to students across four high schools. The next year they implemented a similar initiative for 5,300 middle school students. They soon became a model school district to others around the country.

Donald Elementary Principal Michelle Wooten says she’s excited about the recent delivery of 400 iPads to her school because she wants to “prepare them for the 21st Century.” Schools like this do not see new technology as an educational novelty, but as a requirement.

iPads are becoming the new notebook and pencil. Students can record lectures, and teachers can more easily share resources. Traditional textbooks are being replaced with much cheaper digital books, possibly saving families more money over time. Some schools are even installing interactive whiteboards in the classrooms that link to the iPads.

Schools in lower-income areas (like LAUSD) are excited about how school-issued iPads will finally “level the playing field” for poorer students, giving them the same access to educational tools.

Tablets, some believe, are perfect for self-directed and self-motivated learning. One survey indicates 69% of students who have a school-issued iPad feel that using the iPad motivates them, and that they work better with it than without it. Six out of ten faculty agree: students seems more motivated by lessons that incorporated the iPad than those that did not. Additionally, 73% of students and 67% of school staff say the iPad also seems to help improve the overall quality of the students’ work.

Another study shows that Kindergarteners who use the iPad score higher on literacy tests and are generally more interested in learning. Fifth graders who regularly play the iPad game Motion Math for 20 minutes or more a day for five days increase their test scores by 15% on average. More than six in ten (64%) high school seniors say tablets help students to study more efficiently.

Many teachers see the use of tablets in the classroom as a game-changer when it comes to inspiring creativity. No more arts and crafts; now students can create movies, do screencasts to show how to solve a problem, and edit photography. Teachers are excited that their students can easily become literate in new media technology. Tactile screen technology encourages kinesthetic learning with hands-on, interactive apps.

Older students are encouraged to publish their writings and work online via blogging platforms like WordPress or photo blogs like Instagram. Students are encouraged to collaborate online to finish assignments. By pushing students toward online publication and collaboration, this requires students to think not only about the audience and purpose of their creations, but the use of each digital platform as well.

Unfortunately, experience is already showing that throwing iPads into the classroom does not automatically make for a better learning experience.

The first major limitation of iPads in the classroom is not due to the technology, but the teachers. Even when teachers are issued their own iPads, training is still needed to incorporate tablets into the learning process. Without this training, iPads easily become just very expensive notebooks. Most teachers are simply unaware of all the tablet-friendly Web tools and enormous range of apps available.

Jim Stigler, associate dean for research and innovation at UCLA Division of Social Sciences, says that classrooms that successfully use iPads will be 10% due to the iPad, 30% due to the software, and 60% due to the teaching. “As long as people think the iPad itself is the main ingredient for success, it will probably fail. But if we invest seriously in improving teaching and software, the potential is huge.”

With more technology comes a greater need for someone to manage that technology, and this often falls to the teachers. Many don’t want to see teachers taking valuable class time to become IT administrators. And of course, with new technology comes the temptation for distraction—and teachers needing to police this distraction.

Of course, not everyone believes screen-based education is ideal for learning anyway. American Academy of Pediatrics recommends children should live screen-free life until the age of two, then no more than a maximum of two hours a day thereafter. With most children already having 5-7 hours of screen time every day, adding more during school hours has medical professionals and educators concerned.

“As a teacher, I’m particularly concerned about the conflict between old-fashioned literacy and screen-based learning,” says Sue Palmer, author of Toxic Childhood.

Traditional literacy, she says, helps children “slow down” their thinking, to engage in rational thought and deep, conscious processing of information, but using electronics speeds up the mind—conditioning them for instantaneous results without any personal effort. “There’s nothing wrong with digital learning as long as children are also capable of sequential, logical thought,” Palmer says. “But the earlier they become dependent on screen-based learning, the more difficult it will be for them to slow down their minds, and thus reap the benefits of ‘old-fashioned literacy.’”

Palmer warns parents not to adopt a sooner-the-better approach to teaching children tech proficiency. With their bodies and brains still developing, “they need time to acquire basic human skills like empathy, the capacity to focus attention and conscious control of body and mind. So something that’s OK for a grown-up is not necessarily OK for a child. What they need is to learn the old-fashioned skills of literacy and numeracy, which take time and focused attention.”

Of course, schools need to think about minors accessing adult material through the devices they distribute.

Schools typically set up filtered proxy servers on their campuses. When students need to use the Internet, their device connects to the school servers and all Internet traffic is filtered campus-wide. This is only effective on school grounds as long as other wireless signals can’t be accessed. It is completely ineffective, of course, off school grounds.

For around-the-clock coverage, there are two viable safety options for schools.

2. The second is to have safe browsers—such as Covenant Eyes—installed on every device. These browsers are designed to work hand-in-hand with the iPad’s built-in Restrictions: lock down Safari and other apps that access web addresses, and then the safe browser becomes the student’s one portal to the Internet.

Harden believes ultimately it is parents who take the lead in protecting their children online. “If you’re a parent, you need to talk with your children about the harmful material that is everywhere online. You’d be a fool to rely on your kids’ school to do that for you. School officials won’t be able to protect young children from harmful online content, and I doubt they are much concerned about it.”

Early stories of iPad adoption in schools bear this out. When Manitou Springs School District in Colorado gave iPads to their students, they decided not to restrict the students from using the unfiltered browsers, saying that the “educational value” of these browsers was “too great to justify removing them.”

Manitou required parents to sign an iPad User Agreement, stating the parent would not hold the school district responsible should their students access material that is harmful to minors away from a school setting. Of course, parents could opt that their child not receive an iPad. Choosing this, parents would have to sign a different technology agreement, which stated, “I understand that my child may not have the same learning opportunities as other students.”

For parents in school districts like this, what are the options?

1. Opt not to get an iPad. Some schools don’t give this option, requiring students to use specific apps for classroom work or test-taking. Even when allowed, next to peers using state-of-the-art tablets, it is easy for students to feel quite disadvantaged.

2. Use Apple’s built-in Restrictions. The Restrictions feature allows parents to lock down the Safari browser, FaceTime, iTunes, the installation and deletion of apps, the ability to listen to podcasts or music with explicit lyrics, or the ability to watch movies and TV shows at mature levels. With iOS 7, these Restrictions come with the ability to block “adult material” in all browsers.

This option may work for some schools, but if students are required to download apps at school, this will require parents to be present to enter their passcode which locks and unlocks the Restrictions.

3. Filter at the router level. Parents can investigate filtering at the router level, which would filter all Internet activity for every device in their home. This works as long as (1) other wi-fi signals cannot be accessed in the home, and (2) the child only uses the iPad at school or at home.

Tablets in Schools are Not Going Away

The trend of iPads in schools will only continue to grow. Some schools have even taken this to the nth degree, starting “Steve Jobs schools.” Some 1,000 students in the Netherlands came to school this year with their own iPads. These schools have no chalkboards, no formal classes, no seating charts, and no teaching from the front of the room. There are no parent-teacher meetings, no grades, no fixed school days or school vacations. The learning is entirely child-directed. Teachers are merely present as “coaches” to help kids reach goals and advance to new levels of learning. The iPads give kids access to a “virtual school” available around the clock, 365 days a year.

Public education as we know it is changing. The more technology is placed in the hands of our children—not as a novelty but as a requirement—the more parents will need to be vigilant about protecting young minds.

8 comments on “iPorn: Coming to a School Near You”