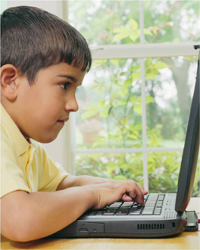 Janeen has an infectious smile. It shines on the soccer field or when she plays piano. But when this 12-year-old honor roll student’s grades began to slide, her mom began to dig for answers and discovered her daughter engrossed in Internet pornography.

Therapist Richard Blankenship (who changed Janeen’s name for this story) treated Janeen for three months to help her escape what had become a secret addiction. Janeen’s story raises concern, but even more alarming is the increased exposure kids have with Internet pornography and its impact on them.

Blankenship said many parents are in denial, believing their child or teen would never access content online that is inappropriate, especially pornography. But in today’s sexualized culture kids are being exposed to constant lures and suggestions that make them curious at an ever-younger age, he said.

Early detection and intervention is key, said Dr. Doug Weiss, a father, psychologist, and nationally known author who has appeared on many national talk shows including Oprah, Dr. Phil, Good Morning America, and 20/20. Parents need to prepare better so they can react in a way that encourages healing, he said.

About 93% of boys and 62% of girls will be exposed to Internet pornography and most will deal with it on their own. Unfortunately, that can lead to a lifetime of problems. For instance, an obsessive use of pornography is listed as a major contributing factor in 56% of divorce cases.

To protect their kids and intervene when needed, parents need a plan for media use. And they need to follow, enforce, and update that plan throughout the year.

“Parents have a difficult job, because technology is constantly changing,” agreed Kevin Maginity,  a pastor and Internet Safety Consultant with Covenant Eyes. “But if parents create a plan, consistently apply it, and talk about these issues with their kids, it can have a major impact on their kids’ lives.”

Use Modern Tools for Modern Times

The first step every parent should take is to download software that monitors how computers and handheld devices are used, said Weiss. Covenant Eyes is the only software he recommends, he said, because the Internet Accountability reports open doors to conversations that most parents are missing.

If parents don’t take this first step, all of the other Internet safety guidelines are likely to fall short.

Setting limits on screen time encourages better choices, because kids are less likely to surf the Web and surf television channels out of boredom, said Jason Evert, an international speaker and author of 10 books. He and his wife Crystalina speak to more than 100,000 teens a year, and they see kids who are absorbed with media.

“The average child will spend more time watching television by the time he turns 7 than he will spend talking to his father through the entire course of his life,” Evert said. “The average teen spends 8 hours a day in media usage.”

Further, he said, when you include multi-tasking with media, such as listening to music while engaged in other activity, the average teen consumes 11 hours worth of media a day. “That’s more time than they spend sleeping or at school.”

Weiss said this continued consumption of media often perpetuates the sexualization of kids and teens. “It’s not just the pictures, it’s the ideas,” he said. “They’re watching TV shows where everyone is cheating on everyone else, and they are still learning about sexually inappropriate stuff.”

Weiss suggests that parents create a media and Internet budget for kids and teens, which is limited to two, possibly three hours of total media use. He encourages parents to create an overall baseline for television, gaming, handheld devices, and Internet use, such as a half hour or an hour per day based on age. Then kids can earn additional time for doing chores or as reward.

“So you can use media as currency,” Weiss said. “It’s a way of giving the kids some power in that decision (for how media is used).”

When and how often should parents talk about inappropriate content in media? Don’t wait until they are teenagers, these experts agree, and age-appropriate conversations should be at least monthly. They can spawn from television, radio, and magazine ads, or from what they hear others say.

“The world is not ashamed to speak about sexuality to your kids, and if parents are quiet, then the world will fill that void of silence,” Evert said.

Weiss encourages parents to practice these conversations with their kids, because kids need to know that their parents are mature enough to handle it. A child or teen may feel guilt, anxiety, and be upset about seeing inappropriate content; but even more they may be afraid of how their mom or dad might react if they talk about it. To help a child be comfortable talking about anything, Weiss has parents and kids rehearse their conversations to set the stage for when real life happens. A child or teen makes up a story about seeing inappropriate content at a gas station or on the Internet, and then they walk into the room and share that story with their parent.

“We’re going to do this two or three times so that you know that you can tell me and you’re not going to die, OK?” Weiss explains. “You have to practice it, otherwise they may not tell you.”

“So pornography is designed to give you a secret; so it’s designed to make you sick,” Weiss rehearses as though a parent talking to a child. “You are going to see it here or there, maybe at school or someplace in public. When you do, just let me know… there’s no secret and you won’t feel so bad.”

It’s easy to let the basics of Internet safety and guidelines to purity slip. Parents are busy and kids test and even push limits. Being consistent in upholding the technology rules of the house will establish them as the family norm, Maginity said.

For instance, kids should only use Internet enabled devices in open or common areas, and not in bedrooms or behind closed doors. This basic practice has been a hallmark of Internet safety for years, Maginity said, but as laptops and handheld devices made the Internet more mobile many parents wavered on this precaution.

Internet filtering is especially important for younger kids. In fact, Maginity said, parents should accompany their young children whenever they go online, because mistakes are too easily made. As a bonus, filtering will keep accidental inappropriate exposure to a minimum, even when parents are guiding the mouse for their young children.

“Being a good cyber parent requires consistent action,” Maginity said. “You’re never done. The task is never complete, however, doing it well can save you from problems that require a lot more effort and even pain.”