Do Your Kids Think You're a Hypocrite? - Covenant Eyes 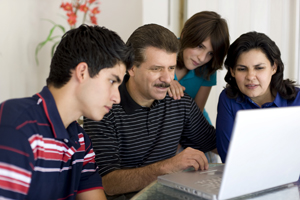 Monkey see, monkey do. Generations of parents have known that good parenting starts with being a good role model, but now we have the science to prove it.

When it comes to sex, drugs, smoking, morals — and yes, Internet use — parents have more influence than they might think. Even babies smile because they mirror what they see from their parents, said Dave Brown, Director of Counseling and Support for PureHOPE.

Kids are more likely to embrace rules for the Internet when they see their parents model Internet morals and accountability, Brown said. Without a doubt, parents need to monitor how their kids use the Internet and have good conversations with them. But Brown says it is important for parents to demonstrate accountability as a lifestyle, because the most successful people get to have coaches and confidants throughout life.

“[Modeling] has a profound impact,” said Richard Blankenship, author, speaker and director of counseling at the North Atlanta Center for Professional Counseling.

“When the parent says ‘I’m not asking you to do something I’m not willing to do,’ it sends a valuable message,” Blankenship said. “Modeling is a great tool.

“Modeling accountability is critical in the home. Kids may try to say their parents are being hypocritical, but if the parents are modeling that, the kids don’t really have a case.”

While there are a few studies about how parents incorporate new technologies into their home, there are many studies that examine how parental modeling and influence impact the character and morals of their kids. Blankenship and Brown agree those studies are easily correlated to Internet use, because they illustrate how children, teens and even college students are watching their parents’ behaviors and listening to their counsel.

A study by family scientist Laura Walker, published in the Journal of Youth and Adolescence, found that if parents kept good relationships going with their college sons and daughters they were less likely to engage in the three risky behaviors studied: drugs, alcohol, and risky sexual activity. Dads, specifically, had a strong influence on lowering the likelihood of their college students doing drugs or engaging in risky sexual behavior. Students were less likely to drink alcohol when their moms played an active role in their students’ lives.

Moral behaviors must be learned.* There are many forms of learning, but scholars agree: “One of the surest ways to help our children turn their moral reasoning into positive moral behavior is to teach by example.”**

‘Internet usage really needs to be a reflection of the morals of the home,” he said. “Is it reflecting who we say we are morally and spiritually, or is it reflecting a double-life?”

For instance, he said, if an inappropriate website appears on a parent’s computer screen, the parent can use it as a teachable moment. Do they let someone else know? Do they talk about it? What actions do they take to make sure the computer is protected, cleared of cookies, or latent images? If a parent models that behavior, a child will be more likely to adopt similar tactics and even seek out a parents’ support, he said.

“That’s valuable behavior to model for your child,” Blankenship said. “It shows there’s no shame in asking for help or seeking support.”