How do you feel about being tricked? Lied to? Manipulated?

I’ve never met anyone who told me, “I was deceived all those years ago, and it felt so good when I found out! I love how my life turned out after I was duped.”

A classic hustle in Thailand is the “Thai gem scam.” A coordinated group of locals targets a gullible tourist. They lure him with the promise of a great deal on priceless gemstones at an amazing price. With visions of flipping rare Oriental treasures for a huge profit back home, the target unknowingly becomes the main character in a carefully scripted play. Like a master fisherman lures a fish onto his dinner plate, the native cast members lead the foreign profit-seeker into a purchase he will always regret.

How would you feel if you lost thousands of dollars in a scam like this? Anger? Outrage? I imagine you would. You’d want justice. And more than anything, you’d be certain never to fall for anything like it again.

Hundreds of millions of people are lured by a worldwide scam into a life they will always regret. I’ve fallen for it myself, and you may have too. The pornography industry rakes in tens of billions of dollars by exploiting humanity with predatory deceptions.

And many of us are falling for their lies at younger and younger ages.

For Hef’s vision to be successful, he’d have to reshape society with powerful propaganda. Schuchardt says:

As an adman, Hefner saw the need to package sexuality into aspirational categories and tell a story about it that placed men in the narrative itself in a way that was not just acceptable but downright desirable. Thus he packaged himself as a Victorian gentleman at the hunting lodge.

Credit Hefner with popularizing the mythology that this was “adult” entertainment for “men,” adding the same aura of pseudo-sophistication that is still exploited 50 years later by bars that call themselves “A Gentleman’s Club.”

So while catering to our basest desires, Hefner sold the lie that staring at photos of airbrushed young women was something a “gentleman” did. But to do that, he had to twist the definition of “gentleman” from the chivalrous, faithful, responsible man who sought to protect a woman’s honor, to one of eternal adolescence with a focus on his own pleasure regardless of the cost to others. Hef’s false new role model, a pornified view of manhood, enabled him to spawn a worldwide dynasty.

Hugh Hefner birthed an industry that succeeds by deceiving us into a false vision of the good life. How does that make you feel?

How did the pornographer accomplish such an impressive bit of legal wrangling? By co-opting the cherished American first amendment promise of free speech.

But Big Porn’s flagship lobbying group flaunts its victory over the founders in its deceitful name: the Free Speech Coalition. They’ve facilitated the legalization of prostitution, rape, assault, and even apparent (or actual) sex with minors, as long as there’s a camera rolling to transform the crime into “speech.” Never mind the victimization of performers and the harm to all of the viewers who become desensitized and even celebrate brutality in the name of “free speech.”

How does that make you feel?

Be Angry, and Do Not Sin

Many of us have been taught that anger is sinful, so we default to being passive or we stuff our feelings in order to avoid blowing up. Others overreact at the slightest offense and are known for a short temper. These harmful extremes aren’t the anger I’m hoping to inspire.

Anger is like fire. Out of control, it destroys homes, neighborhoods, forests, families, and cities. But contained in a fireplace, fire gives comforting warmth. Or, when fueling a kiln, fire hardens pottery or purifies precious metals.

The God of the Bible gets angry when people fall into things he calls sinful. Why is he angry? He’s angry for the same reason a mom is angry when her child runs into the street after being told ten times not to: love. When those we love are in harm’s way, whether by their own actions or the behavior of others, anger can be a loving response.

Ephesians 4:26 says, “Be angry, and do not sin” (ESV). I used to think this verse meant that a certain level of anger is okay, but my anger shouldn’t boil over into sinful behavior.

The Fire That Fuels Your Recovery

With my feelings of remorse, regret, and fear, I felt a growing level of anger. Anger at the way I had been exploited. Anger at the spiritual warfare aimed at destroying my marriage and my intimacy with God. And anger that my hopes and dreams were at risk because I was the target of a predatory industry, empowered by a “roaring lion seeking someone to devour” (1 Peter 5:8).

This righteous indignation, along with accountability, spiritual disciplines, and the grace of God, has kept me on a porn-free journey all of these years.

If enough of us respond to Big Porn’s deceptions with this kind of life-changing and enemy-defeating anger, we can win. And even more, we can change the course of history by fighting for a future where no child is lured by the traps that used to ensnare us. 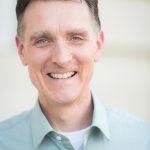 Doug Smith is a lifelong software developer, Bible student, and most importantly, a dad to four wonderful daughters, and the husband of award-winning author Lyneta Smith. Doug is the author (and audiobook narrator) of [Un]Intentional: How Screens Secretly Shape Your Desires, and How You Can Break Free. He is also honored to serve the Covenant Eyes mission as an Android developer.