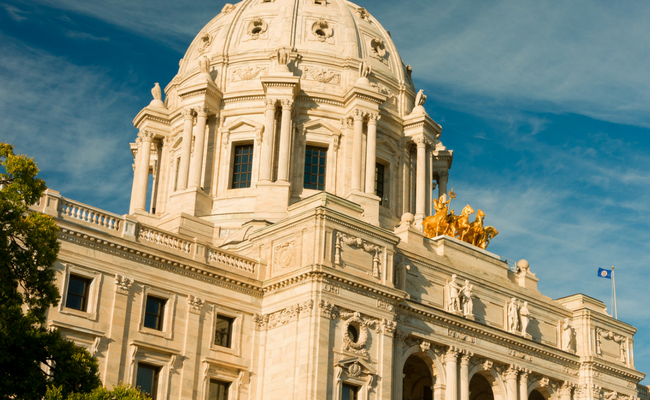 Amanda Zurface is the Catholic Content Specialist for Covenant Eyes. Amanda holds a license and MA in Cannon Law and a BA in Catholic Theology and Social Justice. She has served in various roles within the Catholic Church, both in the United States and internationally. She the co-author of Equipped: Smart Catholic Parenting in a Sexualized Culture and Transformed by Beauty. She resides in Lexington, Ohio, where she also manages her own website that provides online spiritual direction and canon law consultation.

Americans are becoming more and more educated on how pornography negatively impacts society. We are beginning to realize that it impacts real people. A driving force behind human trafficking is the belief that it’s okay to use people, and specifically to use people for sex. Pornography reinforces this belief.

The state of Minnesota has passed a groundbreaking bill recognizing pornography as a contributing factor in human trafficking. State legislators have affirmed that pornography, like sex trafficking, is a commodification of the human person and should be studied as a cause on both the supply and demand side of the problem.

What the bill does not do:

The effort to educate Minnesotans on the connection between pornography and human sex trafficking and help those who are commodified by these industries was led by the Minnesota Catholic Conference under Jason Adkins, Executive Director and Shawn Peterson, Associate Director for Public Policy.

According to Adkins, the Minnesota Catholic Conference pursued legislation because of “an awareness among our staff, which is relatively youthful, that pornography is wrecking families, undermining healthy personal development, poisoning relationships between men and women, and contributing to the throwaway culture. The U.S. Conference of Catholic Bishops’ document Create in Me a Clean Heart provided momentum to translate this inchoate sense of things into action.”

“When Republican leaders in our [Minnesota] State House prohibited all resolutions during this biennium, we were forced to go back to the drawing board and, we believe, develop a more impactful piece of legislation than merely a resolution identifying a problem. Our legislation bridges partisan divides and brings together progressives and social conservatives, both of whom care about pornography and sex trafficking, and provides them a place to foster some common ground on a difficult issue.”

Public Awareness on the Harms of Pornography Grows

With such a great success in Minnesota, Adkins said, “What was once a whisper is now a part of the public conversation. The public is discovering that pornography is not just a harmless pastime but instead a multi-billion dollar industry that perpetrates violence against persons. It was amazing to hear witnesses come forward at our State Capitol talking about its harmful effects.  The public will now have a greater understanding of pornography’s contribution to sex trafficking and that there are consequences that flow from our consumer choices.”

This Minnesota legislative effort took a little over two years of study and collaboration. When asked what was the most heartening and disheartening part of the effort, Adkins explained, “Most heartening was that the bill passed unanimously in both houses of our Legislature. That’s not because it is perceived to have minimal impact. Rather, it was from the strength of our message, and the textbook lobbying effort from our advocacy team, which also included the state family policy organization. Disheartening were the numerous stories from legislators, supporters, and testifiers about the scourge of pornography and its destructive effects on persons, families, and society.”

Even though the Minnesota Catholic Conference is celebrating this great accomplishment, they are already planning for what they can do next to bring more awareness to the issues at hand and assist victims of pornography and human trafficking. Adkins explained, “Our goal is to develop a new piece of legislation each biennium to both incrementally develop a deeper awareness that pornography is in fact a public crisis, as well as do what we can to provide assistance for its victims. We hope that pornography is eventually seen as a cultural taboo, much like smoking in restaurants or not recycling. Ultimately, it takes a change of attitudes and values–as well as a conversion of heart–to get there, but politics can nudge that dynamic in the right direction by raising greater knowledge of the problem.”

Covenant Eyes is grateful to the Minnesota Catholic Conference for their many great efforts. Adkins expressed, “Covenant Eyes was a valued partner and resource throughout the legislative process.”