For anyone caught in a daily cycle of destructive behavior, it can be a struggle to hang on to the hope that it’s possible to beat your addiction.

The story below, although it centers around an addiction to food, illustrates the power of accountability in our lives. With the right knowledge, partnerships, and personal drive, Jon lost nearly half his body weight and conquered a lifetime addiction that would have killed him. We know his story will inspire you to overcome whatever temptations you may face, including an addiction to pornography.

I’m 37 years old, and I’m nearly half the man I was just one year ago. 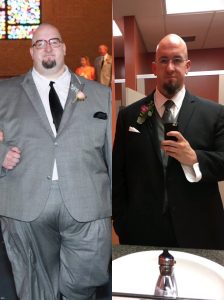 I was always a big kid. People have called me “Big Jon” for as long as I can remember. It didn’t bother me growing up.

I would beat people to the punchline of a fat joke. My funny personality masked any negative feelings I had inside. It got me through my teen years.

After college, I was dealing with a lot of guilt. I masked that with food. It couldn’t hurt me, and it made me feel better.

I couldn’t sleep in a bed. I slept in a recliner. I couldn’t tie my shoes, so I wore slip-ons. I had to drive a Ford Excursion because it was the largest SUV on the market and the only vehicle that could hold me. I couldn’t fit in a restaurant booth.

Here’s what my normal food schedule would be on a given day:

For breakfast, I would have two chicken biscuits, three chicken nuggets inside rolls, and I would put grape jelly all over them. I’d work a few hours and then get three doughnuts and two 16 ounce sodas. For lunch, I’d get a large chicken plate, extra side of cheese curds, and an extra side of Texas toast. By 3 p.m., I’d go back to the doughnut shop for three additional doughnuts and two more 16 ounce sodas. Then, on the way home from work, I’d stop for two chicken breasts, three orders of mashed potatoes and gravy, a large sweet tea, and a family size Bundt cake. Sometimes on the way home, I’d pick up a large pepperoni pizza and eat the whole thing.

After going home, I would visit a friend, but first stop to pick up the largest Italian ice I could get. After the visit, I would pick up three more doughnuts, a muffin, and a half gallon of milk. I would sit in my recliner and eat and drink myself to sleep.

It happened almost every day.

I thought I was going to die. I would have pains in my chest and would go to sleep thinking I would have a heart attack and may not wake up, but I kept doing it.

My pant size was a 74” waist. I had to special order clothes online. You know it’s bad when the big and tall men’s store can’t help you. My blood pressure was 194/118. I believe I was months away from death.

I needed to lose 350 pounds. I thought even if I lost a healthy two pounds a week, it would take three and a half years. I had a hard time staring that one down.

Accountability Was My Turning Point

The turning point came when I saw that an acquaintance of mine posted some food on social media. That’s what people do, right? First off, it made me hungry, but he seemed to be eating well and taking care of himself, so I reached out to him.

He told me he believed God was telling him to train me. I asked him if God also told him where the money was going to come from because I didn’t have it. He said he wasn’t worried about that.

He challenged me to get up early Saturday morning to go grocery shopping with him. I normally slept in on Saturdays, but figured it was worth it just this time. He showed me what foods I should eat and what I should not eat.

Understand that at that point I could not stand for more than one minute at a time. My legs would get swollen, and I would begin to sweat. It was so difficult for me to just walk slowly through the store. I’d get out of breath. I had to lean on the grocery cart.

At the end of that trip I remember saying to myself, “I can do this.”

He then challenged me to meet him at the gym Monday at 7 a.m. I didn’t want to do it. He said that if I was going to make excuses, then he could not do this for me.

I lost 18 lbs. in the first week. Second week, seven more pounds. In the first 90 days, I lost 105 lbs. It wasn’t like I was doing anything special. I worked out three days a week and ate better.

I had tried to lose weight at least 20 times prior to this, but the big difference this time was that I had someone I was accountable to who made sure I did what I was supposed to do. I figured I could help others too. That’s what has kept me on this journey.

Three months in, my trainer was injured in a motorcycle accident and could not train me anymore. I had to decide whether to give up or continue. I knew I couldn’t do it alone, so I joined a gym so that I could be accountable. That is the only way this works.

For added accountability, I record all my workouts and post them on social media. If a 300+ pound man can do burpees, anyone can.

You Don’t Have To Feel Helpless Forever

I struggled with food. You may be struggling with something else. I don’t know what you’re going through.

My advice is to go public. When you go public, you take the power away. Food does not define me anymore.

I know the feeling of hopelessness, and you don’t have to feel that way forever.

Related: Christian Accountability: Getting It Right, Getting It Wrong, and Knowing the Difference

John Evans • I’m incredibly passionate about functional fitness because it saved my life. I’ve lost a total of 235 lbs. and I’m continuing to lose weight thanks to proper nutrition and functional fitness. I’m such a believer that I got my certification to train others in functional fitness and now I want to help you function better in life.

I don’t have a magic pill. I specialize in hard work and discipline, and let’s be honest–that’s what you need.