Changing Your Media Intake to Change Your Attitude

Changing Your Media Diet to Change Your Attitude

I almost rage-quit a video game recently. Not because it was too hard, or crashed too horribly (the usual reasons gamers quit particular games)—no, it was because of the cutscenes.

This particular game was the sequel to an adventure role-playing game (think Final Fantasy). The original game was focused around the usual trope of saving the world, with the occasional joke about which character had a crush on which other character thrown in for character development. The sequel, on the other hand, opened with the mother of the 19-year-old protagonist asking him when he was going to get married. Five hours in, a third of the cutscenes had to do with the actual save-the-world-again plot and the other two thirds were about the hero’s love life, the hero’s younger brother’s love life, or the 40-year-old mentor’s long-dead love.

For a thirty-some year old single, it was a bit much. I turned the game off for the day and finished reading The Yearling instead. 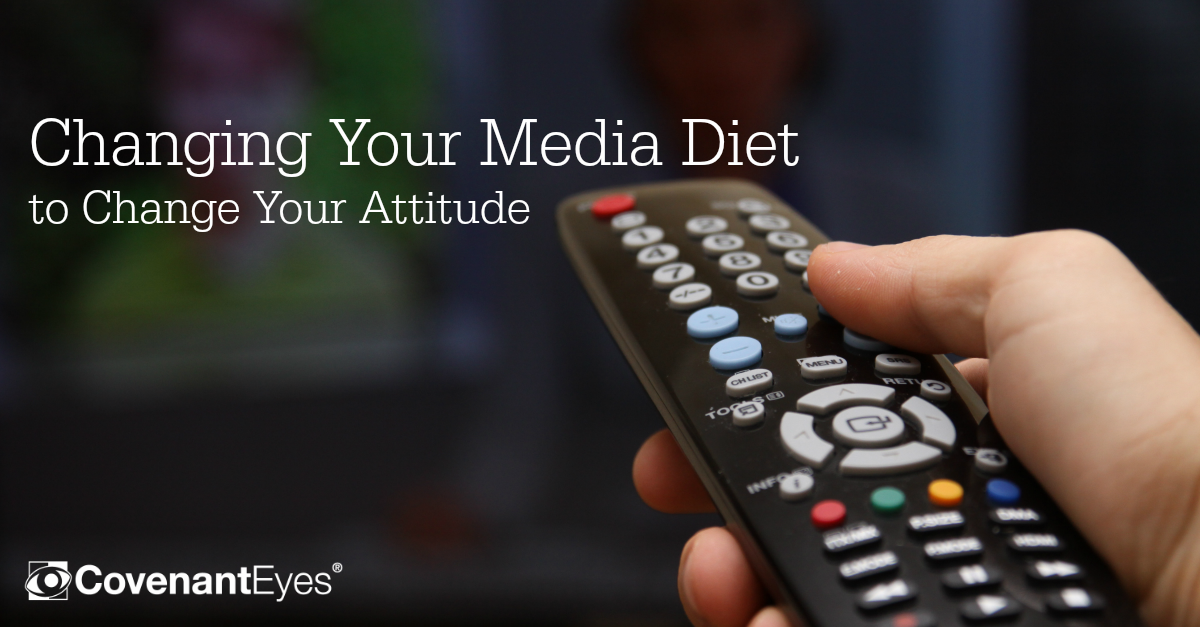 The truth is, other than too many clichés about needing to get married Right Now, that particular game was relatively benign. Most people—singles in particular—hear much worse messages every day.

Take, for example, Pixels, Adam Sandler’s most recent box office flop. When three schlubby men and one token Hot Woman team up to fight an alien invasion, the men are rewarded (or at least promised) hot women as literal trophies…and the main female protagonist is herself essentially one of the prizes. Clearly, the moral is that every man deserves an attractive lady by his side, even if one of his biggest life accomplishments was coming in second in a Pac-Man tournament 30 years earlier.

Most music isn’t much better. At the moment, OMI’s “Cheerleader” is at the top of Billboard’s Hot 100. In some ways, it’s an uplifting song—the singer is grateful for his girlfriend and promises to be faithful to her. On closer examination, though, the song fails to depict a healthy, strong, male-female relationship. Here’s the woman’s role, as presented in the song:

Yes, this is a three-minute song. No, I don’t expect it to contain the same nuanced evaluations of relationships as are present in, say, Anna Karenina. But it’s awfully one-sided, especially when a simple reversal of the chorus could have shown a much better picture of a truly loving relationship. Imagine if, instead of the woman always being the cheerleader, the last chorus were reversed: “Oh, I want to be her cheerleader / Be always right there next to her.”

Now, certainly there is a place for mindless entertainment. In fact, when “Cheerleader” comes on the radio, rejoice that it celebrates fidelity and long-term commitment. But the problem is, these examples are the rule of most entertainment options these days, not the exceptions. Movies, TV, music, magazines, billboards, and yes, even my beloved video games all glorify sexual promiscuity over virginity; they all promote relationships (even unhealthy ones) over being alone; and they play selfish acts in relationships as humorous quirks instead of marriage-harming behaviors.

How Lies Affect Your Thinking

Shortly before the movie 50 Shades of Gray came out, a fellow Covenant Eyes employee got into a debate with her sister about whether she should see the movie. To us here at Covenant Eyes, it’s poorly-written smut at best and outright pornographic at worst; to my coworker’s sister, though, it’s a compelling story.

Debates about its relative literary merits aside, my coworker refuses and will continue to refuse to watch 50 Shades of Gray or its already-ordered sequels. As she explained, “I don’t want either the sex or the violence in my head. I don’t want them to change who I am.”

My coworker was exactly right, of course. She was echoing what Paul wrote in 1 Corinthians 10:31: “So, whether you eat or drink, or whatever you do, do all to the glory of God.”

Porn is obvious, but other media choices can have more subtle impacts as well. Let’s take video games for a minute, as an example that’s near and dear to my own heart. Obviously, I’m not going to suddenly say that all video games are evil. There are, however, certain lines that I’ve had to draw for my own mental health. I enjoy first-person shooters, but if I’ve been playing too many of them I find I’m more likely to react to frustrating situations in anger or swear (usually in my head, at least, and not out loud). If I’m feeling particularly self-aware, I’ll take a break from video games for a bit. Usually I don’t realize the impact on my mood until I’m halfway through the next game. I’ve tried to balance the violent games with puzzle-based ones, but I suspect they wear at me more than even I realize.

Whatever media messages you consume regularly are eventually normalized. Watch 50 Shades of Grey on repeat, and you’ll normalize consensual sexual violence. Watch Adam Sandler movies, and you’ll normalize crude and misogynistic jokes. Play too many violent video games and you’ll normalize anger as an acceptable response. Everyone will have a different threshold for what they consider morally acceptable—a friend and I already have plans to watch Pixels during a bad movie night for the express purpose of heckling it, for example—so my point is not to impose legalism where we have freedom. But it is important to be mindful of how your entertainment choices may be influencing your behaviors.

The corollary to ditching bad entertainment options is to surround yourself with good ones. After all, if negative examples in the media can change your acceptance of social behaviors, then positive examples in the media should help reset them. By the way, ratings are not always the best indicators of positive messages. The misogynistic Pixels is rated PG-13. Meanwhile, Mad Max: Fury Road (rated R) fights against harems, digital or otherwise, and Inside Out (rated PG) values the roles of parents and puts women in leadership roles.

There’s a biblical basis for this. Saul, the first king of Israel, suffered from literally demonic bouts of depression. When the then-unknown David came and played the lyre for the king, “Saul would be relieved and feel better, and the evil spirit would depart from him” (1 Samuel 16:23).

Or, as Drew Holcomb and the Neighbors sings:

Songs and movies have helped me on my own journey. They have helped me name my emotions and needs; they have helped me weep when tears wouldn’t otherwise come. There have been seasons where I’ve put a particular song or album on repeat, because that particular music has helped me channel and interpret my circumstances. In some cases, the songs have reminded me that my own struggles aren’t unique.

Over the years, some favorites have made it onto mix CDs and playlists, often revolving around some form of life change. One such playlist centered around my rocky transition from grad school to the professional world; nearly all the songs included a theme of uncertainty and instability (such as Ben Folds’ “You Don’t Know Me”), but the CD ended with Switchfoot’s “This is Home” from the Prince Caspian soundtrack; every time I listened to it, it brought me on a musical journey from doubt and fear to faith and belonging—a journey that roughly mirrored my own, and led me to deeper trust in God.

The trick is to actually pay attention to the message of the music you listen to or the movies and TV shows you watch (you internalize them, even if you don’t actively listen to them). Then surround yourself primarily with the messages you want to hear. Let the music or the movies or the TV shows or the video games reflect your own self-doubt, yes; but let them lead you to a place of hope.