Why Your Favorite Social Sites Are Stressing You Out

We all have that friend. You know, the crafty one with a label maker and a house that looks like Pinterest exploded in it? Yeah, her.

As a testament to Pinterest’s massive growth, it appears that a lot of us want to be just like her. We’re flocking to the wildly popular site in hopes of making our houses more beautiful (on a budget!), whipping up awesome crafts for our kids, and preparing meals in Mason jars, one pin at a time.

But what comes as a surprise to many women is how they feel after they’ve lost themselves for hours on the site. It’s not very good. 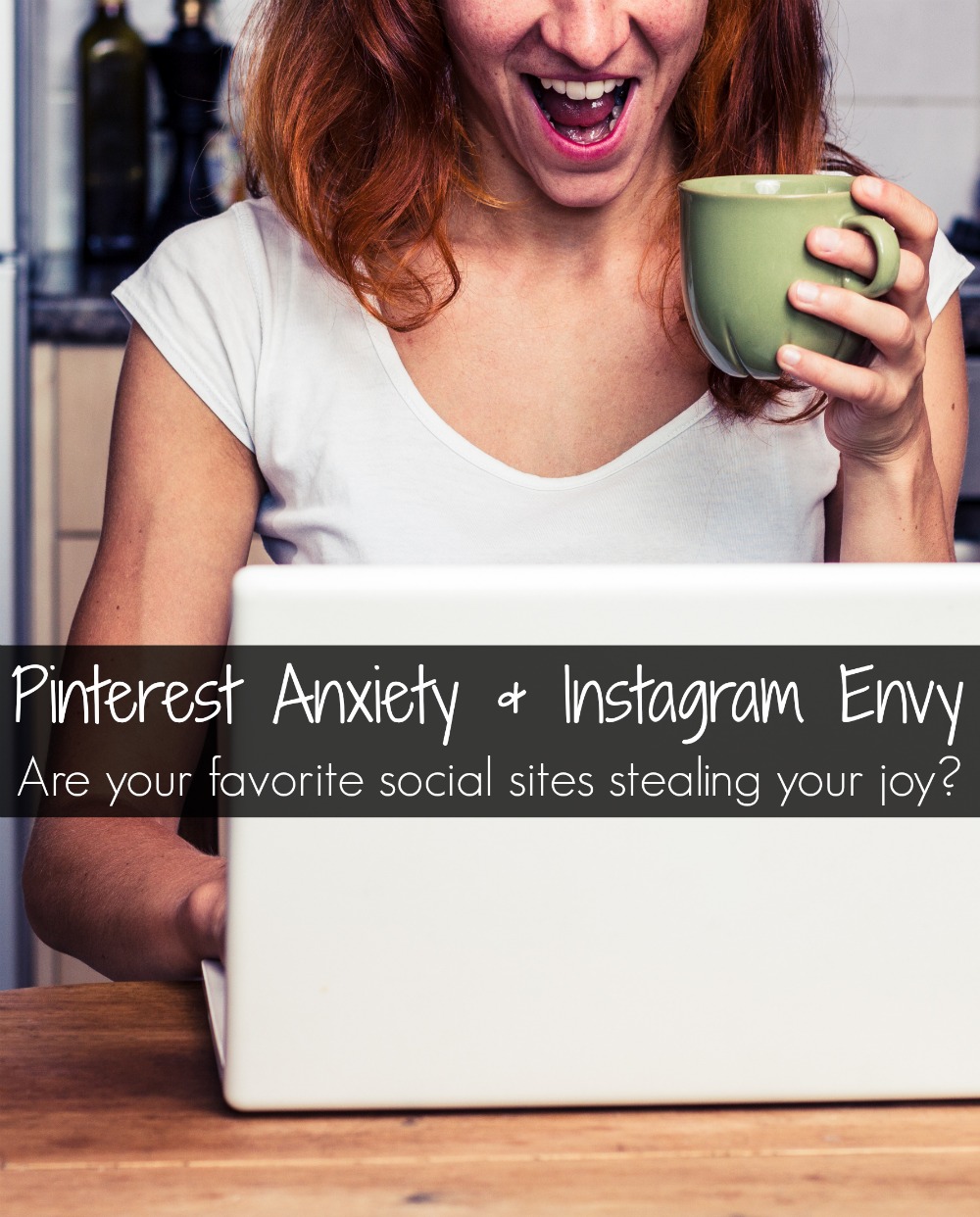 In a TODAY Moms survey of 7,000 U.S. mothers, 42% of women admitted to feeling Pinterest stress. In the same survey, one in four women said that the pressure they put on themselves to be perfect is a top cause of stress. These women rated their overall stress level at an 8.5 out of 10.

Pinterest “tricks you into thinking that everyone is baking their own bread,” said Jenna Andersen, the blogger behind Pinterest Fail, a hilarious site that exhibits Pinterest-inspired recipes and crafts that go very wrong.

Women are coming away feeling frustrated, inadequate, and stressed when they cannot recreate the idllyic images and atmospheres that Pinterest showcases and that everyone else seems to master. It can be obsessive for many women, not to mention tiring, as many admit to staying up until the wee hours of the night searching for the perfect “this” or “that,” also known as “Pinsomnia.”

“We have a hard time enjoying our own experiences because we feel it’s not worthy of this invisible judge. It’s so easy to get depressed. You start to feel like your entire life has to be like a magazine all the time,” Andersen told TODAY.

Not since the 1950s have women devoted so much attention to the “minutiae of kitchen towels, bathroom grouting and indoor plant trends,” shares Adriana Barton in her article that explores the link between self-image and our growing obsession in fixing up our houses.

Not coincidently, Home Decor is one of the most popular categories on Pinterest. Other popular social sharing sites, like Houzz.com provide additional digital playgrounds for endless possibilities of “perfecting” our surroundings.

Joyce Davidson, an associate professor at Queen’s University, has studied how women express themselves through their home environments. She explains in Barton’s article that the more social pressures women face, “the more likely they are to actively try to control the things they can, like the body or the home.”

Like body image, one’s home has become a measurement of successes and failings and it’s become a full-blown obsession for North American women.

Davison adds, “The idea is that perfection might be more easily attainable if you buy the right lampshade or vase, but you’re never going to achieve the right-shaped [butt].”

Is It Time For You To “Unfriend” Social Media?

Let’s be honest, as women, we’re really guilty of making comparisons. Even if we’re not actively trying to, it’s natural to see what others have and subconsciously match it up against our current situation. Facebook and other popular social media platforms make it too easy to constantly log in to others’ lives and find dissatisfaction with our own.

In a 2013 study, two German universities conducted a joint study about envy on Facebook and were surprised at just how rampant it is on the social network.

“We were surprised by how many people have a negative experience from Facebook with envy leaving them feeling lonely, frustrated or angry,” said researcher Hanna Krasnova from the Institute of Information Systems at Berlin’s Humboldt University.

These same researchers found vacation photos were the biggest cause of resentment, with more than half of envy incidents triggered by holiday pics on Facebook. The second most common cause of envy was from social interaction, as users would compare things like the number of birthday greetings they received to those of their Facebook friends and how many “likes” or comments were made on photos and postings.

Similarly, in a study from the University of Salford in the UK, participants said they felt that social networks like Facebook and Twitter made their lives worse. More specifically, they noted that their self-esteem suffered when they compared their own accomplishments to those of their online friends.

According to psychotherapist Sherrie Campbell, social media can give us a false sense of belonging and connecting that is not built on real-life exchanges. This makes it increasingly easy to lose oneself to cyberspace connections and give them more weight than they deserve.

“When we look to social media, we end up comparing ourselves to what we see which can lower our self-esteem. On social media, everyone’s life looks perfect but you’re only seeing a snapshot of reality. We can be whoever we want to be in social media and if we take what we see literally then it’s possible that we can feel we are falling short in life,” Campbell told newssite AlterNet.

An article by Relevant Magazine about “Instagram Envy” further puts this into perspective:

The danger of the Internet is that it’s very very easy to tell partial truths—to show the fabulous meal but not the mess to clean up afterward. To display the smiling couple-shot, but not the fight you had three days ago. To offer up the sparkly milestones but not the spiraling meltdowns.

Because community—the rich kind, the transforming kind, the valuable and difficult kind—doesn’t happen in partial truths and well-edited photo collections on Instagram. Community happens when we hear each other’s actual voices, when we enter one another’s actual homes, with actual messes, around actual tables telling stories that ramble on beyond 140 pithy characters.

While your favorite sites are not to be made out as villains, when they start to make you feel a host of not-so-pretty ways, it’s worthy of stepping back and seriously assessing the hold social content has on our lives.

As we’re in the thick of the holiday season, it’s prime time for pinboards everywhere to light up with searches in hopes of making Christmas just a little more sparkly. This year, instead of spending too much time searching for those cute reindeer cookies (that you know aren’t going to turn out anyway), why not use grandma’s famous recipe that has stood the test of time and was lovingly written on an actual recipe card? Remember those?

Maybe it’s time to take a timeout from trying to duplicate pixellated dreams and competing with what others have and live our messy, unique, and imperfect lives.

Eat macaroni (from a box) for dinner…make a snowman with your kids…build a fort in the living room…sit at the table and actually talk. Your family does not want perfection—they just want you.

Time. Such a precious commodity we don’t get back from a computer screen. Let’s not waste it in what could be, for what is. This Christmas, take a break, breathe, and have real and unique interactions with those you love.