iForget: A Look At Digital Dementia, Excessive Screen Time and Why Your Kids Are At Risk

If you’re a parent with a teenager in the house, you’re not alone if you feel they’ve completely lost their mind at times. And quite possibly, they might be, but not for the reasons you may be thinking.

It’s called “digital dementia,” and it’s a disturbing new condition that has researchers and doctors taking note. The term was coined by a top German neuroscientist Manfred Spitzer to describe how the overuse of digital technology is resulting in the breakdown of cognitive abilities in a way that is more commonly seen in people who have suffered a head injury or psychiatric illness.

It was really South Korean doctors who were the first to describe this phenomenon, which Spitzer later dubbed. South Korea has one the world’s greatest populations of Internet users. It also boasts a high percentage of smartphone users: over 67% of Koreans over the age of 16 have them, the highest anywhere in the world outside of northern Europe. It is predicted that by 2017, about 85 percent of Koreans will have smart phones, according to The Wall Street Journal. 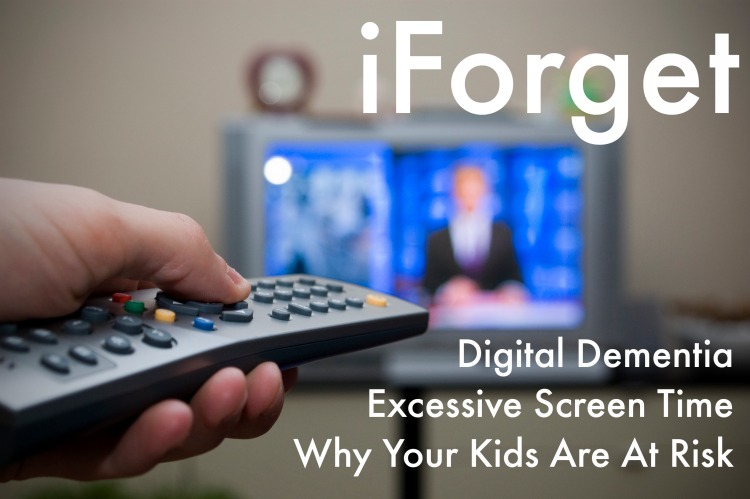 Where it all starts: the lonely right side of the brain

When there is an excessive use of digital technology, a lopsided development of the brain can occur, increasing the risk of digital demetia. According to Dr. Byun Gi-won, who runs the Balance Brain Center in Seoul, overuse of smartphones and game devices hampers the balanced development of the brain. He adds that heavy users are likely to develop the left side of their brains, leaving the right side untapped or under-developed.

“Since smartphone use mostly stimulates the left side of the brain, the right side, which is linked with concentration, eventually degenerates, reducing attention and memory span.”

Because the right side of the brain is used for concentration, there’s a very real potential that many will have trouble with attention and memory spans. This potentially leads to the early onset of dementia in up to 15 percent of cases.

Technology truly has changed the way we store knowledge. While it’s causing issues with overall retention, it’s also evolving how specifically we’re retaining knowledge as well. A study by Science Magazine indicated that people are now better at remembering where information can be accessed (think Google and Wiki) rather than what the actual information is.

Participants of the study were asked to remember trivia facts as well as which of five corresponding folders the answers were stored in. Interestingly, the participants were able to remember the folder locations better than the actual facts themselves. It seems that instead of storing knowledge, we are now more likely to store the “how” and “where” of getting to it.

In practical application, we see this everyday. A majority of people no longer memorize phone numbers because all they have to do is push a button and dial. Students no longer have to take notes in class: they just snap a picture of the notes on the whiteboard with their smartphones.

In an interview with Fox News.com on the issue of digital dementia, Dr. Carolyn Brockington shares, “The problem is that we’re using technology, which is good, but we’re overusing in many ways. We’re not relying on our brains to sort of retrieve the information when we need it.”

So how do you think your child’s right side of the brain is fairing?

What else is going on in that head of theirs?

Well, ideally, a lot. But as a society that continues to be increasingly plugged-in to digital technology, at increasingly younger ages, it’s imperative to understand that the developing brains of children are being compromised by too much screen time.

In a recent article published in Psychology Today by Victoria L. Dunckley, M.D., neuroimagery of the the brain was examined to show how excessive screen time affects the brain. Using the findings of several researchers, Dr. Dunckley explains how the various parts of the brain were changed:

Gray matter atrophy: Multiple studies have shown atrophy (shrinkage or loss of tissue volume) in gray matter areas (where “processing” occurs) in Internet/gaming addiction (Zhou 2011, Yuan 2011, Weng 2013,and Weng 2012). Areas affected included the important frontal lobe, which governs executive functions, such as planning, prioritizing, organizing, and impulse control (“getting stuff done”). Volume loss was also seen in the striatum, which is involved in reward pathways and the suppression of socially unacceptable impulses. An additional finding was damage to the insula, which is involved in our capacity to develop empathy and compassion for others and our ability to integrate physical signals with emotion.

Compromised white matter integrity: Research demonstrated a loss of integrity to the brain’s white matter (Lin 2012, Yuan 2011, Hong 2013 and Weng 2013). “Spotty” white matter translates into loss of communication within the brain, including connections to and from various lobes of the same hemisphere, links between the right and left hemispheres, and paths between higher (cognitive) and lower (emotional and survival) brain centers. White matter also connects networks from the brain to the body and vice versa. Interrupted connections may slow down signals, “short-circuit” them, or cause them to be erratic (“misfire”).

Cravings impaired dopamine function: Research on video games have shown dopamine (implicated in reward processing and addiction) is released during gaming (Koepp 1998 and Kuhn 2011) and that craving or urges for gaming produces brain changes that are similar to drug cravings (Ko 2009, Han 2011). Other findings in Internet addiction include reduced numbers of dopamine receptors and transporters (Kim 2011 and Hou 2012).

In summary: Excessive screen time can lead to general cognitive “slowness,” cravings for more screen time (and a restlessness without it), and a diminished ability for the brain to plan, prioritize, organize, fight impulses, and develop empathy.

While it’s a lot of science to digest, it’s important to understand that the time your kids are spending in front of a screen is truly doing something in their brains. Dr. Aric Sigman, shares that by the age of seven, the average child will have spent a full year of 24-hour days watching recreational screen media. That’s too much media, too young. Not only is there concern on the cognitive aspects of the brain, but also the addictive nature of excessive screen time.

Dr. Sigman warns about the constant dopamine release in young minds. “There are concerns among neuroscientists that this dopamine being produced every single day for many years—through for example playing computer games—may change the reward circuitry in a child’s brain and make them more dependent on screen media.”

While the research on digital dementia is fairly new and overall research on digital dangers will continue to evolve with future findings, it definitely provides substance for serious consideration. What will be the long-term effects on this generation? Will the digital habits of our children today reap serious issues later?

Parents need to dig a little deeper and look at how we’re allowing our children’s brains to be “built.” It’s our responsibility to stay educated and not sit on the sidelines and let a digital gadget potentially rewire our kid’s mind.

Protect Those Noggins: What You Can Do

As a parent, hopefully at some point you’ll question how much screen time your child should have. Whether you’ve got little ones who are still a few years off from getting online, to those who’ve been a bit too lenient with their teenager’s tech usage, here’s some beginning steps you can start taking now toward a healthy balance in your family.

Start early, set the standard. It can be challenging at times, but start early by establishing a set of rules for computer and gadget usage. Your children will be more apt to roll with the specific rules if it’s all they’ve ever known.

Prepare to be unpopular. If you’ve been lax in doing the first point, there’s still time, but you’ll be up against some resistance from your kids. Stay the course, you’re the parent and you want them to have the brightest future as possible. Think of the big picture.

Stay current and have conversations. While a lot of kids will not want to understand the “science” that motivates your concerns, by staying up on what your kids are interested in tech-wise and discussing current events featuring tech stories with them, you’ll be able to better engage with them and get more buy-in. This allows you to bring in your concerns and have real conversations about them.

Get back to the basics. It can be hard not to cave in to your child’s requests for more tech time, especially when you’re busy and it would serve as a good babysitter. But there are activities such as reading books, playing outside, taking a walk, coloring,drawing, board games…you get the picture. Just say no.