Slaves: A Documentary Addresses Both Sex Addiction and Trafficking 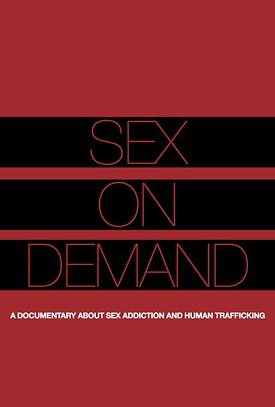 There are millions of sex slaves in the world today. Millions. Anywhere from 14,000 to 17,000 individual are transported to the United States every year, most of them for the purposes of sexual servitude and forced prostitution. Anywhere from 100,000 to 300,000 Americans are undergoing the same slavery, many of them “throw away” kids who are never reported to the authorities. Millions more are exploited overseas, often in popular tourist destinations in Mexico, the Caribbean, Brazil, the Netherlands, India, Cambodia, and other places.

But there is another kind of sexual slavery that is rampant in America today: sex addiction—an estimated 30 million people. These two forms of sex slavery—sex addiction and sex trafficking—collide in a most sordid way as addicts find themselves as buyers in what is the second most lucrative criminal industry in the world (behind the sale of drugs).

This is the topic the new documentary, Sex on Demand, seeks to address.

When it comes to fighting the injustice of sex trafficking, the criminals are the pimps and the johns. The prostitutes are the victims. Because of this, it’s a hard sell telling people that, in a very real sense, the buyers are enduring their own kind of slavery.

I’m sympathetic to Sex on Demand’s message because I believe sex addiction is a real moral and medical crisis today, and yet I can’t help but feel a hesitation calling sex addicts “victims” in the same way prostituted women are victims. The very word “addiction” is, for some people, too disease-oriented. Saying someone is an addict, for some, is tantamount to saying the person has a disease which they are not responsible.

But Sex on Demand does a wonderful job making clear just how and in what way sex addicts are suffering and yet still responsible for their actions.

About Sex on Demand

Sex on Demand is a 70-minute film divided into 10 sections (ranging from four to 13 minutes long).

The documentary is a follow-up piece by Bella Veritas Productions to their short film 10 Seconds. When seen together, the expressive film and the documentary offer powerful education to anyone who wants to learn more about the darkness of sex addiction and how it impacts the sex trade.

10 Strengths of Sex on Demand

There are many more than 10 strengths, but these stood out to me the most.

1. Combined with the companion piece, 10 Seconds, these films are likely to grab anyone’s attention. 10 Seconds offers a dramatic introduction to the topic for someone who isn’t prepared to sit down and watch a documentary. 10 Seconds is emotionally gripping and gives viewers snapshots of the life of a sex addict and the darkest days of his addiction.

2. Sex on Demand does a great job spelling out the different levels of sexual addiction. While making it clear that sexual addiction is progressive, not all or even most sex addicts are dangerous people who are likely to engage in illegal activity.

3. Sex on Demand does an excellent job describing the marks of sexual addiction. Sex addiction is the result of having a destructive relationship with sex. Far more than just a desire for sex, sex addiction is an obsession, a fixation. Sex addiction involves inordinate preoccupation with the next sexual experience, great secrecy and dishonesty, increasing negative consequences, and an inability to stop acting out despite those consequences. All of these factors are described with precision in the film.

4. Sex on Demand includes some very gripping stories. Individuals who have experienced sex addiction are interviewed, as well as others who work with victims of trafficking. The stories are hard-hitting and sometimes shocking—sure to grab you.

5. Sex on Demand gives viewers a simple understanding of how sex addiction is rooted in brain chemistry. With clear visuals and simplified explanations, experts talk about the neurochemical cocktail involved in the development of a sex addiction.

7. Sex on Demand stresses the vital importance of honesty and confession. Nate Larkin wisely says (and is echoed by many others), “Addiction is a very lonely state. It requires a determination to do whatever is necessary to get your life back. That means asking and answering difficult questions. It means engaging in real conversation, forming real relationships with real people, on the basis of a stark and courageous honesty.”

9. Sex on Demand does not leave female addicts out of the picture. Too often men are in the spotlight when it comes to sex addiction, but women comprise about a third of the estimated numbers of addicts. The documentary does a fine job spelling out some of the common differences and similarities between male and female sex addiction.

10. The documentary offers very practical ideas about getting involved with the issue of sex trafficking. When people’s hearts are stirred to do something about sex trafficking, often they have a very glamorized or romanticized picture of what that will involve. Sex on Demand gives men and women a realistic picture of how anyone can be involved in the cause, giving both practical ideas and critical information.

Limitations of Sex on Demand

As a writer, I get criticized all the time for not covering every possible angle in every article I write—there’s always a critic who thinks I’m overlooking some major piece of the puzzle because I’ve written a hyper-focused article about a niche topic. I understand that every informative piece will be limited in its scope, and there’s absolutely nothing wrong with that.

That said, here are some areas where, rightly or wrongly, Sex on Demand is limited.

1. God was not a main character in the film. The intended audience is purposefully broad. God is mentioned a couple times in the personal testimonies. Once it is stated that recovery “is a spiritual journey of healing for a spiritual disease.” In the film 10 Seconds the main character is a church-going man, sending the clear message that even Christians can be ensnared. While the film doesn’t broach the spiritual subject in great detail, my prayer is that sex addicts will find God in communities of recovery nonetheless.

2. The concept of shame needed clearer explanation. “Toxic shame” is a key theme in this film—as it should be when discussing sex addiction. The film follows the common line of reasoning that shame over one’s behavior turns toxic when a person begins to believe not just that their actions or desires are bad but when that person begins to believe he or she is bad. I don’t believe this is the best way to frame the concept of shame (see my article: “Guilt vs. Shame: Why Definitions Matter”).

Aside from this, the film really piqued my interest when Ken Graham, a licensed counselor, said that a common factor in the development of sex addiction is coming from either a shame-based or shameless family system. A shame-based family is one in which feelings and desires are not discussed, including sexual desires. This is something we at Covenant Eyes have noticed about sex addicts as well.

Nothing more was said about what a “shameless” family system looks like, and this would have been very helpful in the discussion about shame.

That said, the film does an excellent job avoiding some of the pitfalls of the co-addiction model. Sex on Demand states outright that spouses of sex addicts didn’t cause their partners addiction, can’t cure the addiction, and can’t control the addiction. The film strongly states that it is often partners of sex addicts that are the most common catalyst for addicts getting help. Nate Larkin testifies, “It was my wife’s kindness in issuing that ultimatum that drove me out of my private search for a private solution to my private problem, got me past the shame, made me desperate enough to seek help.”

4. Both 10 Seconds and Sex on Demand display some disturbing images. This is not a criticism for the filmmakers but a necessary disclaimer for the viewer. The film is about a dark and sinister topic, charged with sexual themes. I’ve seen very few films about this topic that are both gripping and devoid of any and all potentially titillating images. I’ve come to learn that seemingly anything—and I mean anything—can be a trigger for true sex addicts. Before showing this to a group, please preview the film to see if you believe it is appropriate.