In Greek mythology they are called the Sirens, mythical seductresses of the sea. These creatures of great beauty sit in the flowery meadow on small, rocky islands in the Mediterranean. The Sirens are divine beings with the wings of birds and voices that can enchant any sailor. Ancient sources describe their “siren song”—a beautiful music that compulsively lures sailors toward the island, only to have their ships capsize on the rocks.

This is, perhaps, one of the best analogies I can give to describe the lure of pornography and its addictive nature. We don’t intend to crash the ship of our lives on the rocky shore, but the siren song calls to us. For many people, once pornography sinks its hooks into us, we forever feel the draw of it. It is like a compulsion, a disease in our blood that never seems to go away. 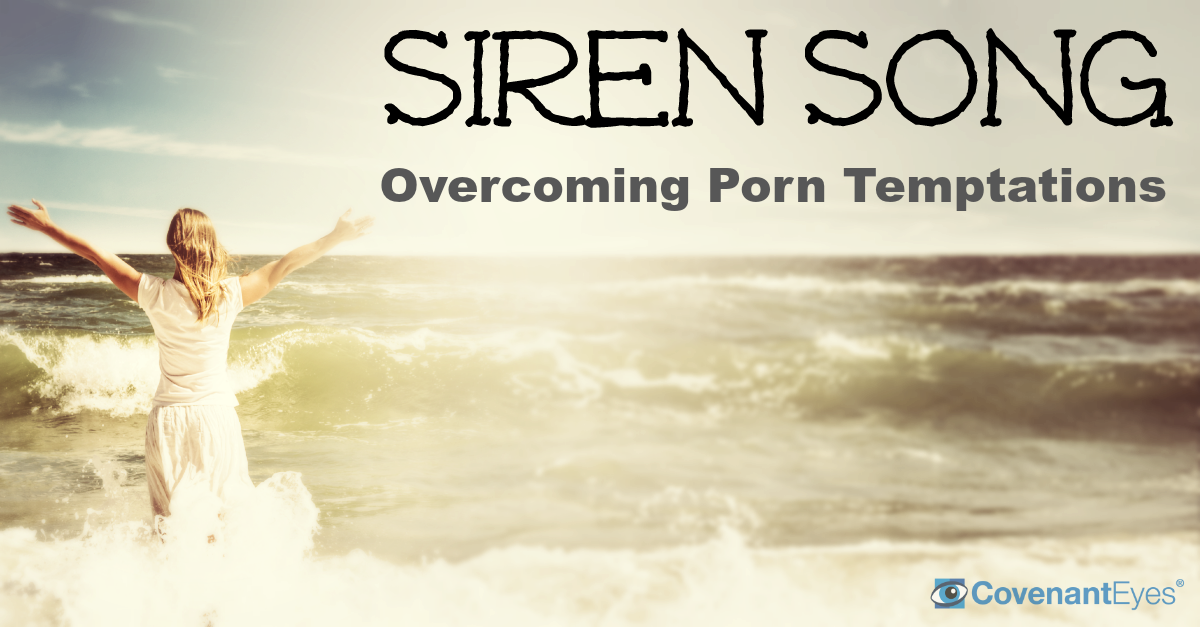 How did ancient seafarers sail by the Sirens without being overcome by their songs? Two ancient myths give us a glimpse…

Odysseus: Bind Me to the Mast

Homer’s Odyssey tells of the adventures of Odysseus, one of the champions of the Trojan War. In the Odyssey he is counseled by a goddess to beware of the Sirens. She warns him that if he should come within range of their sweet song, they will draw him to his death. Beware, she says, all around the island there is a great heap of dead men’s bones, tokens of the Sirens’ power.

At her insistence Odysseus plugs the ears of his fellow sailors with wax so they will be unaffected by the seductive music. But because he wants the pleasure of hearing the Sirens, he commands his men to bind him half-way up mast of the ship, standing upright. He tells them further, “If I beg and pray you to set me free, then bind me more tightly still.”

As Odysseus’ ship sails within an earshot of the islands, suddenly the wind falls into a dead calm. The Sirens see Odysseus coming and begin with their singing. “Come here,” they sing, “and listen to our two voices. No one ever sailed past us without staying to hear the enchanting sweetness of our song.” In their song they promise Odysseus divine foreknowledge of all that the gods and men will ever do.

Odysseus is overcome by the song and demands that he be set free, but his men bind him with stronger ropes until they are out of the Sirens’ range. Disaster is averted.

Apollonius of Rhodes also writes about the Sirens in The Voyage of the Argo, the tale of Jason’s voyage to find the Golden Fleece. A centaur warns Jason about the Sirens, and sure enough, the sailors encounter them. As a fresh breeze floats over their ship they see the island. The Sirens’ watchful eyes spot Jason’s ship and begin to sing. The sailors are overcome with desire and are ready to cast their ropes from the boat to the shore.

Suddenly one of the heroes on board, the legendary musician Orpheus, pulls out his stringed lyre and begins to play. His music overwhelms the voice of the Sirens, as the sailors ears are filled with Orpheus’ tune, and the ship sails by the island without incident.

When it comes to accountability, what sort of people are on board your ship? When you come within range of the siren song of lust, what kind of accountability will you rely on? Ideally, we need both.

On one hand you might be more like Odysseus: accountability is about finding friends who will bind you with stronger ropes. You want others who will help you set personal boundaries and rules for yourself. You want someone to hold you to task to your goals. You want someone you can call in the middle of the night in the midst of a tempting situation. These people hold you accountable to your behavior.

On other hand you might be more like Jason: you want people like Orpheus who can help you get to the heart of your internal motivations. These are men and women who know that the only way to break the spell of sin is with a greater spell, a more enchanting song. These are friends who hold you accountable to believing God’s promises, which are more delightful than anything pornography can deliver. These people hold you accountable to your heartfelt beliefs.

In actuality, we need both in our accountability relationships. It is wise to fight the battle on two fronts: behaviors and beliefs.

Strong Ropes and a Ten-Stringed Lyre

On one front, we need friends who can help us develop external roadblocks that keep us from lustful behaviors when temptation is fierce.. Good accountability partners are people who ask you about the temptations you face and what your exit strategies should be, who help you identify your triggers. They bring the “strong ropes” to bind you when you don’t have the moral strength to bind yourself.

CS Lewis reminds us, in the long run, the only thing that overcomes a spell is a stronger spell:

The New Testament has lots to say about self-denial, but not about self-denial as an end in itself. We are told to deny ourselves and to take up our crosses in order that we may follow Christ; and nearly every description of what we shall ultimately find if we do so contains an appeal to desire…Indeed, if we consider the unblushing promises of reward and the staggering nature of the rewards promised in the Gospels, it would seem that Our Lord finds our desires not too strong, but too weak. We are half-hearted creatures, fooling about with drink and sex and ambition when infinite joy is offered us, like an ignorant child who wants to go on making mud pies in a slum because he cannot imagine what is meant by the offer of a holiday at the sea. We are far too easily pleased.

Do you think I am trying to weave a spell? Perhaps I am; but remember your fairy tales. Spells are used for breaking enchantments as well as for inducing them. And you and I have need of the strongest spell that can be found to wake us from the evil enchantment of worldliness…”

These myths and fairly tales reveal what we have always known to be true: we need others on board our ship.