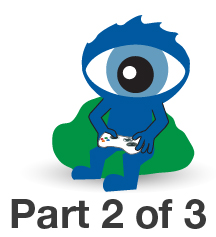 “Online interactions not rated by the ESRB.”

Perhaps you’ve seen this notice on video games, but have you ever stopped to ponder what it actually means? After all, a game is a game, isn’t it? What makes an online component of a video game unrateable?

Last month we discussed games and their content generally. This month we’ll take a closer look at what it means when console games use the Internet.

Internet use on all three consoles, Wii, XBOX 360, and PlayStation 3, is almost inescapable. All three consoles push you toward creating a personal username, which is handy for tracking in-game achievements. While you’re not necessarily required to tie these logins to the Internet, you are strongly encouraged to do so. The PlayStation 3 and Wii have free Internet capabilities, including multiplayer gaming and Netflix streaming. These features are available on the XBOX 360 for a monthly fee, though chat is available for free. With the right accessories, the 360 and PS3 both allow for video and voice chats as well.

Handheld devices also have online capabilities. The Nintendo 3DS has passive online sharing integrated into the hardware itself. With StreetPass, the 3DS automatically shares certain data with any other 3DS within 90 feet. This includes high scores and custom game information. Two minigames are actually reliant upon gathering “Miis” (player created avatars) from other 3DS owners. Other Nintendo DS models use PictoChat, which allows users to send not only text messages but to actually draw images using their stylus and send them to other users.

Still other games allow you to upload or download player-generated content. This is most common in simulation or world-building games such as The Sims 3. For example, one player created a homeless family and maintained a blog about their misadventures, and then allowed other players to download these characters to let them loose in their own towns.

The pièce de résistance to Internet-enabled consoles is the ability to play multiplayer games with family, friends, or even complete strangers. This may sound unappealing, but playing against (or with) a real person provides a more interesting experience, as live players are usually more intelligent or less predictable than the system.

Multiplayer games may be cooperative or competitive. Co-op games (like Portal 2) focus on working with another player to complete an objective, whether solving a puzzle or defeating an enemy.

Competitive games come in many varieties. Some involve competing to complete an objective first or with the best score. Mario Kart Wii, for example, is competitive racing. Competitive board-to-console games like Catan or Carcassonne offer limited interactions with opponents. Your main objective is to have the highest score by the end of the game, and any impact you have on your competitor’s strategy will likely be an incidental benefit (like winning a bid for a limited resource). Other games, like Civilization V, offer more direct interactions against other players.

Perhaps the most common type of competitive game is considered player vs. player (PVP). In this mode, you fight directly against other players, frequently in timed matches. These games are often first-person shooters, in which you directly shoot your competitors before they can shoot you. The Halo series is a popular example.

Many games will incorporate both co-op and competitive elements. In Team Fortress 2, players form two teams that compete against each other to complete objectives (one mode is capture the flag). Massive Multiplayer Online games (MMOs) also blend co-op and competitive elements seamlessly. These games will be discussed in more depth in next month’s edition.

So what’s the appeal?

Online components enhance the gaming experience. Some games, like Portal 2 or Ghostbusters: The Video Game, add extra story elements that are only available through co-op (Ghostbusters, in fact, doesn’t even allow offline co-op). These story elements are like an epilogue to an enjoyable book.

When players create content for others to download it can change the game. Available player-created (and therefore free) downloads in The Sims 3 include characters, clothing, buildings, and textures. Did someone create a particularly cool My Little Pony t-shirt? Import it into your own game and dress your own character in it. And as already mentioned, certain games on the Nintendo 3DS are designed to be playable only with StreetPass turned on to gather other players’ Miis.

There’s evidence that multiplayer games may enhance offline relationships as well. Two researchers at Brigham Young University discovered that fathers and daughters playing games together positively impacts the girl (although the correlation drops when the game is rated M). They theorized that the relationship wasn’t present with boys in part because boys were more likely to spend time playing multiplayer with friends. Research by Cheryl Olson supports this: more than 50% of boys responding to a survey reported that they play video games because they “like to compete with others and win,” and she cites one study of boys aged 14-15, which “found that ‘good at computer/video games’ was second only to being ‘fun’ as a desirable trait among one’s in-group members.” Elsewhere, Olson states, “Nick Yee’s surveys of (mostly adult) online game players also found that socializing was an important motivator. They enjoyed being part of a team, helping others, and forging solid relationships. This suggests that video games could play a role in healthy friendships for children and adults.” When you consider that social network users actually have more close friendships and social support than non-users, it’s not unrealistic to extrapolate that for many, playing multiplayer games online with people they know in real life may strengthen those bonds.

Of course, one of the reasons people like playing console multiplayer games is because you aren’t required to coordinate with your friends in advance. Some consoles allow you to quick-form or quick-join a game with complete strangers. With this, you get the benefits of fighting with or against another human instead of the game’s artificial intelligence, but you’re unlikely to interact with that particular person again after the match is over. It’s the gaming equivalent of chatting about the weather with the person seated next to you on the bus.

As with any other Internet-based activity, there are risks with online game interactions. The information shown on gamers’ profiles is actually fairly limited (usually to the gamer’s username, current game, and city), making it less of a risk than some social networking sites, but the risk exists. (Interaction with predators is a much greater risk in MMOs, so we will address that topic in Part 3.)

One of the biggest problems with console multiplayer games, especially when voice chat is enabled, is the prevalence of bad language. This most obviously comes in the form of curse words. In a game’s PVP mode, it’s not at all unusual for one player to swear when killed by another player. Racist and sexist slurs may also be used frequently.

Depending on the nature of the game, the nature of the language may change as well. A game based in violence like Halo is more likely to result in expressions of violence. The multiplayer mode of the sexually-charged Catherine has a somewhat higher probability of resulting in sexually-charged commentary (possibly sexual solicitation, if a male and female play together). Meanwhile, interactions in a family-friendly game like Catan may be limited to good-natured banter, or perhaps simply a chatted “GG” (“Good game”) after a match.

As a general rule, the higher the ESRB rating, the higher the likelihood of bad language and negative interactions. As a parent, you probably don’t want your 12-year-old playing the violent Team Fortress 2, both for the violent content and the higher probability of language inappropriate for their age.

It’s a running joke online that any game that allows players to create their own content will result in the immediate creation of genitalia. While this is perhaps an exaggeration, the risks are still very real. Some players of The Sims 3 have found ways to “enhance” created characters, continually pushing boundaries in female clothing design. Although the majority will be fairly harmless (player-created t-shirts for characters advertising the popular Twilight movies, for example), and although reporting mechanisms for inappropriate content exist, the fact is that such content is almost unavoidable.

As with any device connected to the Internet, there is always a risk of your data online being compromised. This was brought to the forefront in April 2011 when the PlayStation Network was hacked, revealing the data of 77 million users, including credit card information. This is one of a number of networks that have been hacked this year (in fact, members of the same group accused of hacking the PlayStation Network plan to attack Facebook on November 5). As such, this should not be the make-or-break criteria in determining standards for online gameplay. However, it’s worth noting that every Internet-enabled device or online network that you join increases your risk of data or identity theft.

Given the prevalence of Internet-enabled multiplayer console games, what’s a parent to do? It’s easy to decide to forbid your kids from playing multiplayer online at all, but there are more balanced approaches.

Before you set limits for your gaming console, sit down with your kids and write an agreement with them. Be sure to include details about who they can interact with and whether they can use voice features. Microsoft offers a sample pact for you to fill out with your children. Putting it in writing will help you enforce the rules when conflicts arise.

Set parental controls on your consoles.

We mentioned last month that you can block games based off their ESRB ratings. You can also set controls for online gameplay, including who your kids can game with. As a note, the more limits you set, the harder it will be to join an online match.

Monitor what you can.

If you use Covenant Eyes Internet Accountability, check your kids’ Accountability Reports for gaming websites and downloadable content. Not only will you catch any questionable content that your kids have downloaded, you’ll have a better idea of what games your kids like to play. If, for example, you’ve found them watching YouTube videos showing strategies for games like Halo, you can turn it into a conversation about the appropriateness of both the content and the interactions. And if you use the XBOX 360, the Gold Family Membership, you can view reports about your family’s XBOX Live activities. (On a similar topic, before the end of 2011 Android users should look for a brand new Covenant Eyes app that monitors Internet use and the use of apps.)

Play with your kids.

If the research is right, playing games with your kids may actually increase parent-child bonds and improve their overall mental and emotional health outcomes, especially between fathers and daughters. This addresses the other benefits of more game content and more interesting gameplay as well.

Playing games online together also means that parents have a chance to be proactive about dangers like bad language and harmful interactions. As one gamer told me, “Games, online or otherwise, should be treated as any other activity. Parents should be wary of what they’re exposing their children to, regardless of what form/medium it comes in. That said, exposing themselves to it (either before or alongside their children) will help parents learn what’s going on and how best to deal with it, rather than just avoiding it entirely and not knowing what to expect when something negative happens.”

Special thanks to Carl Bussema, John Kowalski, and Tim Tucker for their insights in this article.