Rev. J.E. (Jim) Rose is an ordained minister, licensed professional counselor, and certified clinical supervisor. He is a staff counselor at Covenant Eyes and specializes in sexual addictions and the unique needs of clergy and other professional caregivers. He is also the Director of Nehemiah Ministries, a 160-acre retreat and counseling center in south-central Michigan for pastors and missionaries.

Back in the 70s (when I was a teenager) there was a popular ad campaign for boys by Charles Atlas. If you’re old enough, you remember it:

I was that skinny kid. My ribs showed. I suffered the ignominy of being pushed around by guys bigger (and even smaller) than I at school. I definitely liked the idea of getting big and tough in only 15 minutes a day. I could finally kick sand back at them! I saved my pennies and ordered the course.

It seemed like it would never arrive, but when it did I had as much motivation and enthusiasm as anyone. Charles Atlas himself (yes, there was a real Atlas, though his birth name was Angelano Siciliano) guaranteed I would become a real man. What could go wrong?

The Secret of True Strength

His approach was called “Dynamic Tension.” Apparently, young Charles (er, Angelano) was at the zoo one day, observing the tigers. Pondering their strength and his own weakness, he wondered how they got so powerful. Why were they so feared by others? They didn’t go to the YMCA. They didn’t use barbells. He concluded that it was because they pitted one muscle against another in their own body. This was the beginning of his body-building theory called Dynamic Tension: increasing muscle size through expanding muscle capacity. You didn’t even need a set of barbells. You just needed to pit one muscle group against another and eventually you would look like Charles himself! You could make yourself strong.

You may be wondering how it worked for me. I was going to skip over that part, but since you asked I guess I’ll have to tell you: not particularly well. After several weeks of enthusiastic effort I was still skinny and my ribs still showed. At first I did my routines every day. But it got harder and harder to keep going. So much for 15 minutes a day.

As a licensed counselor, working in the area of sexual addiction, I find a similar pattern in the lives of my clients. Most of them know they’ve got a problem. I methodically lay out the exit before them. But usually they don’t get far down the path before getting discouraged. After a few days or weeks something happens and they fall. “It’s not working!” they conclude. Sometimes they’re angry with me—as if it were my fault. When things didn’t work as easily as they hoped they got discouraged. It’s not the path that’s the problem. It’s the person on it. And that has everything to do with their capacity.

Let’s look at that word “capacity.” It’s important when addressing various forms of mental and behavioral conflict. “Capacity” describes how much we can handle. When I was a skinny teenager my natural strength and condition—muscle capacity—determined how much I could lift and how many reps I could manage. The goal of the Charles Atlas course (other than getting rich off skinny kids like me) was to increase my natural capacity through isometric routines. In terms of mental and emotional health, capacity is also important, and there is much research on how natural capacity affects stress management, mental health, and even addictions.

One author I’ve enjoyed reading on this topic is Dr. Karl Lehman. Lehman is a psychiatrist from the Chicago area specializing in mental health issues. He is also a Christian who is passionately devoted to the spiritual growth (capacity) of his clients. I like that combination. Experts like Lehman say that how we respond to stressful experiences is a reflection of neural and spiritual capacity. This also points to how we can help people in need: increase their capacity.

Not everyone breaks down under the pressures of life. Some are like the kid in the Charles Atlas ads, but others aren’t. Instead of getting pushed around by bullies, they’re able to stand their ground. Why? Because of greater capacity.

For example, a child who grows up in a home impoverished of meaningful parental interaction is more likely to become entangled in destructive activities like pornography and illicit sex. A man whose sexual relationship with his wife is disappointing is more likely to have an affair. Certainly the pornography and adultery are problems to be addressed. They are sins to be confessed. But they’re only the tip of the iceberg. In order to triumph over the sin and destructive patterns in their lives they must ultimately develop greater capacity for handling the stresses and conflicts that triggered their destructive activities in the first place.

This is why, as a professional caregiver, I view my primary task as a capacity-builder. Sure, I want to help them overcome their immediate problems. As a Christian counselor, I want them to deal with the moral dimensions of their struggle. But even more, I want them to build their spiritual and neural capacity so that, in the future, when faced with daunting “bullies” they’ll be able to fight back!

Now, the Bible doesn’t use the terminology of 21st century neuroscience to describe life. “Capacity” is not a term you’ll find in a concordance. However, the concept is very much a part of Scripture. Notice this example, from 2 Peter 1:

Instead of the word “qualities” I like to substitute “capacities.” Faith, goodness, knowledge, self-control, etc. are capacities that (when we possess them “in increasing measure”) make us more effective and productive in our Christian lives.

So how can we grow our neuro-spiritual capacity? It’s a big topic—one I can’t fully develop here. I’ll have to tease you a bit and point you in the right direction. When Christians talk about capacity-building it’s radically different from what Charles Atlas described. For Angelano “Charles Atlas” Siciliano, physical capacity meant that he learned to rely more on himself (and grow more confident in) his own power to fight the bullies.

But the Bible teaches a radically different method. The Apostle Paul captured the essence of God’s “Dynamic Tension” approach in these words:

To keep me from becoming conceited because of these surpassingly great revelations, there was given me a thorn in my flesh, a messenger of Satan, to torment me. Three times I pleaded with the Lord to take it away from me. But he said to me, “My grace is sufficient for you, for my power is made perfect in weakness.” Therefore I will boast all the more gladly about my weaknesses, so that Christ’s power may rest on me. That is why, for Christ’s sake, I delight in weaknesses, in insults, in hardships, in persecutions, in difficulties. For when I am weak, then I am strong (2 Corinthians 12:7-10).

Allow me to paraphrase Paul here:

God looked at me and said, ‘Hey Skinny! Yer spiritual ribs are showing.’ Then God said, ‘But that’s okay because I’m going to do something for you that you can’t do for yourself. You feel weak? You want to quit? You prayed and prayed about your ‘thorn in the flesh’ and it wouldn’t go away, no matter how hard you tried to deal with it yourself. Guess what? My grace is all you need. And the way you can access my grace is to boast in your weakness—to gladly admit how much you need me and then live in the assurance that when you feel most weak, then you can be most strong.’ 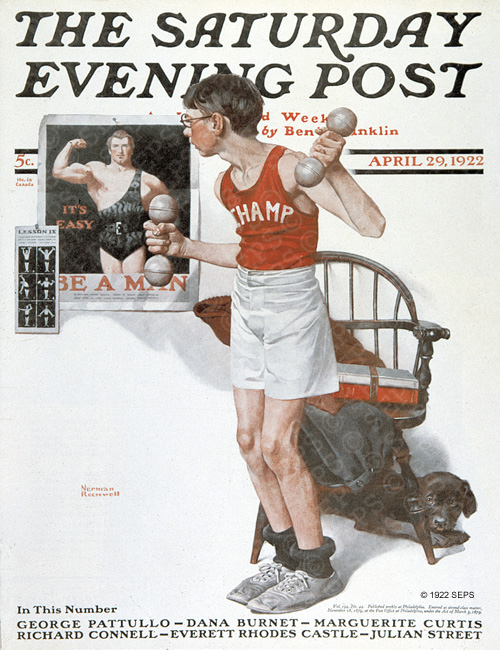 God’s method of capacity building does not rely on making us more self sufficient and self reliant; rather, God’s method makes rely less upon ourselves and more upon Him. His plan is to use the very bullies kicking sand in our faces to show us how much we need Him. This doesn’t mean He wants us to live in defeat or failure. But it does show us how we’re going to be able to stay on course and grow strong—not because of our own power but because of the power of God invading us from outside ourselves and doing things in and through us that we could never do on our own.