Book Review: On the Internet 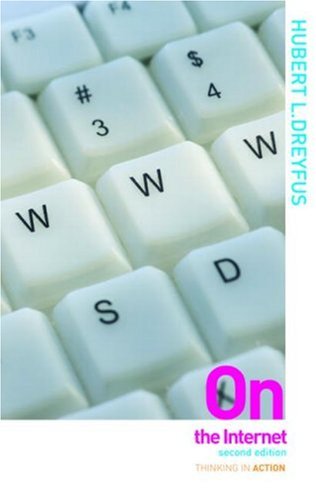 Is the Internet diminishing or enhancing community? Does the Word Wide Web help us feel more connected or less? Is distance education through Internet media making knowledge more available, or is it robbing people of face-to-face learning experiences? Are online communities real communities? These are the sort of  questions raised by Hubert Dreyfus’ On the Internet.

If one ever wondered what influential philosophers like Soren Kierkegaard, Friedrich Nietzsche, or Martin Heidegger would have thought about the World Wide Web, On the Internet is the first, and perhaps best, place to look. Dreyfus is a leading existential philosopher who offers a compelling and persuasive assessment of the Internet’s benefits and limitations.

If you are one who looks to the Web for a disembodied world of ubiquitous learning, connection, and meaningful life, Dreyfus’ book is a friendly killjoy.

What this book is and is not

On the Internet is primarily a critique of cyberlibertarian principles. Dreyfus cites the authors of the 1994 document, “Cyberspace and the American Dream: A Magna Carta for the Knowledge Age,” or the more “far out” example of the Extropy Institute. These groups look with great optimism to the world of cyber technology. For example, the Extropy Institute optimistically looks to a “posthuman future” when we are no longer limited by our physical bodies. Written on the eve of widespread Internet use, the Magna Carta looks with great expectation to the creation of “electronic neighborhoods,” where “cyberspace will play an important role knitting together in the diverse communities of tomorrow.”

At first it may seem like Dreyfus is positioning straw men to knock down. After all, who really believes computers will utterly replace human teachers? Who believes all can one day receive as good an education via distance learning as being an apprentice to the masters? Who thinks risk-free virtual worlds will some day completely replace the dirtiness of real life? Few would articulate such things.

But Dreyfus’ aim is not to merely question the far-out cyber-utopian thinkers but to help us spot the corners of our own minds where we expect more from the World Wide Web than what it can truly offer. Dreyfus does not see the Internet as a phantom threat, but rather wants to help us balance offline and online life, creating a down-to-earth symbiosis of embodied life and virtual life.

The importance of the body

The primary thrust of On the Internet is the importance the human body and physical presence plays in helping us make sense of the world, acquire skills, build community, and give lasting meaning to our lives. Dreyfus taps his knowledge of cyber technology, epistemology, and educational psychology to show that cyberspace is not the final frontier of learning or meaningful connections.

Hubert Dreyfus, a renowned scholar on the existential phenomenology of Martin Heidegger, brings a philosopher’s mind to bear on the questions of how the Internet is affecting our culture. Citing the work of Maurice Merleau-Ponty, Dreyfus writes of the “intercorporeality” of the human body—our physical presence in a situation which gives a holistic sense of our environment, a sense that is greater than the sum of our five senses.

Dreyfus relates his philosophical ideas to recent neurobiological studies about mirror-neurons, systems in the brain that specialize in helping us understand and resonate with the actions and emotions of others, as well as the social significance of those actions (pp. 113-115). Using current research from roboticists, Dreyfus powerfully argues that the best technology cannot simulate this crucial social/physical dynamic (pp. 54-57). In other words, we need face-to-face interactions to carry on meaningful lives.

Dreyfus fails to cite a variety of opponents to his positions. Certainly many would feel like their online communities are not deficient. Many would say that the Internet has not decreased their awareness and involvement in worthy causes, but rather increased them. Many would believe their online friendships to be just as “real” to them as face-to-face friendships. Dreyfus does not engage with these opinions, but rather launches his analysis on the basis of his philosophical interests.

Dreyfus praises the limited benefits of distance learning, but he neglects to mention how schools have tried to overcome obstacles in distance education, creatively weaving together distance lectures, face-to-face apprenticeship, on-site teaching, and Internet discussion forums. The more virtual schools have begun to see the need for interaction among students and professors, the more they have begun to put in place measures to bring this about.

Dreyfus at times misrepresents the Christian/Biblical worldview as being anti-body. Dreyfus claims that Christianity and Platonism share a common desire to get rid of the body to arrive at an ideal disembodied state (pp. 143-144). Speaking of Nietzsche’s battle with Platonism’s and Christianity’s vision of immortality beyond the body (p. 6), Dreyfus neglects to mention the strong tradition in biblical Christianity of resurrection, a belief that affirms an eternal, albeit glorified, physical state. God not only affirms the value of the body by giving it immortality, but (using Heideggerian terms) by bringing divinity together with humanity.

A great start to a great topic

Some might think it ironic I found Dreyfus’ critique refreshing. I make my living as a corporate blogger, I am earning a degree via distance education, and I met my wife on eHarmony. I like the Internet. It is where I spend a great deal of time. But being immersed in the virtual world, I  cannot help but enjoy the overall thrust of Dreyfus’ book. The Internet is a wonderful tool, but it is no replacement for real-life, flesh and blood community.