Why Christians Should Appreciate Hanukkah

Why Christians Should Appreciate Hanukkah

One of my favorite verses in Scripture is found in the book of Daniel:

“The people who know their God
shall stand firm and take action” (Daniel 11:32b).

I love it because it reminds me that knowing about God is not the same as knowing God intimately. The people who really know their God will be marked by a new heart and a bold, courageous stance. No one can truly meet God and be the same afterward. 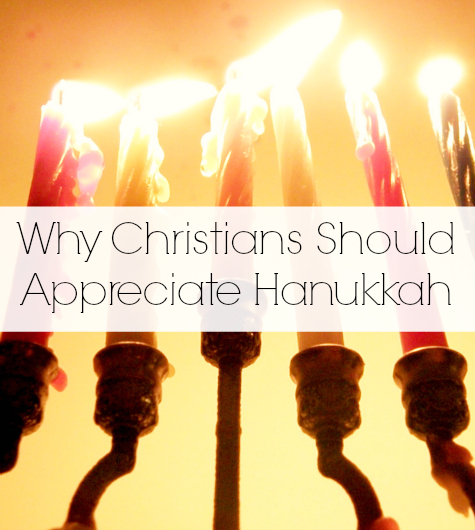 This verse could easily find its way on to a commemorative plaque or Christian poster, a short, quotable platitude that inspires for a moment but becomes a mere decoration on our wall. To avoid this from happening it is helpful to actually take a look at the context of this verse.

The verse comes from Daniel 11, a chapter of some of the most startling prophecies in the Bible. An angel from heaven is giving Daniel a panoramic picture of the future kingdoms that will rise and fall after his day. He goes through different political and military figures one by one.

The History of Hanukkah

It is generally agreed by many Bible scholars that Daniel 11:21-35 is prophesying the reign of one of the great Syrian-Greco kings, Antiochus IV. The verse describing “the people who know their God” is actually a prophecy about the faithful Jews who boldly stood against this wicked king in a most desperate hour.

The land of Israel was under foreign rule since the time of the Babylonian exile. In 198 B.C., it was the Seleucid Empire that controlled Palestine. In 175 B.C. Antiochus IV ascended the throne. The books of I & II Maccabbees, the Talmud, and some Greek sources give us a picture of what this king was like.

He was given the name Mithridates at his birth, but took the name Antiochus after he assumed the throne of his father, Antiochus III. He called himself Antiochus Epiphanes, meaning “the visible god,” or “god manifest.” Some of his contemporaries, instead of calling him Epiphanes, called him Epimanes, “the Madman.” Antiochus believed that he was an incarnate deity.

On December 16, 168 B.C., Antiochus entered Jerusalem with 22,000 soldiers on a supposed peace mission. They attacked Jerusalem on the Sabbath day, killing 80,000 men, women, and children. They plundered and burned the city, taking many people as slaves. He instituted new laws that forbade certain Jewish practices on the penalty of death.

He also set up what the prophet Daniel called “the abomination”: he established an altar to Zeus on the altar of burnt offering and set up a statue of Zeus in the temple (which bore a striking resemblance to Antiochus himself). He then offered a pig on the altar and splattered its blood inside the Holy of Holies. Following this, the Jewish priests were required to sacrifice a pig in the temple on the 25th of every month to celebrate Antiochus’ birthday.

With great heroism, a band of zealous Jews refused to worship the Greek gods and formed a guerrilla army to take back the city. Led by a priest named Mattathias, this group made repeated attacks against the Seleucid army. When he died, his son Judah, took leadership of the group of rebels. He was called by many Yudah ha Makkabi, “Judah the Hammer.” Later these men were known as the Maccabeans.

Three years to the day after Antiochus IV desecrated the temple, on the 25th of Kislev, the Maccabbeans finished taking the city back. They marched into Jerusalem to reclaim the temple and dedicate it to God. To this day, the 25th of Kislev is known as the beginning of the Feast of Hanukkah, meaning, “dedication.” It is rightly a celebration of how some of God’s faithful believers stood firm against evil and fought for the sanctity of God’s temple.

A Zeal for God’s House

The point of this post is not about whether Christians should celebrate Hanukkah, but there is something God desires to teach us through this powerful story of military triumph.

Hear God’s commentary on this episode of history: “the people who know their God shall stand firm and take action” (Daniel 11:32). The Maccabbeans serve as an example for us of what happens when a group of people truly know God: they wage war against anything that would defile God’s temple. Like Jesus, the Maccabeeans were people who were consumed with a zeal for God’s house (John 2:17).

Are we consumed with the same zeal?

There was only one thing that set God’s temple apart from all other structures: the presence of God. While God is present everywhere, there have been times when God chose to gloriously manifest His presence and truly live among His people.

Why does God want to come to live among us? Because it was always God’s plan to do so. He showed us a glimpse of this dream in Eden: a world where God and man lived in real harmony. Man worshiped God wholeheartedly, and God richly blessed man with his love and favor. God walked with man in the garden. After the entrance of sin, the rest of the story of Scripture is God’s plan to restore this dream again.

As we look through the Old Testament and we read about all the rituals, the sacrifices, and the elaborate design of God’s house, we should not miss the big picture: God has come to live among us. The very fact that God would choose to come and dwell among unworthy people is itself an amazing thought.

Having a zeal for God’s house is not first and foremost about a building, but about guarding the sacred place God has chosen to be worshiped, the place where man and God can meet face to face.

The sad reality is that God eventually abandoned His own house because of the idolatry of His people. God warned Israel that they would forsake Him, they would break the covenant He made with them by worshiping other gods, and as a result God would not longer dwell among them. He said through Moses,

“Then my anger will be kindled against them in that day, and I will forsake them and hide my face from them, and they will be devoured. And many evils and troubles will come upon them, so that they will say in that day, ‘Have not these evils come upon us because our God is not among us?’” (Deuteronomy 31:17).

The prophet Ezekiel saw a vision of this very thing happening: the glory of God departed from above the temple and left the city (Ezekiel 10:4,18-19; 11:23).

Today, God has chosen a new temple in which to live: the community of the church. Just like the days before the temple in Jerusalem, God’s glory is not in a stationary building, but amidst living stones, his covenant people.

Do we have a zeal for God’s house like the Maccabbeans? If we are people who truly know our God, we will “stand firm and take action” (Daniel 11:32) against anything that will defile God’s temple. God has chosen the church as His new temple: do we zealously guard against any idol working its way into our ranks?

How to Recognize an Idol

Antiochus IV came into the temple violently and took the altar of God by force, but in American Christianity idols come into the church community in less pronounced and obvious ways.

Do we have the wisdom to recognize these idols in our lives when they are there?

Listen to the following audio clip from a sermon by Mark Driscoll. It is about 13 minutes long. (You can read the transcript here.) As you listen, begin a time of serious introspection. Is God your first love, or has an idol replaced Him?

What Are We Living For?

Why did the Maccabbeans have such zeal to take back the city and the temple? Read the words of the priest Mattathias after he saw the denigration of the city:

“Woe is me, wherefore was I born to see the ruin of my people, and the ruin of the holy city, and to dwell there, when it is given into the hands of the enemies? The holy places are come into the hands of strangers: her temple is become as a man without honor…And behold our sanctuary, and our beauty, and our glory is laid waste, and the Gentiles have defiled them. To what end then should we live any longer?” (1 Maccabees 2:8-13).

The text goes on to say that Mattathias and his sons rent their garments and covered themselves in sackcloth and lamented with loud voices.

What a powerful statement from the lips of these priests! When they saw the temple defiled by idol worshipers they asked, “To what end then should we live any longer?” What else do we have to live for?

I pray that from his glorious, unlimited resources he will give you mighty inner strength through his Holy Spirit. And I pray that Christ will be more and more at home in your hearts as you trust in him. May your roots go down deep into the soil of God’s marvelous love. And may you have the power to understand, as all God’s people should, how wide, how long, how high, and how deep his love really is. May you experience the love of Christ, though it is so great you will never fully understand it. Then you will be filled with the fullness of life and power that comes from God. Now glory be to God! By his mighty power at work within us, he is able to accomplish infinitely more than we would ever dare to ask or hope. May he be given glory in the church and in Christ Jesus forever and ever through endless ages. Amen. (Ephesians 3:16-21, NLT)

The audio sermon comes from Jubilee Church in London. It was preached by Mark Driscoll on July 13, 2008.